Growing up, Caitlin found her love for animals when her family took in her uncle’s dog, Gretta, after he moved and could no longer keep her.

“That poor dog probably got tired of me smothering it with hugs,” says Caitlin, the business manager in the Division of Applied Social Sciences. “Something about animals and their unconditional love and their innocent nature drew me to them.”

It was this affection for animals and interest in their welfare that led Caitlin to seek out volunteer opportunities with No Kill Columbia. In 2014, she received an email from the organization looking for volunteers for an art auction.

“I thought, ‘I’ll give it a try; you never know what you’ll find,’” says Caitlin.

Caitlin started volunteering originally with their art auction, Art Unleashed. The goal, at the time, was to raise enough money to open a low-cost spay and neuter clinic in Columbia, Missouri.

No Kill Columbia accomplished their goal and the clinic was opened in April of 2015. The clinic focuses on offering low-cost, but high quality services. Besides offering spay and neutering services, the clinic also offers microchipping, vaccines and will even lend cages to help capture feral cats. There is no income or residency requirements to use the services of the clinic. 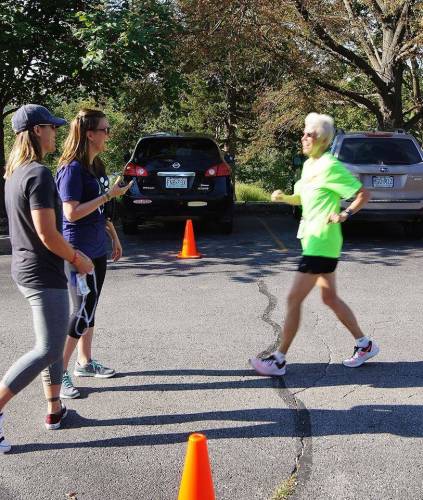 “My favorite part of volunteering is the people,” says Caitlin.

She said it was the people that sucked her in and made her want to continue volunteering after her first meeting.

Caitlin, who has two dogs herself, Bailey and Zoey, soon found herself giving even more of her time to the organization.

Treats Unleashed, a company that specializes in all-natural pet foods and treats, hosts a Pet Expo every year in Columbia. No Kill Columbia decided to host a 5K run and walk in combination with the Pet Expo event. Caitlin was in charge of planning the 5K and has been doing so ever since 2014.

She recently finished up her fifth year of planning the 5K; this year’s event was held at Stephens Lake Park Aug. 25 and around 50 runners and walkers participated. Runners and walkers are encouraged to bring their pets to the event and can enjoy pet-friendly activities after the 5K, like painting with your pet’s paw prints.

During her five years of volunteering with No Kill Columbia, Caitlin has witnessed considerable growth for the organization.

“When we started fundraising, we didn’t have the clinic,” Caitlin says. “We were fundraising for it to start. The clinic opened in April of 2015 and so it was really neat to actually see what all of our fundraising actually went to and to see the success of the clinic.”

In August, the clinic completed the most number of surgeries for one month, finishing with a grand total of 321. To date, the clinic has completed more than 8,000 surgeries.

“It’s really neat to see something you’ve been fundraising for for years finally come true and see the physical building and know that they are helping so many pets,” says Caitlin.

“It’s so amazing to know that there are 8,000 animals in Missouri now that have a better quality of life. Spay and neuter actually extends their life and eliminates their chance of getting testicular or ovarian cancer.”

The clinic hasn’t received any government funding and has been successful, in part, due to volunteers like Caitlin.

“It’s just really cool when you step outside of your box and see what you learn, who you meet and how many connections you can make,” says Caitlin.

To learn more about volunteer opportunities with the Spray Neuter Project and No Kill Columbia, visit the organization’s website here, or send an email to www.nokillcolumbiamo@gmail.com.