Renee Adler is working toward a master’s degree in Plant,… Expand ▸

Each year, Kelly Nelson advises a handful of University of Missouri graduate students who are doing a variety of projects at the Greenley Research Center. Those students not only gain valuable research experience, they get hands-on opportunities and chances to interact with local producers. 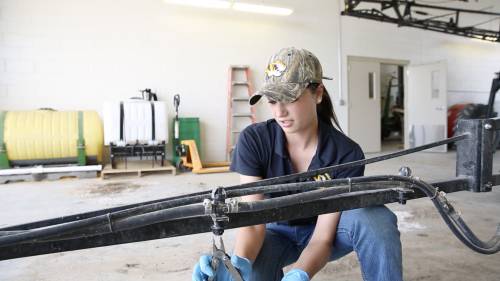 It’s an experience that Renee Adler does not take lightly. Adler is working toward a master’s degree in Plant, Insect and Microbial Sciences (Division of Plant Sciences) with a focus on crop, soil and pest management. Adler earned a bachelor’s in agricultural systems management (Division of Food Systems and Bioengineering), with minors in plant sciences and soil sciences.

“Plants are cool – they’re really cool,” Adler said. “I always had an interest in plants, and my goal is to be an agronomist. I can’t grow flowers to save my life, but I can grow corn and soybeans. What I like about plants is that there is a lot of research being done – but still so much work to do. There is such a good foundation. I believe crops are at the center of the agriculture system.”

Adler’s undergraduate degree served her well when she arrived at Greenley. Already adept at working with machinery, Adler broadened her horizons at the Center.

“I didn’t think that when I got to graduate school that I would learn the kinds of things that I have,” Adler said. “One of the first weeks, I was asked if I had done any carpentry. We were going out to build a shed. I quickly learned about electrical work as well. I never thought I would be doing these things during my graduate work.

“I’ve obviously learned a ton about agronomy, too. Kelly has done an exceptional job of teaching his students that in order to help producers, you need to be able to put yourself in their shoes. These are the type of things they deal with.”

Adler, who grew up in Wentzville, has three research projects at Greenley, all of which focus on implementing conservation practices into cropping systems in a way that is economical for farmers and good for the environment.

“We want our local producers to be able to implement a conservation practice into their system and have a strong economic return,” Adler said. “We’re located on claypan soil, so they’re different. Just because something works in Georgia, for example, doesn’t mean it will work here. We need solutions for northeast Missouri. That’s what we’re doing here.”

Two of Adler’s projects are centered on cover crops. The first is an experiment looking at overseeding cover crops at different timings of a standing crop. Adler is overseeding 15 cover treatments, including monocultures and blends, into corn at three growth stages – V5, V10 and VT. The cover crops are being overseeded into soybean at the R6 growth stage, too.

The second cover crop study is looking at the impact of cover crops on nutrient loss in a tile drainage field. There are six terraces in the field. Three of the terraces have cover crops and three do not.

“It’s a simple design,” Adler said. “We’re working to see how the cover crops affect the nitrogen, phosphorus and total suspended solid loss in the field. We are also monitoring tile flow data from each individual terrace to determine if the cover crop has an impact on the amount of water coming off the field.”

“The goal here is to find the best cropping system for a farmer,” Adler said. “We’re working to gain a better understanding of the economic impact that the crops could have for farmers who implement one of these systems. We’re also looking at the soil chemical properties within the study, as we want to see positive environmental aspects.” 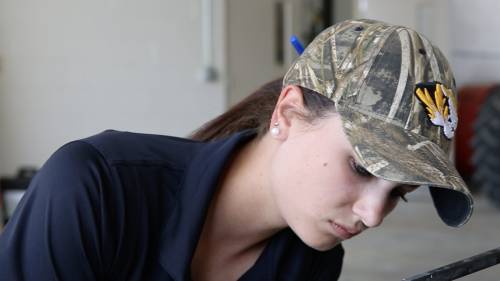 Research has been a major part of Adler’s collegiate career. She began doing laboratory research as a freshman as part of the Freshman Research in Plant Sciences (FRIPS) program. She worked for Randy Miles, an associate professor emeritus in soil science, at Sanborn Field and worked as a lab assistant at the MU Soil Health Assessment Center. She also gained valuable experience in the Soybean Biochemistry Lab.

“Those experiences were really valuable,” Adler said. “Each stop taught me ways to really keep track of information. That has been important as I’ve moved to the field during my graduate work. There are several small things that can interfere with data collection, so it’s incredibly important to keep track of everything. It was also key to see how the lab works.”

Adler has also had the opportunity to share her research with local producers during field days and other similar events.

“It’s critical for our students to gain this experience,” Nelson said. “They’re looking to be an expert in their field and tough questions are part of the job. You can only prepare them so much. Experience is key. They’ll carry the baton from this point on.”

“It’s really exciting,” Adler added. “It’s also nerve-racking. We’re giving information to people who have been doing this their entire life. They’re the expert and have been doing it for years. I learn a lot more from farmers than they could ever learn from me, honestly.”

Adler was named CAFNR’s Outstanding Senior in December 2016. She was part of ASM Club, Alpha MU, Independent Aggies, Mizzou Collegiate 4-H and was involved in CAFNR Week as well. It was actually a friend from Independent Aggies who encouraged Adler to check out the Greenley Research Center for her graduate work.

“CAFNR was the best decision I ever made,” Adler said. “I’ve developed so many different professional skills. The people in CAFNR really pushed me to get where I needed to be.”

Nelson’s graduate program is very hands-on, allowing the students to take the reins of their projects. 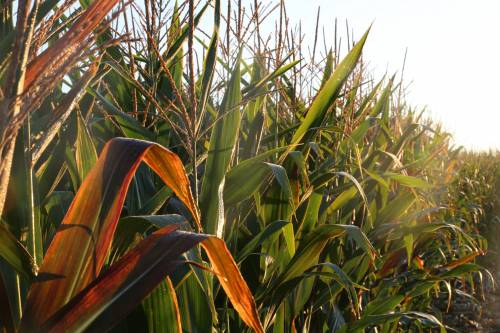 Adler has also had the opportunity to share her research with local producers during field days and other similar events.

“Renee has been a tremendous asset to MU and to our program at Greenley,” Nelson said. “She has stepped in and taken a leadership role right away. She takes ownership of her research and is very passionate about what she does.”

In an attempt to gain even more experience and put herself in the shoes of a producer, Adler recently bought a farm of her own.

“Owning a farm has been humbling,” Adler said. “It’s one of the coolest things I’ve ever done but also one of the scariest. I want to be able to relate to farmers. It’s tough to tell people what to do when you’re not doing it yourself. You need to practice what you preach. Kelly has taught us the importance of that. We’re not going to preach something unless we know it’s good for farmers and will help them out. You can’t ask somebody to do something that is going to cost a lot of money and may not benefit them.”

“I’m grateful for the experiences that Greenley has given me because it’s helped me develop as a professional, as an agronomist and as a person,” Adler said. “Ultimately, the experiences here will help me develop as a producer after I graduate. We’re out in the field, with boots on the ground, doing real farming that makes a real difference. If developing better producers doesn’t define the College of Ag, I don’t know what does.

“If anyone is interested in plant science and hands-on experience, Greenley is the place for them. I know I may be biased, but I think Greenley has the best graduate program at Mizzou.”