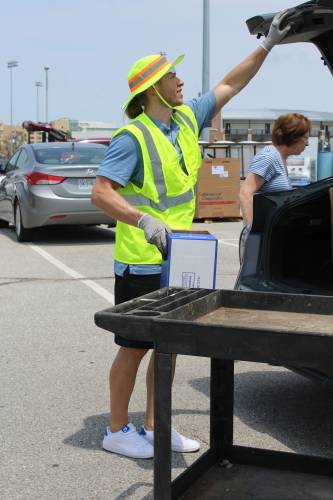 It was only after the City of Columbia’s December 2017 Volunteer of the Month had accumulated, as he puts it, “a bunch of” speeding tickets that his volunteer work with the city began.

Every other weekend, one can typically find Michal Zigo, a post-doctoral fellow in animal sciences, cleaning up parks and streams around Columbia. According to Michal, going out and spending a day disposing of tires or clearing out truck-loads of garbage from the side of a road is his way to unwind and help the community where he has lived for the past four years.

“It’s my hobby I would say. I find it relaxing,” he says.

Born and raised in the central European country of Slovakia, Michal moved to Prague, the capital of the neighboring Czech Republic, in 2004 where he received his undergraduate and graduate degrees at Charles University, and went on to get his Ph.D. in Biochemistry there in 2014. The next year, Michal moved to Missouri to begin his post-doctoral fellowship, working in the lab of his mentor, Peter Sutovsky. Also from Slovakia, Sutovsky is a professor of animal sciences and renowned reproductive biologist who came to Columbia in 2001.

In Sutovsky’s lab, Michal performs basic research on reproductive physiology. However, doing mostly intellectual work in a lab for over 40 hours a week, Michal does not get much time to work with his hands. So, volunteering with various groups and organizations throughout the city has been the outlet he needed and has allowed Michal to get out and connect.

“It’s always fun,” Michal says. “I never ever get bored.”

However, Michal hasn’t always been the star volunteer of the city. As it turns out, the Missouri State Highway Patrol is not as lenient when it comes to speeding as the authorities in central Europe, a lesson Michal had to learn “the hard way,” he says.

As a result of his accumulated speeding tickets, he was given community service. Yet Michal quickly discovered that his punishment was not much of a punishment at all.

Through his hobby, Michal has been able to not only get out of the lab but also has been able to get to know people from a variety of backgrounds. Michal has become a trained Recycling Ambassador for the city — another way of saying that he teaches anyone who will listen about how to recycle and the importance of doing so. Michal describes this work, just as he does all of his volunteering, as “rewarding.” He has also volunteered for events through Columbia Parks and Rec, and Household Hazardous Waste Collection.

While Michal recognizes that many people don’t believe they have the time to volunteer, he says for people trying to find a way to fit such work into their busy schedules that “it’s all about priorities” and advises people to “know where to arrange those priorities and find yourself a time.” Even in the face of the disheartening reality that there will always be more work to be done.

In south Columbia there is a road that winds through a hilly tree-lined stretch of land, offering picturesque views of dense foliage and wide grassy plains. However, Rock Quarry Road is also known for the piles of garbage that accumulate alongside it. For this reason, last March there was a cleanup effort to rid the road of its litter. Michal participated in this event along with other volunteers, and together they managed to clean up a whole truck load of it from the site. Yet, when Michal drove down that same road only a week later, it looked as if the cleanup had never happened. In times like these when the hard work appears to have been for nothing, Michal says that “you have to approach it with a positive attitude.”

As for Michal, he has no plans to stop helping out around Columbia any time soon. He is always waiting to hear about new opportunities to do so and is ready to get to work “whenever they need my help.”

Michal encourages everyone to volunteer when they can. To learn more about volunteering opportunities with the City of Columbia, visit the city’s website, call 573-874-7499 or send an email to volunteer@CoMO.gov.