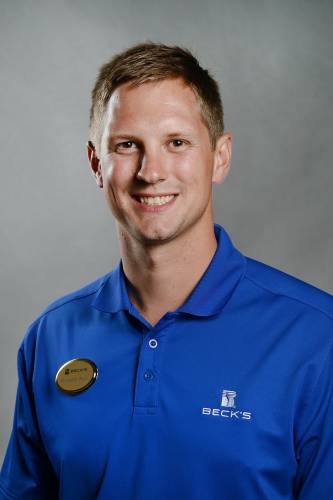 When something matters to you, you figure out how to support it, says Brandon Thiel.

Brandon is a 2012 graduate of the College of Agriculture, Food and Natural Resources with a degree in plant sciences – crop management. He started giving back to the college soon after graduation. “It’s small gifts,” he says. “But they all add up.

“Hopefully, as loans are paid down, and we climb the business ladder, we find ourselves able to give a little more and more each year – but you have to start somewhere,” he says.

And it was his “start” after graduation that he appreciates most from CAFNR. He says without hesitation that job placement was the top benefit he received from the college.

“There is no doubt that employers glance over other schools,” he says. “But they pay close attention to what the College of Ag at Mizzou is doing, and they get very excited about hiring those graduates.” Brandon says he uses information learned in his degree program daily at his job as a seed representative with Beck’s Hybrids.

“During my four short years at CAFNR, I felt like the college and the University of Missouri provided me with a strong education full of very resourceful professors who certainly had mine and their other students’ best interests at heart. They put more effort into their classes than any other class that I sat in across the university system. And the research – so much research from the state is conducted at the college, and our classes incorporated that research directly into the classroom,” Brandon says. “I had a great experience at the college and at the end, working with the career development team in 2-64 [Ag Building], I was blessed with many career opportunities during my senior year at the Career Fair.”

He says he knows that there are a lot of pulls on the pocketbook for young alumni, but he challenges all of his peers – including the class of 2018 – to set aside even just a few dollars for CAFNR to say thank you and provide for the next generation of students.

“I’d say as a general rule with giving, only give to things that truly matter to you. But if they truly matter, make sure to find a place in your budget for them,” he says. “So I’d ask any alumni, young or old, to take a look back at your education from CAFNR, and ask yourself what that education was worth to you. That answer’s going to be very different for everyone, but it’s an answer that found me giving some to the university and the college.

“Someday I hope to see the next generation attend the university and CAFNR. My gifts, while small, but in combination with many other donors, will help keep CAFNR as the top agriculture program for undergrads in the state, and among the best in the nation.”