Curtis Ransom spent his childhood following his father around agricultural fields as his dad worked with farmers to grow a productive crop. The fields Ransom conducts research in now look a little bit different than those previous fields.

Ransom was born in Nairobi, Kenya. His father Joel, who serves as an Extension agronomist and professor at North Dakota State University, worked with the International Maize and Wheat Improvement Center (CIMMYT) during Ransom’s youth. CIMMYT is an international non-profit agricultural research organization, one that featured Norman Borlaug and his wheat research.

It was those early agricultural experiences that made an important impression on Ransom.

“I loved biology,” he said. “I remember counting wheat heads in fields with my dad, doing a lot of that type of work. I probably caused more havoc than I actually helped, but those experiences really led me to an interest in research. I wanted to work in a lab.” 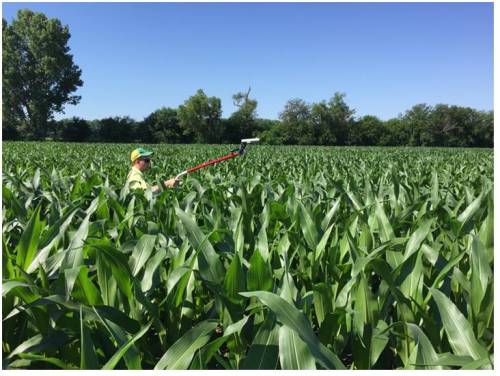 Ransom, a postdoctoral fellow in the MU Division of Plant Sciences, has been conducting research since his undergraduate days at Brigham Young University. He earned his undergrad and master’s degree in environmental science at BYU before receiving his doctorate in plant sciences from Mizzou.

Ransom recently received a grant from the National Institute of Food and Agriculture to build upon his doctoral research. The grant will allow Ransom to research enhanced crop growth modeling with a goal of improving corn nitrogen recommendations for producers across the U.S. Corn Belt.

“It’s really exciting to be able to continue this research,” Ransom said. “It’s exactly what I wanted to do; stretch my skills in another area. There is quite a bit that can be done from this research.”

Ransom’s doctorate research was a multi-state project that included eight universities. The goal was to develop new and more efficient ways to manage nitrogen. The project featured several graduate students, each one studying a different aspect of the nitrogen application process.

Ransom was evaluating numerous tools farmers can use, one of which was a crop growth model. Models of this nature can simulate behavior of real crops by predicting the plant growth response to environmental and management factors. The model can help predict possible harvestable yields as well.

“There are a lot of different tools and techniques farmers can use to come up with a nitrogen recommendation,” Ransom said. “Traditionally, farmers have put enough nitrogen on to carry them through the growing season. However, we’ve learned through various research that having a management plan is key to nitrogen management.”

Ransom said nitrogen is one of the highest input costs for farmers – but it’s incredibly difficult to know how much nitrogen to put on a field, as well as when it should be used in order to optimize yield and the net return on investment.

“If you put too much on, you’re not going to get the increase in yield,” Ransom said. “At that point, the farmer is paying for something that isn’t benefitting his operation. It’s the same with putting too little nitrogen on. In that case, you’re not optimizing what you have. It’s definitely a balancing act.

“You could also have a large variation within one field. You may need a lot in one area and not as much in others. It’s a complex problem.”

The timing of nitrogen application is important as well. The goal is to be responsive to the situation presented. The weather also plays a key role in application.

“Putting it down in the fall is still a big practice for farmers,” Ransom said. “The fertilizer is a little cheaper and there’s not the pressure to get it done in a certain timeframe. Some farmers put it down right at planting and hope for the best. The current push is for farmers to put nitrogen down in season. If you wait a little bit, you are able to take into account more of the current season’s weather into the nitrogen fertilizer rate decision. If the field doesn’t need it, you save money. If it does, you have time to apply it.

“There are some challenges with doing in season applications as well. If you wait and it’s really wet, you may miss out completely. It can be a challenge. And farmers always want to see green corn.”

The entire project was funded by DuPont Pioneer. Ransom’s advisor, Newell Kitchen, helped bring the universities together for the study. A lot of soil sampling was involved, as the MU crew was in charge of going to each state and characterizing the fields where the plot research took place.

“We sent all of the site characterization samples to the Soil Health Assessment Center here at Mizzou,” Ransom said. “It was nice to have a standardized approach, as well as one place handling the samples. That was done to minimize error.”

Each university was in charge of planting the corn and doing the fertility applications. They also took the soil samples during the season. Ransom was part of the team that went out after the season and took additional soil samples to look at how much nitrogen was left in the soil after harvest.

The plots used at MU were located at the South Farm Research Center and near the Bradford Research Center. There were also three plots in the river bottoms near Jefferson City and one near Salisbury.

Ransom said that the model he was researching didn’t perform as well as he expected. They have made some tweaks and are ready to attack it through the new grant.

“It’s a unique dataset,” Ransom said. “Once I finished my doctorate degree, I was hoping to have the opportunity to dive back into this model. It’s exciting.”