The world today requires a different level of collaboration and partnership, said Sarah Geisert, as part of her visit to the Mizzou College of Agriculture, Food and Natural Resources April 4-5. 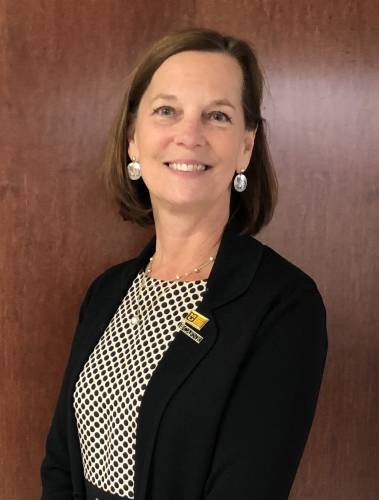 She participated in a food industry roundtable and spoke to seven classes during her time on campus, including courses in agricultural economics, food science and soil science, as part of CAFNR’s Robert O. Reich Executive-in-Residence program. The program brings industry leaders to the college to share knowledge and experiences with students, faculty and staff. Through class lectures, roundtable discussions, one-on-one meetings and other informal interactions, students learn first-hand about career paths and choices.

Geisert received her degree in food science from CAFNR in 1981, and went on to get a master’s in food science at the University of Nebraska in 1983. She joined General Mills in 1983, spending 32 years there in a variety of roles and departments including Research and Development, Operations and, most recently, Quality and Regulatory Operations. In her last position, covering 10 years, she was responsible for leading General Mills’ global product safety and regulatory affairs department. This department had responsibility for leading the establishment of food safety and sanitation standards and the assessment and measurement of product safety risk. She had direct responsibility for leading the food safety incident management team and represented General Mills’ external interests in numerous scientific, trade and regulatory associations.

She said she hoped to help current students understand the impact and breadth of their chosen careers in food and agriculture.

“I just want students to see the bigger picture – food and agriculture, to me, they are basic needs. It’s a global impact,” she said. “They may choose to operate as an expert in an area – but have that ability to see, for example, that a drought in Russia impacts the food prices in Mozambique.

“As they continue their journey, I hope they will look outside their majors and think more broadly about the opportunities and impact they can have. Focus on your expertise and your passions, but just have a little bit more of a global view.”

Geisert, who lives in Minnesota, also is a member of the CAFNR Alumni Association Board of Directors. Her family has a strong history of attending Mizzou and CAFNR – her grandfather, Ben Geisert, graduated in 1915 with an agriculture degree and her grandmother, Cora Schultze Geisert, in 1916 with a B.A. in botany; her father James also received an agriculture degree, in 1958. She also has had aunts, uncles and cousins all go through Mizzou and CAFNR; her family had season football tickets for close to 60 years. Geisert had many memories of visiting campus as a child. When it came time to pick her college, she recalls her parents saying of universities other than Mizzou – “You can go there your sophomore year” – not, no, you can’t go anywhere but Mizzou, but, just not yet.

She said she enjoyed the opportunity to come back to campus and connect with the next generation of students as an Executive-in-Residence. 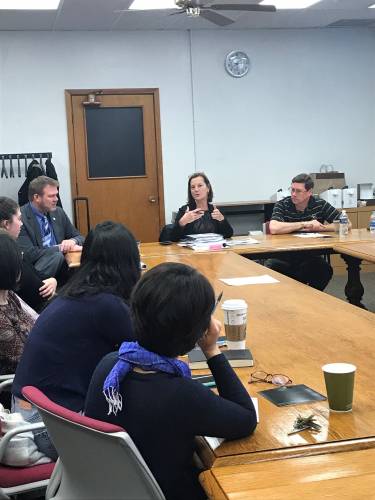 For her, it was “the power of one teacher” while at Mizzou that made a big impact on her career – Dennis Gordon, who at the time was a professor of nutrition and food science.

Geisert had been studying general agriculture, and also worked on campus. Her junior year, Dr. Gordon needed a lab worker – everyone said “No one can work for him.” But Gordon’s personality clicked with Geisert’s and before long she’d changed her major to food science – he also encouraged her to get a master’s degree.

Geisert said what she enjoyed most about her career in the food industry were the people she worked with.

“Leading people was most rewarding; developing people. It comes down to the people,” she said.

The diversity and complexity of the industry easily kept her interest for a long, successful career – you “can never get bored,” she said.

“In food science, where you start is not necessarily where you end,” she said. “Your major doesn’t define you – it’s your point of entry. They care about you being able to work with people, be part of a team, and to help whatever company you’re working for be successful. We hire you because you’re smart; we keep you because you’re able to help us grow and deliver the results we need.”

She said sometimes students get worried about their career trajectory, even before it begins. She said the important thing is to not fret about what’s next, and excel in what’s now.

“Focus on what you’re doing now, and doing it really well, and what’s next will come,” she said. “You do this well; opportunities will come. I never knew the job I currently have even existed! You don’t know what you don’t know. But be open to possibilities.”

It’s an exciting time to be part of the inter-connected fields of food and agriculture, she said – now is the time to think about how everything works together and can work better together – in the industry and at universities, too. And just the food industry itself has always fascinated her.

“Everyone eats. Everybody wants to know about food. Everybody has an opinion about it,” she said. “People are amazed at what it takes to deliver brands that customers trust.

“It’s diverse, it’s complex, it’s global. It touches everyone. It’s in every economy of the world. It’s fascinating! How could you not love food?!”