Pollinators and other beneficial insects play an important… Expand ▸

Pollinators and other beneficial insects play an important role in the agricultural world, especially in terms of economic value for growers. A study conducted by Cornell University showed that crops pollinated by those beneficial insects contributed $29 billion to farm income in 2010.

Unfortunately, several of those insects are facing population declines due to a variety of factors. A team of researchers from the University of Missouri College of Agriculture, Food and Natural Resources is looking at the role neonicotinoid insecticides play in arthropod performance, specifically non-target terrestrial arthropods. Arthropods are invertebrate animals and include insects, arachnids, myriapods and crustaceans.

The team looked at five broad performance measures – abundance, behavior, condition, reproductive success and survival. They recently published a paper of their findings in the journal Ecological Applications. 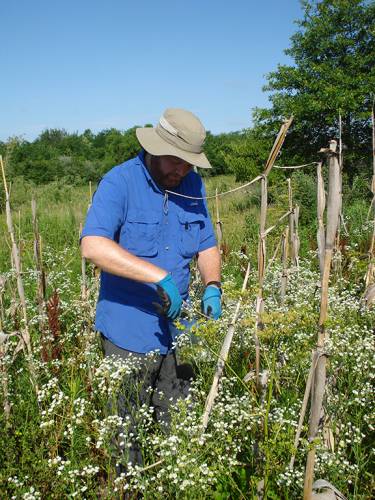 “This research is a quantitative analysis of existing literature,” said Anson Main, a postdoctoral research associate in the School of Natural Resources. “There’s all of this existing literature within the realm of pesticides, specifically neonicotinoids, and while there have been various syntheses done, they’re more about restating what’s been found in the literature.”

Main worked with Lisa Webb, cooperative associate professor in the School of Natural Resources, and Keith Goyne, professor of environmental soil chemistry and associate director, School of Natural Resources. Webb is also the assistant unit leader for the Missouri Cooperative Fish and Wildlife Research Unit, a division of the U.S. Geological Survey. Doreen Mengel, Missouri Department of Conservation, helped with the research efforts, too.

Main said the group began with nearly 2,000 papers relating to pesticides and arthropod response. They were able to condense those papers into 44 field and laboratory studies which dealt with neonicotinoid effects on arthropods.

“We spent a lot of time determining whether each paper was a good fit or not,” Main said. “We ended up with 89 studies that would have been candidate papers. We then narrowed the list down to 44 documents. Other papers were eliminated because of missing information or because we were unable to contact the author to obtain additional, but necessary, information.”

The studies come from across the globe. Work from North America, Europe and Asia was included.

“We tried to have a global perspective instead of limiting ourselves to North America only,” Main said.

After combing through the available studies, the group put together a spreadsheet that tracked all of the relevant information. The performance measures were based on what the literature provided.

“We had a lot of heterogeneous information, and our goal was to distill it down and find what everything actually represented,” Main said. “Some studies recorded the number of species caught in a trap or the number of individuals observed on plant – that’s a measure of abundance. If a study recorded the size of the insect or how much it weighed, that represents a measure of condition.

“We basically made a broad, encompassing umbrella that had a lot of information underneath it. That’s what I think is useful from a meta-analysis – you start to see the patterns that are showing up versus an apples-to-apples comparison.”

Main said neonicotinoid insecticides are the most widely used insecticide class worldwide. They are known for their versatility in application. 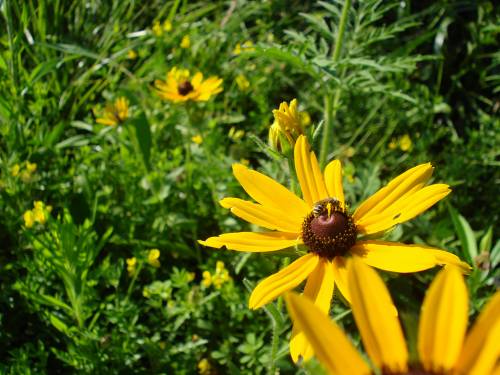 “These insecticides were developed to replace some of the older compounds that were found to be a little more detrimental for humans,” Main said. “Neonicotinoids are effective because they bind to the post-synaptic nicotinic acetylcholine receptors in insects. This can lead to overstimulation of the central nervous system, or even death. All invertebrates have that receptor, so you’re not able to selectively say that the insecticide is only going to target one species. Depending on the sensitivity of some species, it could have a similar effect on many of them.”

Main said that in spite of some of the 44 papers having mixed conclusions, when taken across all studies, the analyses showed similar negative effects to the performance measures being evaluated.

“We thought that there might be one or two measures that showed a stronger impact, but the broad consensus was that neonicotinoid insecticides were showing a pretty strong negative trend,” Main said. “The insecticides didn’t affect just one functional group, like pollinators, either. Detritivores and predator insects were also affected.

“This is useful in the sense that with neonicotinoid insecticides, the majority of the debate has been focused on honey bees. This paper is trying to evaluate patterns of response to neonicotinoids across a range of taxa, not just bees. These insects are providing a lot of benefit to our everyday lives that we don’t even realize. It’s possible that we need to rethink how we do broad applications of these seed treatments – because we might not realize the effect it has on the beneficial insects.”

The research was funded through a cooperative agreement with the Missouri Department of Conservation. Support was also provided by USDA-NIFA through Hatch funding and the Missouri Cooperative Fish and Wildlife Research Unit.

The researchers are also in the process of developing more studies related to neonicotinoid insecticides.

“This is the beginning stage of a large-scale experimental project in the field that we’re doing,” Webb said. “The first step was to review the literature and look for broad trends. We’re pairing that with a study, funded by the Missouri Department of Conservation, to evaluate the impact of using these insecticides on public lands. We’re looking for neonicotinoid insecticide concentrations in both the field soils, but also see if it’s leaching into field margins and what that might mean for pollinators.”

Goyne said they are going to dive deeper into how the insecticides work in various soils as well.

“These insects are providing ecosystem services for free,” he said. “We’re trying to get a more holistic picture of how everything works together and interacts. It’s really important for water quality, too. Understanding how the insecticides move out of the field to these marginal areas is key. There are a number of different aspects that this work is going to help us understand.

“Our main goal is working to help producers and natural resource managers modify their management operations to minimize some of the challenges that beneficial insects face. This is a really strong start.”