A talented musician, Harlan Daubert made sure all seven of his children developed an understanding and appreciation for music. Daubert served as the band director in the Northern Lebanon School District in Fredericksburg, Pennsylvania, for 37 years, taking his marching bands across the nation to perform.

His passion for music made an impression on son Christopher, who began playing the trombone as a third grader.

“My dad was my hero,” said Christopher Daubert, the vice chancellor and dean of the MU College of Agriculture, Food and Natural Resources. “He was the best man in my wedding and my first music teacher. He was such an exceptional influence and talented musician.”

Daubert dabbled with the piano for a little bit but said he was always drawn to the trombone. He and his six siblings would play at church, where Harlan served as the organist. 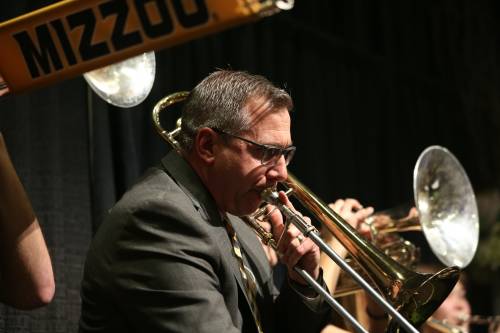 Daubert was a member of the Penn State Blue Band while he was working on his undergraduate degree in agricultural engineering.

“Music was just what we did,” Christopher Daubert said. “It was like the Von Trapp family from The Sound of Music, all of us Dauberts playing together.”

“Once I finished sixth grade, my dad needed a trombone player in the high school band,” Daubert said. “As a seventh grader, I started marching with the high school kids – and that was hard. As the band director’s kid, a lot of the students wondered why I got this opportunity. I had to step up and prove myself.”

Daubert marched in the Macy’s Thanksgiving Day Parade in New York City, the Rose Parade in California and even had a chance to perform in Ireland during his high school career. Daubert, who also lettered in soccer and tennis, was part of state championship marching band teams as well.

“There were two big things in my high school – FFA and the high school band,” Daubert said. “Being in a small town and having a band that was super successful, it was pretty cool.”

Daubert attended Pennsylvania State University (Penn State) after graduation. He made sure to bring his trombone with him.

“On my first day at Penn State, I dropped everything I had brought to college in my dorm room, grabbed my trombone and my dad took me to try out for the Penn State Blue Band,” Daubert said. “I was nervous, but you just fight through it and do it. With my background, I was really prepared for it.”

Daubert’s try out went well and he soon joined the Blue Band. Daubert was part of the Penn State Symphony and was on the field with the marching band for the national championship football game between Penn State and the Miami Hurricanes in 1987.

“I had friends who had been part of it and they had talked about the great experiences they had with the marching band, so I knew it was something that I wanted to be a part of,” Daubert said. “I remember my first pregame show before my first football game. Running onto the field with 80,000 fans in attendance – that was pretty incredible.”

Music has continued to play a role in Daubert’s life. He is a huge fan of patriotic music – making the Fourth of July a favorite holiday. Daubert is also a fan of John Philip Sousa, a legendary composer who was known for his military and patriotic marches.

“I have always enjoyed the marches,” Daubert said. “My dad, his signature song was Stars and Stripes Forever. He would end every concert with that song. My wife and kids are embarrassed by my Fourth of July collection, and I know they’re sick of it, but I love it.”

Daubert played the trombone off and on after graduating from Penn State. He even picked it up recently for the annual Ag Unlimited event.

While Daubert has always enjoyed the music, it has been the friendships, experiences and lessons that he has valued most of all.

“Music opened so many doors, through friendships and travel,” Daubert said. “There is a such a teamwork aspect to music as well. It’s an important message in patience and working together.

“The lessons you learn from music are priceless. You have to put time into it – there generally isn’t an instant return. There’s a lot of time, energy, preparation and commitment to learn the technique. It’s quite the feeling of accomplishment, too, when you master a song. Music has presented me with several situations where I’ve had doubts – but I’ve worked hard to prove myself. You have to play that horn in front of judges and put yourself out there. Those experiences have prepared me well for today. I’m still trying to learn from these experiences as well.”