Jon Cody (left), a graduate student in the Division of… Expand ▸

Teaching and research have been at the forefront of J. Perry Gustafson’s distinguished 40-plus-year career.

It makes perfect sense, then, that the J. Perry Gustafson Award for Outstanding Graduate Research in the Life Sciences would be awarded to a stellar Ph.D. student whose quality research deserves wide recognition.

Jon Cody, a graduate student in the Division of Biological Sciences, earned the honor this year, which was given out during Life Sciences Week at the University of Missouri.

“It’s really hard to put into words how meaningful this award is,” Cody said. “It was totally unexpected and incredibly exciting. It’s definitely an honor. As you’re moving along in your work, you don’t notice the small incremental steps it takes to get to the end. All of the sudden you get there and realize what you did. 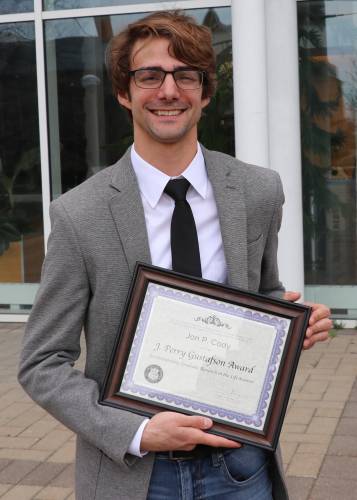 “To be recognized by a community of very strong professional researchers, who are distinguished within their fields, is fantastic.”

This is the first year of the award, which is given to a Ph.D. student conducting life sciences research in the Interdisciplinary Plant Group, College of Veterinary Medicine, Comparative Medicine Program, Division of Biological Sciences or College of Agriculture, Food and Natural Resources. The honor comes with a one-time $2,000 unrestricted award added to their stipend.

“It’s marvelous and humbling to have this award in my name,” Gustafson said. “It’s a phenomenal honor.

“I’m also very impressed with Jon and his research. I’m excited to follow his research and how it translates to the field.”

Cody received his undergraduate degree in biological sciences, with a focus on genetic engineering, from Southern Illinois University Edwardsville. Cody, who grew up in Jacksonville, Ill., came to Mizzou in 2013.

“I chose MU for my graduate work because of the strong agricultural community that’s located here,” Cody said. “You have the Interdisciplinary Plant Group – and you had Jim Birchler. He’s so humble and brilliant, and the atmosphere that he creates for a laboratory benefits every student who comes through there. If you get stuck at a roadblock, he is more than capable of giving you the tools to get over it.”

Birchler is a Curators’ Distinguished Professor of Biological Sciences. Cody has been a part of Birchler’s lab since he became a Tiger.

“Jon insisted on tackling a difficult project when he started graduate school,” Birchler said. “While it is not yet finished, it is clear that he has made all of the pieces work. Jon is very skilled in the lab. He is also very collaborative both within the lab and in terms of helping other labs with their projects.”

Cody’s research focus is on the development of tools for genetic engineering within plants, with the goal of hopefully increasing the efficiency and accessibility of those tools to academic institutions.

“I’m working toward increasing the amount of DNA that we’re able to place into plant, and targeting that into a single location,” Cody said. “If you sequentially target multiple large fragments in a specific location, it can be inherited as a big package. This really broadens the scope of what is possible in transgenics. We live in a time where we have increasing populations and a changing environment. We’re going to need to be able to improve the plants to better suit those future environments and climates to sustain our population.”

Cody has already been an author on several papers, including the first author on a few.

“Jon was chosen since, as a grad student, he has already shown significant productivity with several papers, including some in which he was the first author,” said Gary Stacey, a curators’ distinguished professor of plant sciences and part of the award selection committee. “As you may know, it is not uncommon for students not to have papers until near their graduation. Therefore, the fact that he already has a number of papers speaks to his productivity. The letters of reference were all very complimentary and spoke specifically to the impact of the methods that he was developing. Hence, the committee thought his work was important and impactful. As you can guess, it is never one thing that garners such recognition, but the entire package.”

“I chose MU for my graduate work because of the strong agricultural community that’s located here. You have the Interdisciplinary Plant Group – and you had Jim Birchler. He’s so humble and brilliant, and the atmosphere that he creates for a laboratory benefits every student who comes through there. If you get stuck at a roadblock, he is more than capable of giving you the tools to get over it.”
―Jon Cody

“All applicants were very strong, but the most appealing aspect about Cody’s work is that it will impact the research efforts of the whole field – and will have extremely broad translational impact as we try to feed nine billion people down the road,” added Douglas Randall, professor emeritus of biochemistry and member of the selection committee.

Cody has developed a passion for agriculture, especially plants, during the past few years.

“If you asked me six or seven years ago what I would be doing, this is totally not what I would have told you,” he said. “There is just something that draws me to plants, and I’m not sure what it is.

“It’s weird because it’s not been a single event that sparked my interest in agriculture. My teacher from Jacksonville High School, Jim Herget, introduced me to biological sciences. At SIUE, my professor and mentor, Darron Luesse, introduced me to plant research and genetic engineering. Luesse’s lab was a perfect environment to get exposure to laboratory techniques, which has had a lasting impact on me in my research. Since starting graduate school at MU, there have been several people who have been incredibly encouraging, really shaping my research interests toward agriculture. I can’t thank the Division of Biological Sciences and all my friends and family enough for all the support given to me over the years.”

Cody said he is focused on continuing his research in gene transformation and increasing the accessibility of those findings. He is also hoping to find different techniques that can be used to improve the process of genetic engineering.

“I wake up every morning, come in and do work that matters,” he said. “I can’t think of any other profession I would rather be in. I enjoy coming to work every day.”

Gustafson, an adjunct professor in the Division of Plant Sciences, earned his bachelor’s degree in crop science in 1967 and his master’s degree in agronomy in 1968, both from Colorado State University. He earned his doctorate in genetics in 1972 from the University of California-Davis.

After almost 10 years as a faculty member at the University of Manitoba in Winnipeg, Canada, he was recruited by Ernie Sears to be a part of the wheat genetics program that Sears built at MU, as part of the U.S. Department of Agriculture Agricultural Research Service’s Plant Genetics Research Unit.

“It’s marvelous and humbling to have this award in my name. It’s a phenomenal honor. I’m also very impressed with Jon and his research. I’m excited to follow his research and how it translates to the field.”
―J. Perry Gustafson

While at Mizzou, Gustafson built a strong program focused on wheat cytogenetics – and mentored more than 25 students and more than 50 international scientists. His research focused on understanding genetic mechanisms that control the introduction and expression of genes in wheat, using genetic, cytogenetic and molecular approaches.

Gustafson not only taught those students and scientists, he has helped bring knowledge to numerous countries, including developing countries around the world.

“Working with students has always been a passion,” Gustafson said. “As part of that, you have to challenge them and acknowledge their work. They need the feedback and encouragement. At the same time, you have to make them think. How is their work going to help push agriculture forward?”

Gustafson has published more than 150 peer-reviewed papers, 26 peer-reviewed book chapters and co-edited 14 books. He has received recognition from institutions in Poland, Greece, Portugal and Bangladesh. Gustafson is also an honorary professor at Yangzhou University, China; Banat University, Romania; and the University of Nottingham, United Kingdom.

“I have taught in a lot of places,” Gustafson said. “It has always been a lot of fun, and I’ve always enjoyed my time working with students. Again, having this honor named after me means so much.”