As a graduate student working on his Ph.D. in agronomy at Mississippi State University, Gene Stevens spent the majority of his nights doing schoolwork, as he was also working full-time.

To break up those nighttime study sessions, Stevens would read stories to his son and daughter. While his children enjoyed stories from a book, they really tuned in when Stevens would tell stories about his childhood in rural Tennessee.

Stevens has continued to tell those stories, now to his grandchildren. With the encouragement of his wife and daughter, Stevens has turned those stories into a children’s book. “Cotton Tales” tells the story of Stevens’ youth and serves as a family history of sorts. There are several chapters focusing on Stevens’ grandparents and their struggles during the Great Depression. 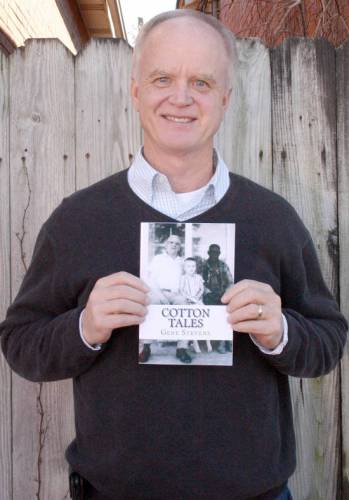 “My kids, like most kids, loved to listen to stories,” Stevens said. “We often read books together, but they really enjoyed when I would tell stories from when I was their age. Those stories were fun for me to tell. It was great to reminisce.”

The desire to write a book became more of a focus in 2012 when Stevens was diagnosed with kidney cancer. Stevens had written several parts of the story already – the diagnosis pushed him to look into finishing and publishing his work.

“I’ve had a couple recurrences since then and writing has really been a good distraction during that time,” Stevens said. “I’ve just felt as though the time to finish it was now.”

Stevens, a University of Missouri Extension professor in the Division of Plant Sciences, who is located at the Fisher Delta Research Center, has always been a writer at heart. He earned his bachelor’s degree with a major in biology and minor in English/journalism from Union University (Tennessee) before getting his master’s degree in plant and soil science from the University of Tennessee.

Stevens joined Fisher Delta in 1994 and has helped farmers increase crop yields and efficiencies of fertilizers and pesticides during that time. As part of his job he has authored nearly 50 peer-reviewed journal articles.

“I’ve found that writing technical papers and a children’s book are actually quite similar,” Stevens said. “It’s really interesting. For both, you’re trying to keep sentences short and avoid using big words. You have to explain complicated material in as simple of a way as possible.”

“Cotton Tales” is made up of 17 chapters, which are broken into three sections – childhood adventures, old times and growing up. The first section focuses on Stevens’ younger days, when he was less than 10 years old. The second section takes a look at Stevens’ grandparents and their experiences. The final section hones in on the youth and young adult years of Stevens’ life.

Stevens’ wife and sister-in-law provided edits for the book. He drew the illustrations within the book.

“My brother has always been the artist in our family, but I found that I am better at drawing than I thought I was,” Stevens said.

Stevens grew up on a dairy farm with 135 Holstein cows. His dad was also a cotton farmer, who grew corn and soybeans as well. Cotton has played a major role in Stevens’ life, including his career.

“The title of the book comes from one of those early experiences,” Stevens said. “I had five boy cousins and a brother and we did a lot of things together, including rabbit hunting and trapping. I remember a time when I was too small to go hunting, but my cousins returned with a couple rabbits. I noticed their white tails and told my dad that they looked like the cotton we grew. My dad said that was why we called rabbits cottontails. The title is a play on words from that experience.”

Stevens self-published the book, after some encouragement from John LaRose, Jr., a reporter/photograher for MidAmerica Farm Publications. The book is available on Amazon and in the Portageville library.

“It’s been a lot of fun,” Stevens said. “I’ve already had people asking me to write a sequel.”