Mid-Missouri was in an ideal location for August's total… Expand ▸

Click here to see video of plant responses at the South Farm Research Center during the 2017 total solar eclipse. Video by Stephanie Sidoti.

When the total solar eclipse swept through Missouri in August of last year, the University of Missouri prepared a number of experiments and projects for the extremely rare occurrence. Mid-Missouri was in an ideal location for the eclipse, as the phenomenon traveled right through the Show-Me State. There was complete darkness at 1:12 p.m. in Columbia and it lasted nearly three minutes.

While the majority of the focus was on the astronomical effects of the eclipse, Tim Reinbott, assistant director of the Missouri Agricultural Experiment Station, wanted to see how the agricultural world would react. Reinbott, along with Bethany Stone, teaching professor of biological sciences, put together their own projects, observing how plants, animals, fish and insects reacted to the eclipse at the MU College of Agriculture, Food and Natural Resources’ South Farm Research Center.

“Tim is always thinking,” Stone said. “All of our projects and observations during the eclipse were born out of him being curious.”

Reinbott’s curiosity came from years of observing plants and animals. When evening hits, both plants and animals react to the change. Reinbott wondered if they would react when it went dark in the middle of the day.

Reinbott and Stone picked four plants to observe – mimosa, clover, soybeans and corn. Mimosa, clover and soybeans all normally close up at night according to past observations.

“Plants are really very sensitive to light,” Stone said. “They use it to determine a lot of the decisions that they make. Some of those responses are circadian responses. Circadian responses are set by the 24-hour clock. Just like we feel sleepy at night, even if we’re in a cave, our bodies know when it’s nighttime.

The goal of the observations was to see if the plants exhibited circadian responses or in-the-moment responses. 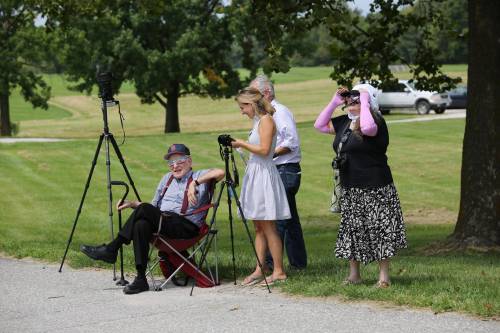 Individuals traveled from across the United States to enjoy the eclipse at the South Farm Research Center. Photo by Logan Jackson.

“The mimosa and soybeans responded to the changes in light during the eclipse,” Stone said. “The clover wasn’t fazed at all. The evening of the eclipse, we watched the same plants at sunset to see how they would react. The clover closed right up light it always does. That would suggest, to me, that the clover is very much controlled by the circadian rhythms. Mimosa and soybeans are more about instant environmental decisions.”

The eclipse offered a setting that can’t be replicated in a laboratory. That’s why Reinbott and Stone wanted to be as prepared as possible for the short-lived darkness.

“When working with photobiology in the lab, everything we do is artificial in terms of light,” Stone said. “When we expose these plants to different light, we can’t be confident that the light is true. Having the opportunity to turn off the lights in the middle of the day, the real lights, it was a great opportunity to see how plants respond.”

Stone, who teaches botany at Mizzou, is using the results from their observations in her classes. Students have already tried to replicate some of the projects that Stone and Reinbott did during the eclipse.

“It’s not the predictable that excites me about science – it’s the unpredictable.”

This isn’t the first time that Reinbott and Stone have worked together. When Stone was a Ph.D. candidate at Mizzou, she worked in the same lab as Reinbott. When her advisor was out of the office, Reinbott served as Stone’s mentor.

Along with plant observations, Reinbott wanted to see if the horses at the MU Equine Training Facility, located at South Farm, would react. South Farm also had chickens on site and kept an eye on the fish in a lake at Jefferson Farm and Garden. While insects weren’t monitored in a research sense, there was a focus on listening to see if they would react in terms of more noise.

“I’ve worked with and been around animals and livestock my entire life,” Reinbott said. “I was just curious if we would see similar behavior that they exhibit in the evenings.

“Going into the eclipse, we didn’t see much activity. The rooster did crow, but the chickens never went to roost. When the eclipse was ending, it was like a whole new morning – like the sun was just coming up. Our horses got a little riled up and the insects got loud. It was really interesting to see.” 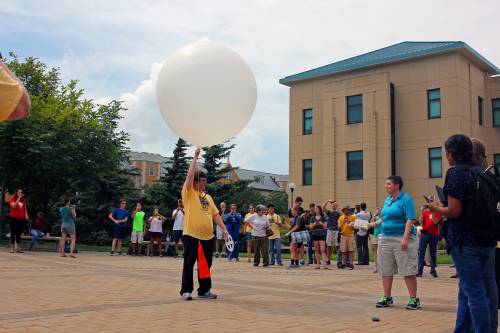 The School of Natural Resources launched a weather balloon on campus during the eclipse. Photo by Jacob Shipley.

Mannie Liscum, professor of biological sciences, also played a role in the eclipse work. One of Liscum’s research areas focuses on light. He had a sophisticated light spectrum meter out and was taking measurements at various times – looking at the entire spectrum of light.

“His hypothesis was that as the eclipse started, and total light concentrations decreased, that across the spectrum of the wavelengths, the numbers would decrease uniformly,” Stone said. “If it’s a 25 percent decrease in total light, then he thought we would see a 25 decrease in blue light, UV light and these wavelengths.

“That’s not what we saw, however. Some wavelengths didn’t change at all until the very end. Some of the wavelengths kind of hung in there. It added another layer to our observations.”

Another total solar eclipse is slated to pass through the southeast corner of Missouri in 2024. Reinbott is already thinking of the possibilities.

“I didn’t realize that we were going to have another one in seven years,” he said. “Now, we can prepare and adjust for the next one. We probably have more questions now than we did before, and this will give us an opportunity to test some of those questions.

“One of the questions I asked myself was how this was going to help plants. It’s a fair question. Sometimes you don’t know. Soybeans, for example, grow from latitude 23 degrees on up. You can’t get soybeans to grow closer to the equator than that. Maybe with these observations and tests we can find something about how plants respond to light that could help push production closer to the equator.”

Below are examples of the projects and observations that CAFNR piloted during the eclipse.

Equipped for the Eclipse: cafnr.missouri.edu/2017/08/equipped-for-the-eclipse/