Logan Howard has always been a fan of stories, especially storytelling.

Growing up, Howard found an exciting and fun way to tell stories – writing and drawing zines. Zines are a form of magazine, generally a self-published work by a fan. Howard learned about zines through several music zines in the mid-1970s.

“I really got into zines in the early 1980s,” he said. “The context that really got me started were the punk and music zines. There were a lot of enthusiastic punk zines at the time. People would pay homage to their favorite bands and music. My friends and I were really into those. 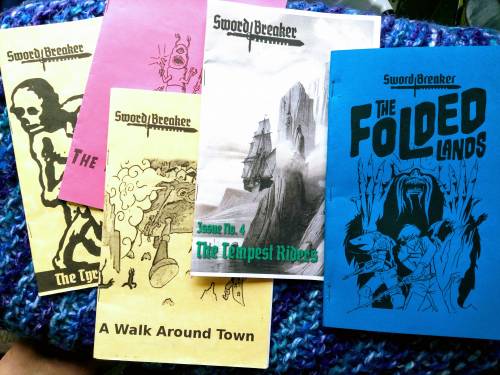 “I had one friend who really enjoyed literary zines, and he and I would write a lot of stories for those. I would draw some of the covers. It was a lot of fun. We were teenagers passing out our own hand-made zines. Those were the classic days, where making zines meant a lot of time at Kinko’s making copies, carefully planning the page layout so when it printed you could fold it and make it look exactly right.”

Howard moved on from zines for a bit, focusing on other hobbies, including theatre, while growing up in Santa Cruz, California. He did a lot of improv during that time, shaping his storytelling abilities. An avid reader, Howard also gained plenty of storytelling insights from the numerous books he read.

The storytelling itch struck Howard again when he was reintroduced to zines while working for the University of Missouri Bookstore, nearly 12 years ago.

“I had really let zines go,” Howard said. “When I started at the bookstore, there was a push to look into zines. The thought was that we could bring them into the store to add some flavor and excitement. We tried it, but it really didn’t take off. But I got excited again about zines. As I started to research them, it reminded me of the zines I worked on as a kid.”

As Howard started to look into current zines, he found an area that could use a few more stories – Dungeon World. Dungeon World is a tabletop, roleplaying game – one that Howard is extremely passionate about.

“I got back into roleplaying games around the same time I was looking into zines,” Howard said. “Growing up, I played Dungeons and Dragons and similar games. As I was getting back into these games, I stumbled across Dungeon World. It’s a homage to Dungeons and Dragons but more focused on narrative and less on moving miniatures around a map and carefully planning out a plan. It’s more in the moment, like a movie.

“Reading the rules, I got super excited. I started tinkering with the game and building stuff for it. I thought it would be cool to make a zine for the game as well. There was only one zine, but it had died out after only a couple issues. There was another but it didn’t fully focus on Dungeon World. I really only found one, Plundergrounds, and it was pretty new.”

Howard soon sat down and put together his first issue of his zine – Sword Breaker.

“Zines are about enthusiasm more than they are about skill or design talent,” Howard said. “Even though I didn’t have the talent that some of these other people had, I knew it didn’t matter. I knew I could make a zine about Dungeon World because I love it.

“I put together my first issue and threw it out there. It actually took off pretty well. There was a podcast that I listened to frequently, and they did a review of it. That was really surreal. I was over the moon.”

Howard has published five zines thus far. He is currently working on his sixth issue. A friend from Howard’s online community has partnered with Howard on the past two zines. The two have worked together on the storytelling and the design.

“I think my storytelling comes from years of reading and my theatre background, especially improv. Knowing how to do improv is really knowing how to tell stories and knowing how to make a story move forward. That’s how I write. I get people into trouble and they have to find a way out of that trouble.”
―Logan Howard

“I decided to make each issue a sort of setting,” Howard said. “The first one I ever wrote was a classic horror, fantasy setting. I have things in the first issue that I’ve tried to continue throughout my other books as well. For example, at least one of the magic items is something pulled off of a monster.”

Howard is part of two online communities where he goes to bounce ideas off of friends.

“There are a couple communities that I visit a lot,” Howard said. “The Gauntlet is the first. Everybody on there is super welcoming and super kind. There are no judgments. The second is Dungeon World Tavern. It’s another generous place where everyone bounces ideas off of each other. We have a great camaraderie – and we’re always looking for more people to join.”

Howard, his wife, Genevieve, and their son, Derek, moved to Missouri in 1998. Howard has spent the past two years as an office support assistant in Bioengineering, part of the Division of Food Systems and Bioengineering in the MU College of Agriculture, Food and Natural Resources. Genevieve is a strategic communications associate in CAFNR and Derek is a current student at Mizzou.

“If you were a commoner like I was, you weren’t going to own land or buy a house in Santa Cruz,” Logan Howard said. “When we had Derek, we were deciding on the environment that we wanted to raise him in. We wanted to own a house and own some land. We really wanted to be in one place for a long time.

“Gen and I moved a ton as kids. We didn’t want that for Derek. We started looking at places online, in articles and in books. We had a whole list of criteria. We ended up with three possible towns. Columbia was the first one we tried. We thought that if we didn’t like it, we always had two other options. We’ve been here ever since.”

Logan and Genevieve have participated in National Novel Writing Month in November during each of the past few years. Those opportunities have given Logan an opportunity to hone his storytelling skills even further.

“I think my storytelling comes from years of reading and my theatre background, especially improv,” Howard said. “Knowing how to do improv is really knowing how to tell stories and knowing how to make a story move forward. That’s how I write. I get people into trouble and they have to find a way out of that trouble.”