The Missouri Show-Me-Select Replacement Heifer Program has enrolled more than 135,000 heifers on more than 850 farms during its 20 years of existence.

The program, developed and spearheaded by David Patterson, a professor of reproductive physiology in the University of Missouri College of Agriculture, Food and Natural Resources (CAFNR), celebrated its 20th anniversary during the Missouri Cattle Industry Convention and Trade Show on Jan. 5. The celebration included presentations by program coordinators, producers, veterinarians and MU administration. Numerous pioneer farms, made up of individuals, families and friends, were recognized during the event as well.

“There have been so many things that have come out of the program that have been beneficial to producers in the state of Missouri,” said Mike Kasten, the founding president of Show-Me-Select Replacement Heifers, Inc. “We sold heifers before the Show-Me-Select Program, and we had a real difficult time getting anybody to actually give value to them. They could go to the auction barn and buy a heifer for $650 – why would they want to pay $800 for them? To explain the difference wasn’t easy. With Show-Me-Select, we started to be able to explain that value and were able to market our heifers much better.” 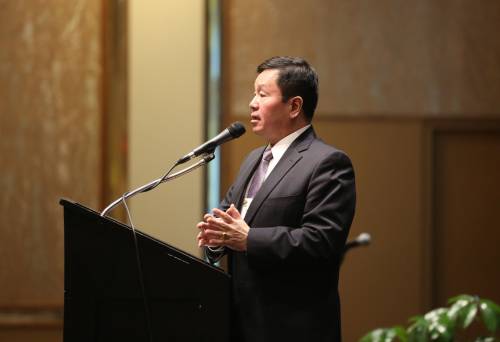 Mun Choi, president of the University of Missouri System, spoke during the 20th anniversary celebration.

Patterson, a state beef Extension specialist at Mizzou as well, helped begin a similar program in Kentucky while as a faculty member at the University of Kentucky. The goal of the program was to improve heifer development. Producers were having problems with heifers retained as replacements, with less than desirable pregnancy rates as yearlings and higher than normal dystocia rates at calving as two-year-olds.

“Heifer development is one of the most expensive aspects of a cow-calf operation,” Patterson said. “The cost of getting to that point and having heifers fall out – and that process happening over a long period of time – led us to put the pieces together and assess where heifers were at going into the breeding season. What adjustments could we make? The idea was to start focusing in a different way on the reproductive development of heifers, as well as the nutritional development.”

When Patterson joined the faculty at MU, the goal was to create a similar program – only have it implemented statewide.

“Mizzou has some huge advantages with the College of the Veterinary Medicine and the way our Extension system is organized,” Patterson said. “We were fortunate at the time because of a competitive in-house grants program through Extension that helped fund the implementation of the Show-Me-Select Program statewide.”

Northeast and southwest Missouri were the pilot regions for the program. The first farm visits occurred in 1996. Eldon Cole and Al Kennett, MU Extension program coordinators, helped bring the program to producers in their respective regions.

“Both Eldon and Al played a key role in the development of the program,” Patterson said. “They took what we gave them and ran with it. The first few years were monsters because we were working with every veterinarian, on each farm, to get everyone calibrated and up and going.”

Producers pay a membership fee to be part of the Missouri Show-Me-Select Replacement Heifer Program. Based on the number of heifers the producers have retained for potential breeding, they have to enroll those heifers if they have any interest selling them.

“The program requires a complete health platform,” Patterson said. “That starts at weaning. From that point forward, the goal is to set heifers up for long-term reproductive health. The next thing on the list is a pre-breeding evaluation on the heifers, and all heifers are required to go through that exam. From February to April, heifers across the state are being evaluated by veterinarians prior to the breeding season. Ninety-one percent of the heifers in the program were synchronized in timed artificial insemination last year, which is the next step. All of the heifers have to go through an early pregnancy check to see whether they’re pregnant and to determine more precisely when they become pregnant. Heifers are checked again 30 days prior to sale to confirm pregnancy status.

“There are a lot of steps – but we generate a lot of data. We use that data to help producers understand how everything is working.” 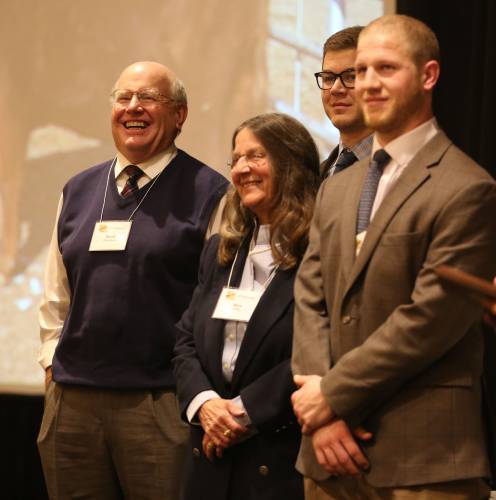 Patterson and his family were honored during the celebration event.

There are numerous Show-Me-Select sales for producers to participate in throughout the year as well. The program has offered 157 sales since its creation, at 11 locations. Nearly 35,000 heifers have been sold, grossing more than $50 million in sales for producers. The sales have provided a huge platform for marketing heifers as well, not only in Missouri but across the United States. Buyers from 20 states have purchased heifers from the program.

“The useful part of the sale is that you can put an economic value on those various levels,” Patterson said. “This program has created a conduit for introducing new technology into the industry, and it’s easy to assess worth of the heifers based on the economics from the sales.”

“CAFNR is a leader in terms of developing DNA predictions in cattle, whether it is dairy or beef,” said Jared Decker, an assistant professor in CAFNR and Extension beef geneticist. “What I realized is that the producers who are choosing to be a part of the Show-Me-Select Program, they are those who are willing to be progressive and adopt new technologies, with a focus on profitability and improved production. So let’s find a way to tie in the DNA testing into this program. That led to a new designation, called Show-Me-Plus heifers. Those are simply heifers that have a DNA test that produce a genetic prediction.”

In its 20 years of existence, producers from 108 of 114 Missouri counties (95 percent) have enrolled heifers in the Show-Me-Select Replacement Heifer Program. The program has produced an estimated $150 million impact on the Missouri economy.

“This program has highlighted the teamwork and partnerships between faculty, producers and veterinarians,” said Mac Wilt, DVM, a veterinarian at the Paris Veterinary Clinic. “Those partnerships are key for the program to work. As a large animal veterinarian, I get to interact with my clients a lot, multiple times per year. I develop a personal relationship with those producers, and that’s extremely rewarding to me. It’s also been great to work with the faculty at the University of Missouri.”

For a closer look at the 20th anniversary celebration of the Show-Me-Select Replacement Heifer Program, visit: flickr.com/photos/cafnr/albums/72157689189834232.