Four students were recognized at the SNR ceremony. Emily Russo earned a degree in parks, recreation and sport. While at the University of Missouri, she was a Mizzou Athletics strategic communications intern and a Residential Life leadership advisor.

Russo completed an internship at NBC Sports Chicago over the past summer. She also earned a second bachelor’s degree in the School of Journalism.

Luke Stancil earned a degree in forestry. He served as an undergraduate teaching assistant for several classes, and was a School of Natural Resources Ambassador for multiple years.

Starting in early January, Stancil will be employed by Independent Stave Company located here in Missouri. 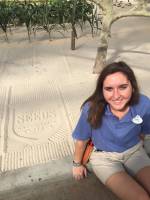 Sara Thuston earned a degree in environmental sciences. While at Mizzou, she completed a semester-long study abroad program in France, and an internship educating visitors at Disney World about greenhouse operations and sustainable agriculture.

She also has designed and implemented an outdoor-based learning plan for elementary school students studying natural resources. Upon graduation she is headed back to Orlando to work for Disney for a few months, followed by graduate studies.

Woodall is past president of the Collegiate Ducks Unlimited Chapter. Starting shortly, he will be employed by the U.S. Fish and Wildlife agency and stationed in Madison, Wisconsin. 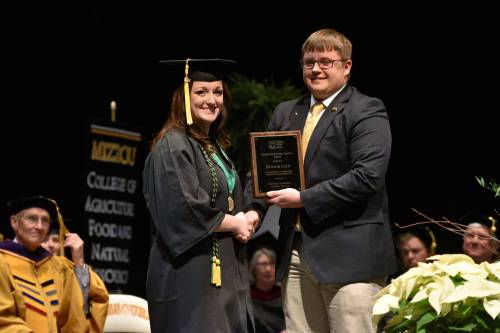 Tori earned a degree in science and agricultural journalism, with minors in agricultural economics and plant sciences, and a multicultural certificate.

At Mizzou, she served as a CAFNR Ambassador, Sigma Alpha President, Griffiths Leadership Society member and with CAFNR True Tigers.

In addition to her student clubs and organizations involvement, she had internships with the U.S. Soybean Export Council, MU Ag Alumni Association, Farm Journal Media and MU Tiger Garden.

One of Tori’s nominators stated she is “confident, compassionate, humble and earns the respect of others.”

Approximately 280 students graduated from CAFNR and SNR this December.