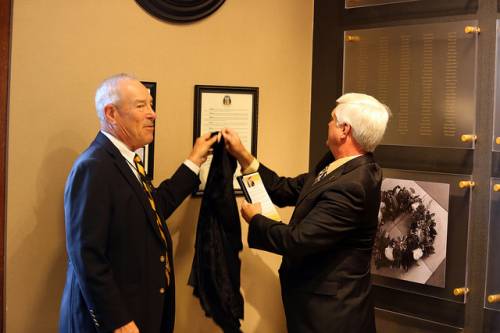 The unveiling, with Bruce Loewenberg and Bryan Garton.

On Sept. 6, friends of Allan Purdy gathered to honor his service to his country in World War II and his service to this university and the State of Missouri. Some attendees knew Allan as a professor in CAFNR, some from the scholarship/financial aid office, and some from church. Others were recipients of CAFNR’s prestigious Allan W. Purdy Award – this coveted award goes to deserving faculty and staff who exemplify Purdy’s care and concern for students. The award is given only on special occasions and not annually.

Bryan Garton, CAFNR’s associate dean for academic programs, and Bruce Loewenberg, BS FF&W ’61, shared much about Purdy’s life and accomplishments with the crowd.

Allan Purdy dedicated his life to removing financial barriers to higher education. He served as director of scholarships and student financial aid for the University of Missouri for 21 years. He was the founding president of the National Association of Student Financial Aid Administrators and helped create the Missouri Higher Education Loan Authority (MOHELA), spending 20 years on its board. He also served as an associate dean in the College of Agriculture from 1949-58.

Purdy grew up on a farm just four miles south of Macon, Missouri. He received a bachelor’s degree in horticulture from the College of Agriculture, Food and Natural Resources in 1938 and a master’s degree the next year.

He served in the Navy as a PT boat captain in the Mediterranean Theater during World War II where his objective was to stop the supply of food and ammunition to the German army. His squadron later served as a diversionary force in Gulf Juan, as an anti-ship screen in the Nice-Cannes area. In April 1945, during its preparation for deployment to the Pacific, the war ended. In 1948, PT-305 was sold to a private company to be used as a tour boat. 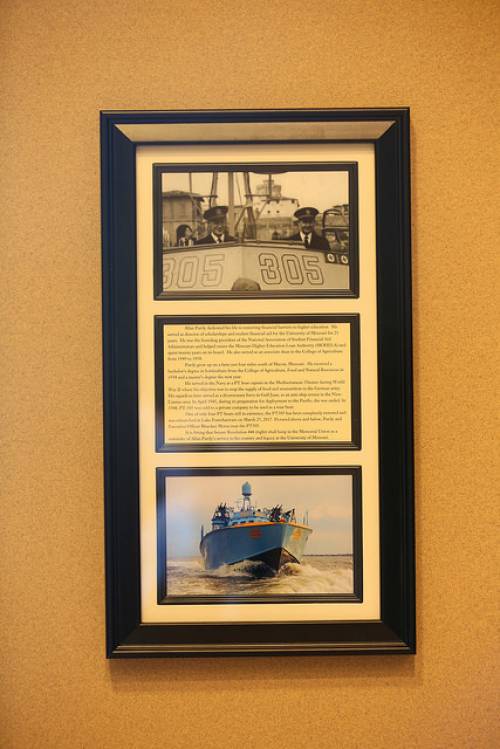 One of only four PT boats still in existence, the PT-305 has been completely restored and was relaunched in Lake Pontchartrain on March 25, 2017. Loewenberg, who became friends with Purdy’s children through the relaunching ceremony, knew he had to help tell Purdy’s story. He worked with legislators to secure a fitting tribute to Purdy, and then with CAFNR staff to find just the right location for this tribute.

The highlight of the event was Garton and Loewenberg unveiling Senate Resolution 466 that hangs in  Memorial Union as a reminder of Allan Purdy’s service to his country and legacy at the University of Missouri.

Purdy died in 2010 at the age of 96. In addition to the Allan W. Purdy Faculty and Staff Award, CAFNR is honored to award the Allan W. and Vivian C. Purdy Scholarship to deserving students annually.

(The Senate Resolution and photos of Purdy as captain of the PT boat hang just behind the information desk on the first floor of Memorial Union North.)