As part of his research, Jeff Wood maintains the Missouri… Expand ▸

Jeff Wood’s background and current research focus allows him to be a part of numerous unique projects. Wood, an assistant research professor in the School of Natural Resources, who joined the University of Missouri in 2016, played a role in two recently published papers – one involving understanding the cycling of nitrogen, the other focusing on better observing photosynthesis.

Wood’s research focuses on the exchanges of mass and energy between the biosphere and atmosphere. His research is directed toward studying canopy photosynthesis and respiration in forest systems and relations with ecosystem water status. 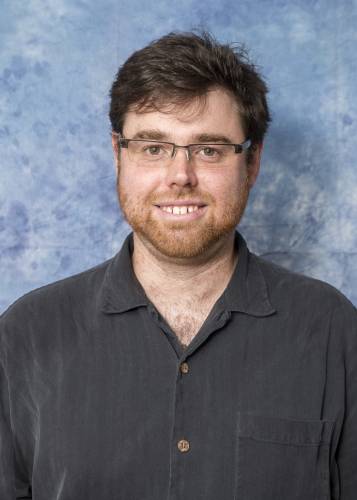 As part of his research, Wood also maintains the Missouri Ozarks AmeriFlux (MOFLUX) tower at the Baskett Wildlife Research and Education Center near Ashland. The project, in collaboration with the Environmental Sciences Division of Oak Ridge National Laboratory, measures the carbon and water balance of Missouri’s oak-history forests on a large scale.

“When I finished my postdoctoral research at the University of Minnesota, the assistant research professor job at Mizzou really appealed to me,” Wood said. “I was also excited about the possibility to work with the MOFLUX tower. It’s been a great experience since I arrived here.”

Wood grew up in Canada and received each of his degrees north of the United States border. He earned a chemistry degree from Mount Allison University, and his master’s of applied science in environmental engineering and a Ph.D. in land resource science from the University of Guelph. He received his Ph.D. in 2013, after which he completed his postdoctoral work in Minnesota.

The University of Guelph, located just southwest of Toronto, is incredibly close to the United States and Canada border.

“As weird as it sounds, I actually moved north to the United States from Canada,” Wood said.

Maintaining the MOFLUX towers is a big part of what Wood does on a day-to-day basis. The tower was established in 2004. The MOFLUX tower gives big-picture information about the functioning of the forest, as Wood describes it. The tower records the health of the forest and how much carbon dioxide is taken up from the atmosphere, how much water is leaving, and energy flows.

The tower gives continuous, automatic measurements meaning the datasets are rather large.

“The tower is the centerpiece of the site,” he said. “When it was established, Oak Ridge wanted a location in a deciduous forest that experienced frequent drought. That’s an interesting situation from an ecosystem science standpoint. We’re right on the transition between the eastern deciduous forest and the Great Plains. From a scientific standpoint, it’s very interesting.” 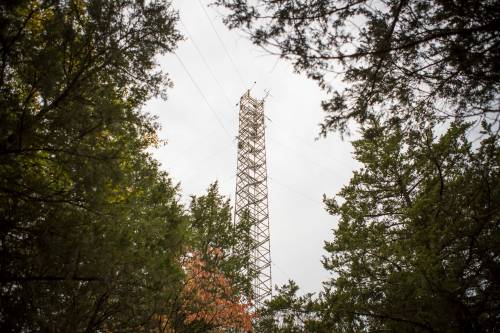 Maintaining the MOFLUX tower is a big part of what Wood does on a day-to-day basis. The tower was established in 2004.

The Baskett Research Center also contains 24 vegetation plots so that Wood can get a smaller-scale understanding of the forest.

“The tower, which gives the big picture, is extremely important,” he said. “But when you start thinking about modeling a forest and really understanding implications on ecosystem processes, you need to have information on a smaller scale. That’s why we have plots to track tree growth and mortality, as well as new tree ingrowth, leaf area and plant litter.

“Because the site is close to campus, it makes it a lot easier to make these manual measurements. We’re measuring from the bottom of the root zone to about two times the canopy height. The tower is the integrator over the ecosystem, and we also make measurements of the different compartments or component processes within the ecosystem.”

The MOFLUX tower is part of a regional network, which includes more than 100 sites that make similar measurements. That data is sent to AmeriFlux and then to the Global FLUXNET. All of the data is available for download online.

The first paper, “OCO-2 advances photosynthesis observation from space via solar-induced chlorophyll fluorescence,” focused on advances in better observing photosynthesis, and involves getting more reliable gross primary production (GPP) estimates at regional to global scales using solar-induced chlorophyll fluorescence (SIF). Measuring GPP at a global scale is challenging. The team that Wood worked with for the paper used SIF, which is a signal emitted directly from the core of the photosynthetic machinery to help address this challenge.

“If you take these flux towers, like the one at Baskett, you can get an estimate of GPP,” Wood said. “If you look at the relationship between what the towers say in terms of GPP and what the satellite is seeing in terms of SIF, previous work was finding a lot of spread between those ecosystems. Our team is looking at whether that spread is smaller than previously thought.

“This is a hot topic in ecosystem science at the moment. SIF is emitted from plants when they are photosynthesizing. It’s exciting to be able to measure this. It’s an optical signal coming directly from the core of photosynthesis instead of dealing with reflectance indices. Being able to look at photosynthesis at these different scales is very important.” 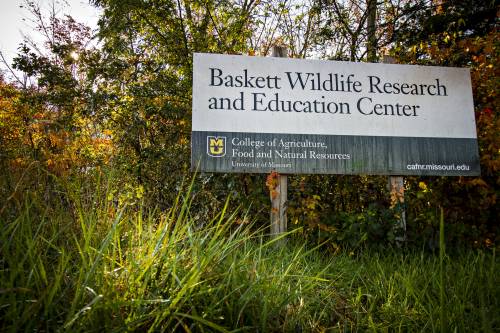 The Baskett Research Center also contains 24 vegetation plots so that Wood can get a smaller scale understanding of the forest.

The group is using the Orbiting Carbon Observatory-2 (OCO-2), whose primary mission target is atmospheric column carbon dioxide observations. The OCO-2 SIF product is a complementary by-product of that mission.

“These new observations of SIF by OCO-2 give new capabilities for investigating variations across the landscape and targeting specific locations,” Wood said. “The paper demonstrated some of the interesting applications. Another interesting finding was that there wasn’t as much variance in the GPP-SIF relationship as we had found previously. It’s not a definitive answer. There are still a lot of uncertainties, but it’s a surprising initial finding.”

The second paper, “Nitrous oxide emissions are enhanced in a warmer and wetter world,” was published in the Proceedings of the National Academy of Sciences. Nitrous oxide is a very powerful greenhouse gas, having global warming potential that is 300 times that of carbon dioxide on a 100-year timescale, and is an important contributor to stratospheric ozone depletion.

“In the big picture sense, we want to better understand the nitrogen cycle,” Wood said. “There are many different forms of nitrogen that are stable in the soil, water or the atmosphere. One of the consequences of intensive agricultural production is that there is a lot of nitrogen-based fertilizer applied to the landscape. We were interested in the United States Corn Belt specifically, because it is one of the most intensively farmed areas in the world.”

Nitrous oxide is a by-product of fertilizer application. The nitrous oxide can be emitted in different ways – “directly” from the field or “indirectly” offsite due to nitrogen being transported away from the field. Because of this, it’s very difficult to track those emissions.

“The purpose of this paper was to improve our understanding of current and future N₂O emissions in the Corn Belt,” Wood said. “The biochemical reaction and transport depends on a lot of environmental conditions. If climate gets warmer and wetter, and the hydrology is flashier, what are the potential implications of the emissions?”

The team for this project used a combination of observations and modeling to address this question. The team found that about 8 to 25 percent of the expected increase in future N₂O emissions will be due to climate feedbacks, and the rest to increased rates of fertilizer application.