When Jeff Wasson was a student at the University of Missouri in the early 1990s, there weren’t a lot of courses that focused on his field of interest – entrepreneurship. He said he was honored to come back recently and share some of his experiences in this line of work with current students in the College of Agriculture, Food and Natural Resources. 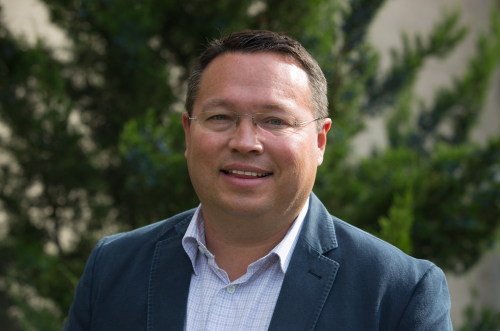 During his visit, Wasson met with classes in leisure studies, hospitality management and agribusiness; participated in an Entrepreneurial Roundtable; and met with student groups.

Wasson is the founder of three successful start-up companies – the first of which, TravelNow.com, when he was still a student in the parks, recreation and tourism program in at Mizzou. Wasson left school as a senior when TravelNow.com found success. He sold that first start-up company to Expedia.com in 2001 and later founded two additional travel-related companies, EZTrip and Gusto.

Between the sale of TravelNow.com and the creation of EZTrip and Gusto, he returned to campus to complete his undergraduate degree in parks, recreation and tourism. Returning to finish his degree was important to him and his family, he said.

“I grew up on the Missouri State campus,” said Wasson. Both of his parents are professors at the university in Springfield. “I have one sister, and at one point, we had a family of four with eight degrees – and I had none of them.

“It was a neat experience for me to be able to come back and see the university function from the other side,” he said. While back on campus, Wasson also helped review curriculum and gave guest lectures.

“I never had any intention of ever getting a job,” he said. “I’ve always had a pull to work for myself. For me, it was a sense of independence; a sense of freedom. Intellectually, it’s stimulating for me – and challenging.”

He initially enrolled at Mizzou as a pre-business major, and soon took an internship at Walt Disney World.

“I was able to really understand the travel and tourism industry at a high level,” Wasson said of that six-month experience.

“Travel was more personal for me,” he said. “I didn’t travel much as a child – by and large it wasn’t part of our life. I want to see every inch of the world that I can. There was a great desire from my standpoint to travel more.” After his internship at Disney World, he spent a summer backpacking through Europe.

“I had a ball,” he said. “That business, the travel industry, for me, it held a lot of appeal. So being able to do what I wanted to do, which was be an entrepreneur, married with what I like to do and wanted to do as a hobby. To marry those two things to me made all the sense in the world.”

When he got back to campus after his internship in Orlando, he immediately changed his major to parks, recreation and tourism. It was in this program that he took his only college course in entrepreneurship – Entrepreneurism in Travel and Tourism. The first day in class, the professor, Steve Lamphear, said he’d sent each student an email and their assignment was to respond to it.

“Of course this is right when the University of Missouri system began to give students email,” Wasson said. “And a lot of students complained that they didn’t know how to do it. But of course from his perspective, that was the point. The assignment was, ‘Figure it out.’”

In the second class, Lamphear lectured on computers and technology and how they were transforming business. 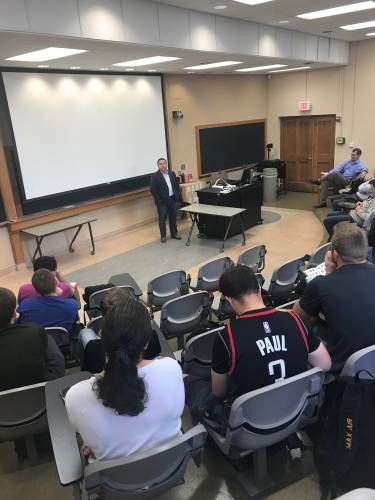 Jeff Wasson speaks to a class as part of his Executive-in-Residence visit in early November 2017. Photo by Maria Kuhns.

“It was a great class and it was the only class – high school or college – that I had that really had any subject matter to do with what I wanted to be in life,” Wasson said. He said is pleased to see colleges focusing on entrepreneurship in the classroom more these days. CAFNR is one of the four colleges at Mizzou that offer a minor in entrepreneurship.

He said he hoped his message during his Executive-in-Residence visit inspires current CAFNR students – no matter their career interests.

“I focus on doing a very specific thing – which is starting, running and funding high tech start-up companies,” Wasson said. “But a lot of the lessons I learned prior to that and because of that are applicable to other aspects of life. Just because you don’t want to be an entrepreneur doesn’t mean that you should fail to understand innovation, the pace of change, problem/solution – those things you can apply in almost any aspect of professional life.

“You need passion,” he said. “You have to be born wanting to do it – you have to have a desire to do it. But you have to learn and get help along the way, as well.”

Even with the passion and desire, it’s not an easy path, even if it was Wasson’s preferred one. Entrepreneurs work nearly 24-hour days, he said.

“You have to be interacting at every level in real time,” he said.

After bringing to life his third successful start-up, and with a growing family, Wasson decided “not, I can’t do this anymore, but rather I can’t do this right now,” he said. So, he took time off to travel with his family and then moved to California. Being closer to Silicon Valley meant less travel for work. He became a partner in the venture capital firm Boost VC in 2015. Being an investor in start-up companies rather than the actual entrepreneur meant at least a slightly slower pace, Wasson said. “I’m not on the front line. The fires belong to the entrepreneurs,” he said.

Wasson and his family are now back in Springfield, Missouri, where he grew up, and although Wasson still has investments and advises other entrepreneurs, he’s no longer making new investments. He’s said he’s not quite sure yet what’s next for him.

“I threaten my two teenage daughters that I might go teach history at their high school,” he said with a laugh. He volunteers with a high school entrepreneurship program in Springfield. He said he’s always enjoyed the educational side of entrepreneurship – including his recent experience here at Mizzou.

“I thought it was a phenomenal honor,” Wasson said about being selected as a CAFNR Executive-in-Residence. “I’ve had a lot of experiences on both sides of that equation [entrepreneurship], as an operator and as an investor. I thought that maybe some of it would be helpful for the students. I was happy to be asked and honored to do it.”