A team of researchers from the University of Missouri College of Agriculture, Food and Natural Resources’ School of Natural Resources and United States Forest Service are continuing an effort to research how climate influences wildfire frequency.

“Development of this model began as a conversation about what is controlling wildfire frequency across the entire United States,” said Stambaugh, an associate research professor in forestry. “Yes, humans can control fire, but the other big driver is climate – and that’s what we were really interested in, particularly in the future. How does climate constrain fire and can we predict it? We started thinking about the physics and chemistry involved in starting a single wildfire and relating that over time. 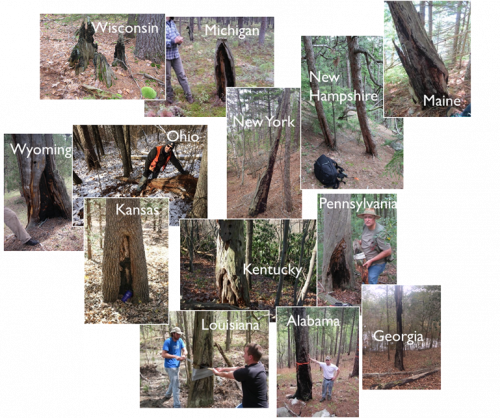 “We really think the model is powerful. The next step was moving away from the places where we have validation data and looking at what the model predicted for all temperature and precipitation combinations. We aren’t necessarily interested in where those climate conditions are, but, rather, what does the model say about how frequent wildfires are expected to be in that setting?”

The model has been continually refined during the past several years, in part through fieldwork, such as gathering fire-scar data from old trees. Fire scars are used as a measure of when and how frequently fires occurred over long time periods. That work has resulted in a journal article, published in PLOS One, detailing wildfire responses to temperature and precipitation. While wildfires can’t be fully prevented, the model can be used to understand climate’s influence on wildfire probability and where and why it changes across different regions.

“We developed this model using concepts and equations used to predict chemical reaction rates,” Stambaugh said. “We reformulated them for wildfires occurring in forest landscapes. We started to think of ways in which the model could be used to explore the chemistry of wildfires since fire is fundamentally a chemical reaction. For example, in the laboratory, you might want to know how quickly a chemical reaction occurs under specific conditions. In forests, the question is similar; you want to know how often wildfires occur in a particular climate. To develop the model, we needed long-term data on how often fires happen in many different places. As we collected more of these data, it was obvious that our model worked really well. We have consulted with many of our colleagues in other parts of the world, and they have been in general agreement.” 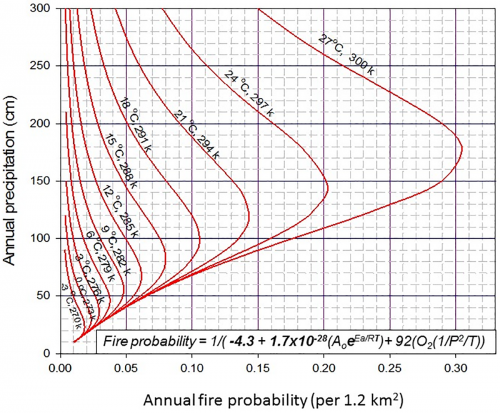 The team has traveled the U.S. and the world to get a first-hand look at wildfires in different climate conditions. That travel has resulted in important information about how the climate and environment of an area can constrain or enhance wildfire occurrence.

“You can see patterns in global wildfire frequency that are obviously predictable,” Stambaugh said. “For example, Greenland doesn’t burn. It’s too icy and wet. It’s on one end of the spectrum. The other end of the spectrum is a place like the Sahara Desert, which doesn’t burn either. It’s too dry and there’s not enough fuel. Between those two extremes, we were confident that there was a way to describe the transition.”

The travel also resulted in new data for the team to analyze and ideas for improvement. Long records of wildfires are key to improving the model. The team continually generates new data from their research on historical fires, along with similar data developed from colleagues, to train and validate their model.

“Some of the first data used to develop the model were from previous studies that described fire history of a single place,” Stambaugh said. “Many of those places are very climatically diverse. For example, we have data from wet and warm places like Louisiana, wet and cold places like Washington, dry and warm places like Australia. We wanted to include data from a broad range of climate conditions. This has allowed us to capture the extremes, show people where different places fit along a gradient of wildfire frequency, as well as the accuracy of our predictions versus what actually happened in the past.”

As the team started plugging temperature and precipitation data into their model, they were encouraged that their model predictions were incredibly similar to actual wildfire patterns.

“We’ve constantly been surprised with the accuracy of the model, particularly considering that it’s not a super complex model,” Stambaugh said. “It’s not a model feeding a model that feeds another model. It’s one model with two variables – temperature and precipitation. The model comes from chemistry and it’s neatly packaged.”

Stambaugh added that model results provide new information about how wildfire frequency changes and where climate conditions could push wildfire frequency in the future. There are few tools with this capability. At a national level, this could be key for many applications such as fire management, wildfire risk and preparedness, guiding wildfire policies, predicting future smoke emissions, etc.

“In the United States, we have put out wildfires so well since the early 1900s that we have few examples of the natural range of variability,” Stambaugh said. “By stamping out fires in the past century, we have lost examples of how climate can influence wildfires. Today, there is little expression of that. Many places burned much more frequently in the past. The historical data and this model really shows us how wildfires varied by climate conditions.

“We see a lot of evidence of past fires on trees through the scars. As a country, if we would have known how frequent fires occurred in the past and how they varied across regions, then we may have chose to do things differently in the past century in terms of forest management, especially in regions that are very prone to frequent or high-severity wildfires.”

Stambaugh said the team was already working on wildfire-climate projects for the United States Geological Survey. They were working on producing model estimates and maps of wildfire frequency for future climate scenarios.

“I think our research team has been uniquely creative and quantitative,” Stambaugh said. “It’s been one of our strengths that is exemplified through the development of this wildfire and climate model. I truly believe the model has significantly advanced our understanding of wildfires and is a major contribution to natural resources science.”

Funding for the project came from the United States Forest Service, as well as the U.S. Joint Fire Science Program.