In Norah Fletchall’s opinion, Truman the Tiger is the “greatest mascot in the world.“

And that’s not just because she’s a proud alumnae of the University of Missouri – it’s also because she has worked in large cat conservation for many years, as part of her career as, first, a zookeeper at the St. Louis Zoo, and now as President and CEO of the Buffalo Zoo in New York.

Norah, who grew up mostly in Kansas City and St. Louis — where she attended junior high and high school — graduated from MU with a degree in animal sciences in 1984. She had planned to go to graduate school at Texas A&M, but when that plan fell through, she answered an ad in the St. Louis Post-Dispatch for a zookeeper.

She always knew she wanted to work with animals — Norah grew up riding horses and thought she wanted to be a veterinarian when she came to Mizzou. But she hadn’t really considered working at a zoo before – it wasn’t something that was part of the curriculum at the time in animal sciences (which now offers a Captive Wild Animal Management minor, in collaboration with the School of Natural Resources).

“So I got the job, working in the antelope house,” she says of answering the newspaper ad. “It was right up my alley, working with the larger animals. I fell in love within a couple of weeks.”

She quickly found out that working with exotic animals was very similar to what she’d already learned in CAFNR – just applied in a different way.

“I got a really well-rounded education,” she says. “I took a lot of production ag classes and I took a lot of ag econ classes – the practical application of that type of knowledge was helpful. I can still fondly remember things I learned in reproductive physiology that I still apply to this day. And I still have my nutrition textbook!” 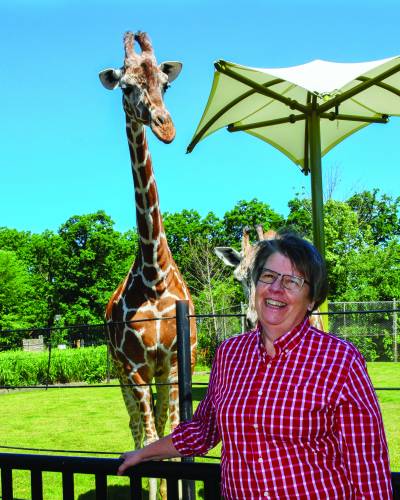 Caring for any animal is a “very strong combination of art and science,” Norah says.

“You take principles on how to provide them with what they need to survive – but you have to be creative,” she says. “Zoos are wonderful places of continuous improvement. So the way we manage animals in a zoo-based setting has changed dramatically over the past 25 years and continues to improve. Of course the animal’s welfare is the most important part.”

And not just this particular animal’s welfare in the zoo, but the welfare of all animals. Zoos exist for one reason only, Norah says – conservation.

“We connect the dots for people – the animals in the zoo are ambassadors for their counterparts in the wild. Increasingly it’s the only contact people have with wildlife – in fact, some people no longer even have pets at home. We do more and more conservation work.” Norah in particular has worked to save endangered tigers in the wild.

Telling the animals’ stories are a big part of connecting the dots for zoo visitors, Norah says.

“Tigers are a great example,” she says. “They are solitary – people always wonder why there is only one in an enclosure.”

Some of Norah’s most memorable moments in her career include witnessing the birth of an animal for the first time. The baby was a gerenuk (a long-necked antelope) and her mother would not care for her.

“We did everything we could to hand-raise her,” Norah says.

To this day, Norah keeps a picture of a gerenuk on her desk.

“I lean towards things that have hooves and horns,” she says. These days, when she takes a walk during her work day at the zoo, she still finds herself gravitating toward “hoofstock,” which includes antelope, gazelle and zebras.

That’s just one of the perks of having a zoo as her workplace, Norah says. Although her days now as President and CEO are spent mainly on budgeting, fundraising, managing relationships with supporters and leading her team of senior staff, she says she still enjoys just getting up and looking at an animal or display if she needs or wants to.

“It’s really a fun job,” she says. “Every day is a new experience.

“Although sometimes I do miss those days when I could just go clean the barn and leave at the end of the day!” she says.

Norah has now been the President and CEO of the Buffalo Zoo for about five months – she took the reins at the end of May. She arrived in her current position after serving as COO, and, before that, vice president of conservation, at the Indianapolis Zoo. Prior to that, she was the deputy director at the John Ball Zoo in Grand Rapids, Mich.

“That’s where I really started,” she says of her 22 years in Michigan. “It started so small – only 12 full-time employees. We grew the zoo substantially. I took on more responsibilities as it grew over the years – started overseeing more and more.” Norah went back to get her master’s degree in business from Grand Valley State University during that time, too.

One exhibit in particular is a source of great pride in her career.

“We designed a huge aquarium in Grand Rapids,” she says. “We had to learn it all from the ground up. There was a huge satisfaction the day of the ribbon cutting.”

Another satisfaction is seeing coworkers she hired as zookeepers go on to run their own zoos.

“I’m super passionate about recruiting and training the next generation of zoo professionals,” she says. “I had so many good mentors in my career. I want to help others who are super passionate.”

When she is able to visit with the “next generation,” Norah says she always advises students to “take all of the classes that you don’t think you’re going to need, because you’re going to need them!” This includes speech, business, and more, she says. And those students who think they’re never going to write another paper, or do another geometry problem again after leaving school – not in this field!

“Another thing that is critically important is the ability to communicate verbally and in writing,” she says. “You will be writing reports every day in this field. I get resumes and cover letters and if there’s one misspelling, it goes in the trash. Basic math skills are so important, too. Understanding how to figure out the volume of an aquarium. Reading a set of blueprints. All of those kinds of skill sets are really important.”

The “softer skills” are also vital when a zookeeper goes from only caring for animals to supervising others.

“What sets you apart from others is your ability to work with other people as it relates to animals,” she says. “Animal care professionals are so passionate about what they do that they’re sometimes challenged to come together in a team-based environment to achieve great things. Your priority is the animals, but you can’t do that in a vacuum. In order to move up, the skill sets that you will need to learn are related to how to apply your knowledge in a creative way, and influence others.”

Her time as a Tiger

Norah said she never really thought about going to any other school but Mizzou – she always knew she’d end up a Tiger. Not too far from home; a “fantastic,” affordable education.

She says she still enjoys coming back to campus – she has two nieces who also attended Mizzou and she enjoyed watching them graduate – and seeing all the same campus and Columbia spots she frequented as a student. In particular, she fondly remembers The Shack and The Heidelberg.

“I have very fond memories of the great experience I had at Mizzou,” she says. “I would do those four years over again!

“I still tear up when I hear the fight song.”

And if any fellow CAFNR alumni find themselves near Buffalo, N.Y., Norah says the zoo – the third oldest in the nation – is a must-see. The Buffalo Zoo is part of a park system designed by Frederick Law Olmstead, considered America’s first and greatest landscape architect. The Buffalo park system is listed in the National Register of Historic Places, and consists of six major parks, their connecting parkways and circles, and several smaller spaces.

She is truly working her dream job, Norah says – she always wanted to lead a medium-sized zoo.