This summer, the University of Missouri’s College of Agriculture, Food and Natural Resources welcomed high school students from across the state for the college’s five summer academy programs. Each program offered a specialized interest of study and allowed students to discover the major and career options CAFNR offers. Additionally, CAFNR is able to recruit the students who attend. Programs ranged from two to five days and attendees stayed on the university campus. This year, the academies offered were Animal Sciences Youth Leadership Academy, Life Sciences Quest, Mizzou Teach Ag Academy, Mizzou Trap Academy and the Natural Resources Careers Academy. 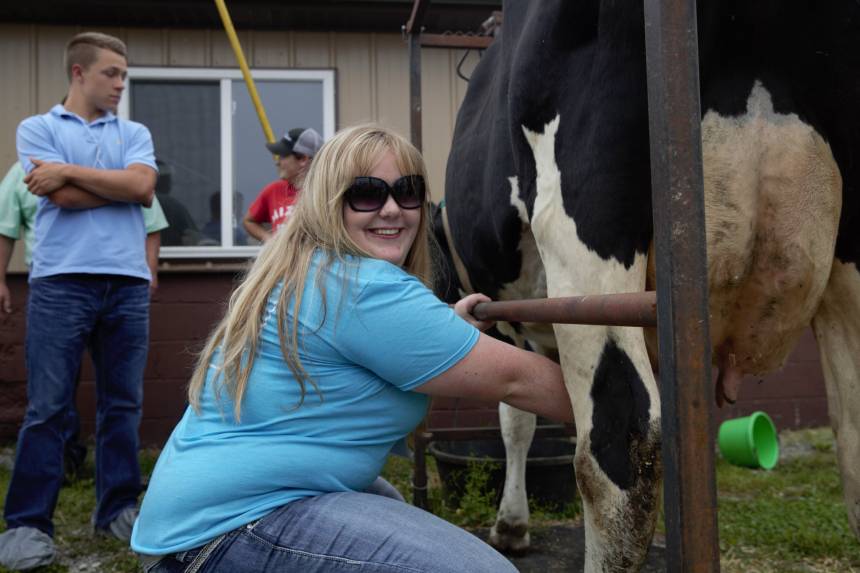 “Summer academies are a vital part of our college’s mission and goals,” said Bryan Garton, associate dean and director of academic programs. “These events allow talented students to experience our campus and faculty first-hand and gives them an opportunity to explore the variety of degree programs CAFNR offers and the rewarding careers that follow.”

From May 31 to June 3, the Division of Animal Sciences, MU Extension and Friends of the MU Animal Sciences Youth Leadership Academy hosted the intensive event aimed at investing in and facilitating the growth of young leaders in agriculture and the livestock industry. Twenty high school students were selected to participate based on educational and community involvement. 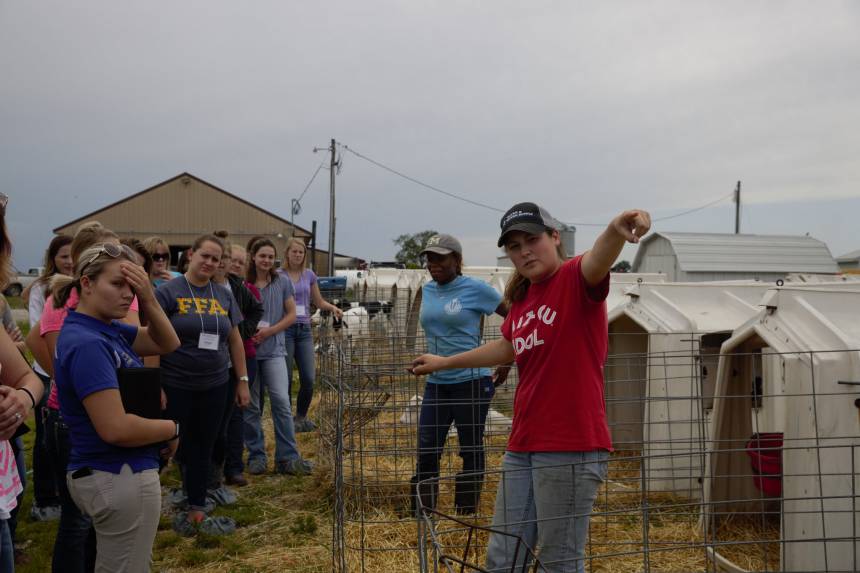 While at Foremost Dairy Research Center, students visited the calves and discussed the different life stages of cattle.

In the post-program evaluation one student commented, “This academy was beneficial in developing leadership and communication skills and knowledge of the animal sciences industry by giving us hands-on experience and teaching us interesting things.”

A parent of one of the students said, “The academy broadened my daughter’s expectations about what animal sciences has to offer her. Our young adults need to know how they can help make a difference in their future and those around them.”

The Life Sciences Quest was hosted from July 16-20 in partnership with the Missouri Department of Agriculture. Activities included working in a biochemistry lab, touring the swine farm, studying genetics and visiting St. Louis for industry tours. 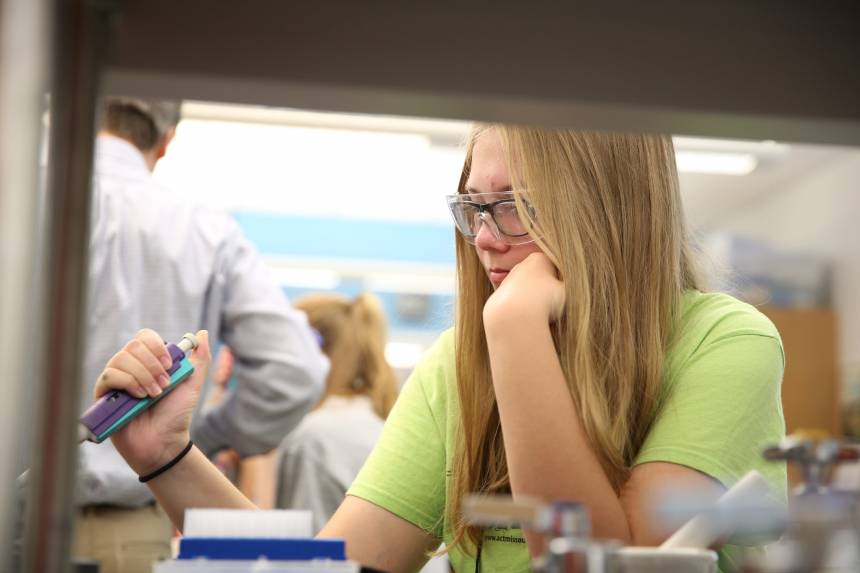 Molly Shumard, a high school senior, originally heard about the program while visiting the university and speaking with the program’s coordinator, Julie Scroggs, coordinator of student recruitment.

Shumard said that the itinerary of the camp was full of unforgettable experiences, most notably, eating a monkey treat at the St. Louis Zoo and touring the college’s swine farm to learn about the phases of a pig’s life. Beyond the activities, Shumard said the faculty was vital to her positive experience at CAFNR.

“Their friendliness made for such a welcoming atmosphere, and they always took the time to talk to us personally,” Shumard said. “Having the opportunity to stay on campus and see the facilities and labs made me more excited to attend college there.” 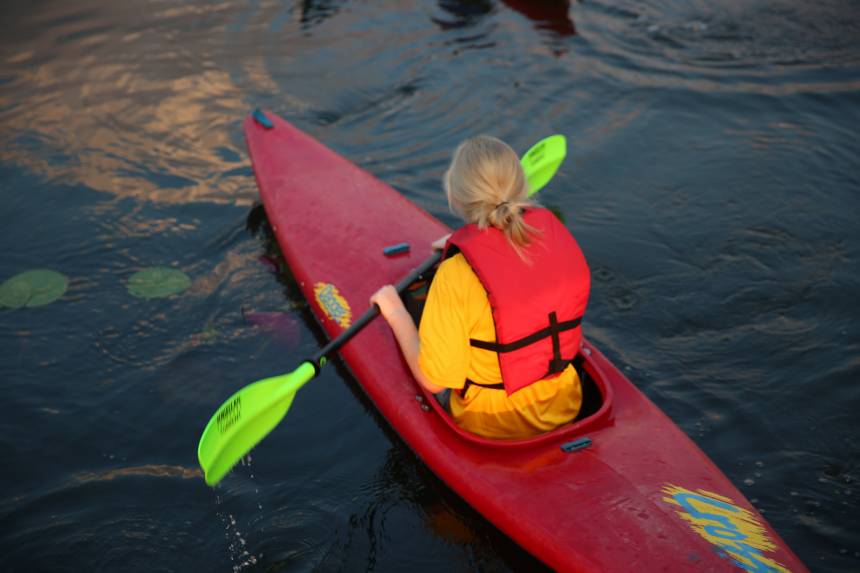 At Jefferson Farm and Garden, students enjoyed a campfire — complete with s’mores, fishing, kayaking and a tour of the native butterfly garden.

Shumard’s father also saw the benefit in his daughter’s attending.

“We do not live in an agricultural setting and she was considering pursing a biochemistry degree at CAFNR. I don’t think she saw the connection between biochemistry and agriculture,” Phillip Shumard said. “The academy gave her an entirely new perspective on agriculture in general, especially how it relates to STEM subjects.”

Mary Delay, a freshman majoring in animal sciences, attended the Life Sciences Quest in 2016 prior to enrolling at MU. In addition to helping Delay solidify her future career path in veterinary medicine, she said she also enjoyed an evening of learning about MU’s rich history and traditions from Garton.

For Abby Schmidt, a freshman majoring in plant sciences, the academy provided an opportunity to test out a few different fields. Ultimately, she decided to switch her major from animal sciences to plant sciences. 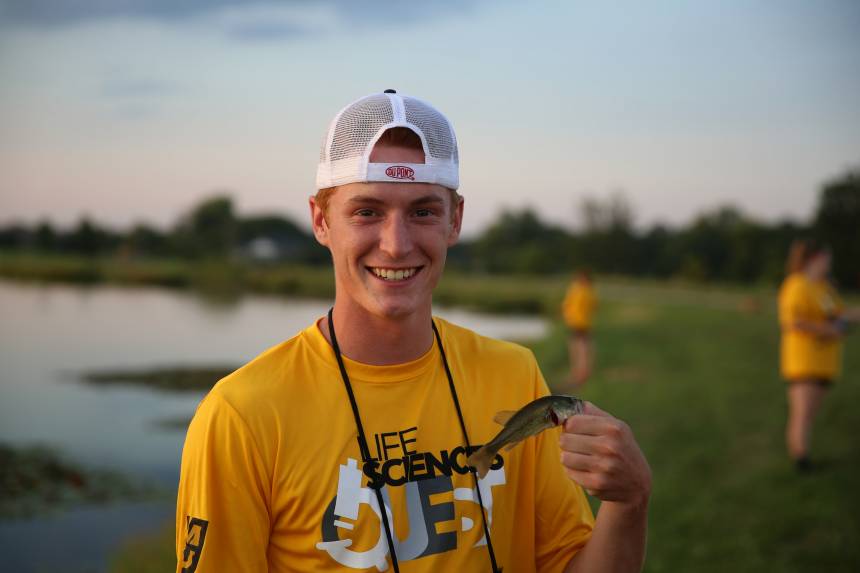 The pond at Jefferson Farm and Garden was well stocked with fish and anglers could bet on a “guaranteed catch.”

Regarding future attendees, Schmidt said interested students should not hesitate in applying.

“Just go for it. Try something new,” she said. “You have nothing to lose, but a lot to gain.” 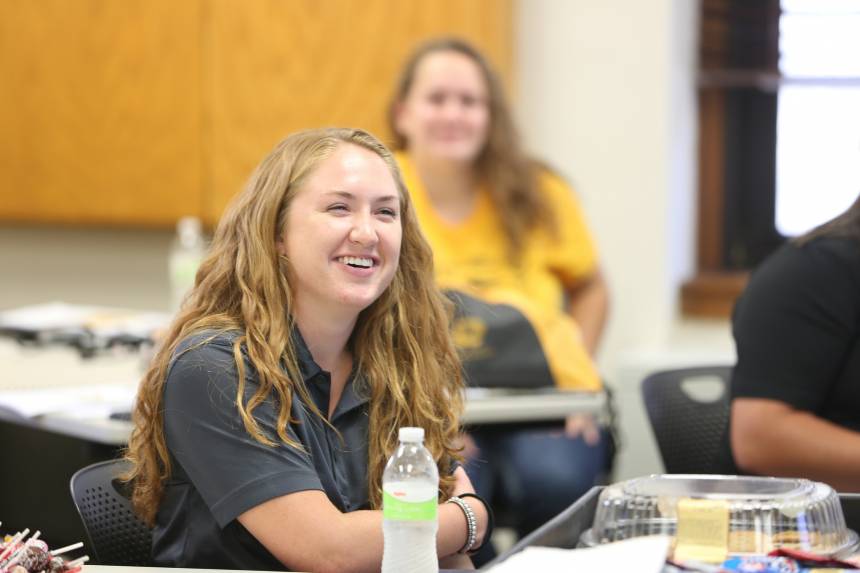 Joshua Bondy, an agricultural educator in Paris, Missouri, and MU alum, sees the benefit of programs like these.

“The Teach Ag Academy has the potential to change the current ag teacher shortage in Missouri. We as current ag educators have to be thinking five, 10, 15 years into the future when we retire and start recruiting and training those future professionals now,” Bondy said.

Bondy said he had the perfect fit for the academy.

“I knew that Mizzou had been offering the Teach Ag Academy for a couple of years, but never had the right kid to encourage to send to it. Andrea was definitely that right kid,” Bondy said.

She said that the academy helped her realize that MU is not as large and intimidating as she originally believed. Unterbrink also appreciated the lessons that she learned. 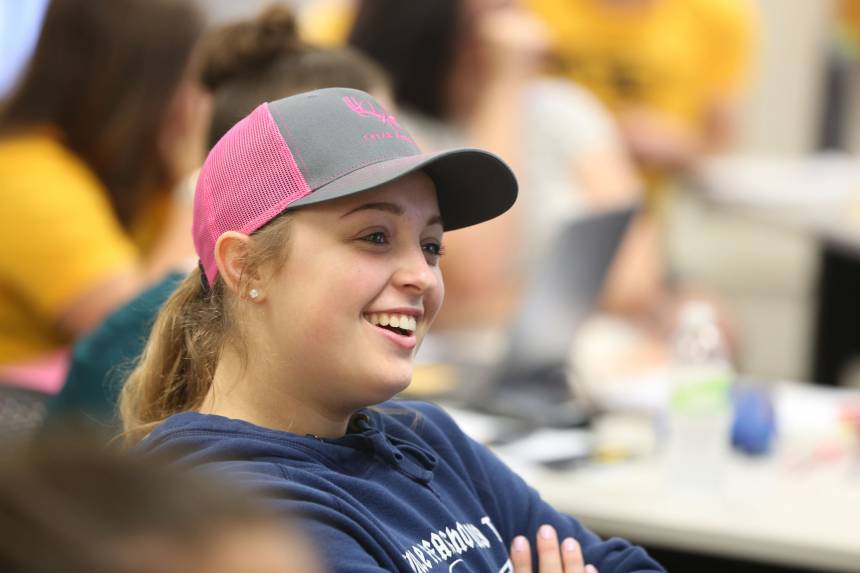 “My favorite part was being able to feel what it is like to be a college student,” she said. “I also got to see what it feels like to be an ag teacher, when on our last day of the academy we taught our own lesson to the rest of the students and teachers.”

Upon returning home, Bondy said he was pleased to hear Unterbrink excitedly sharing her experiences with her peers.

“You don’t want to miss out on opportunities that may change your life,” Unterbrink said. 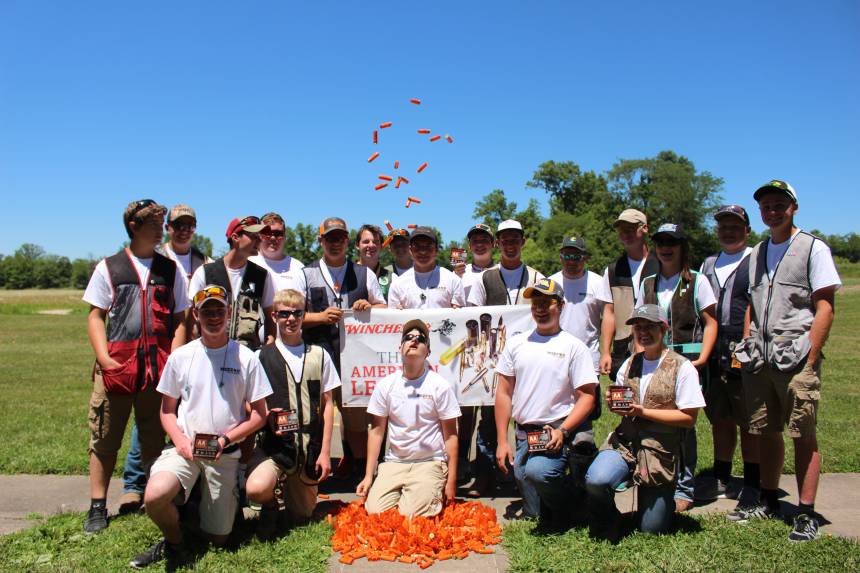 The three-day event took place at Prairie Grove Shotgun Sports with students staying at the University of Missouri campus.

Peyton Hein, a senior, heard about the academy from his father who saw a post on the academy’s Facebook page.

“I thought it would be a great opportunity to meet new people and also become a better shooter,” Hein said. “I wanted to learn how to break more targets and take what I had learned back to my shooting teams.” 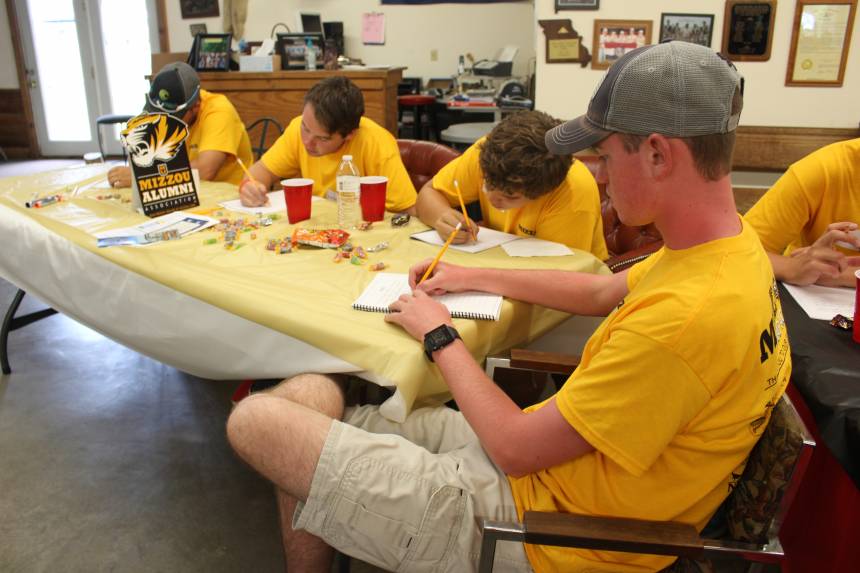 Students learned from industry professionals the mental and physical skills and techniques needed to improve performance.

“I was very impressed with the entire academy. It is a great opportunity not only to experience the campus life at Mizzou, but also a great learning tool to advance techniques used every time you shoulder your shotgun,” Tim Hein said.

Peyton said he is already realizing the benefits of the academy.

“The most important thing that I learned at the academy was how to become a better shooter in all aspects,” he said. “I have been able to increase my target breaks due to the help of great instructors at the academy.” 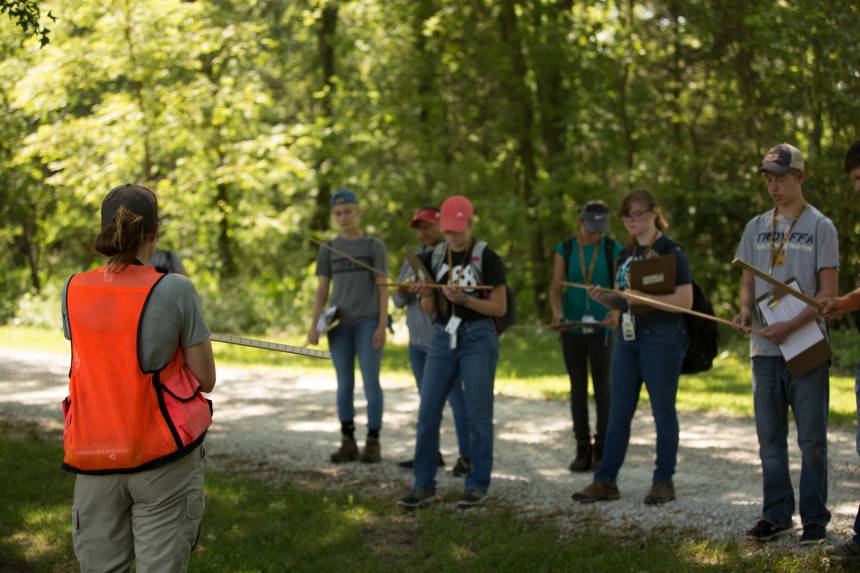 High school student Josh Meyer discovered the academy while browsing the CAFNR website. He said that he did not regret his decision to apply.

“I already had a good view on Mizzou and CAFNR, but I would say this camp definitely reinforced it with the people in the program and how kind and helping they were,” Meyer said.

He most enjoyed the prairie restoration at Prairie Fork and the group’s excursion to the raptor rehabilitation center, he said. Above fun group outings, Meyer said the camp helped him solidify his field of study and future career interest. 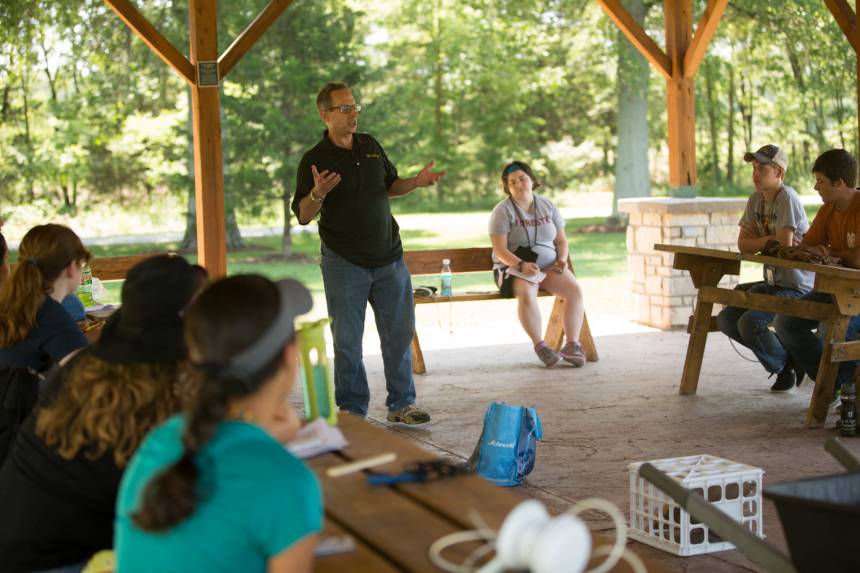 The group heard from guest speakers including Tony Lupo, professor of atmospheric science at MU.

“One of the most impactful things I learned was that we need change. We need change in all aspects of our life and world to conserve our resources and environment,” Meyer said. “It was an awesome experience that I wish everyone could do.”

More information on CAFNR summer academies can be found at cafnr.missouri.edu/summer-academies/ or by contacting each program’s respective coordinator.