Attendees of the annual Wurdack Research Center field day were able to learn about everything from ticks to timber to wildlife damage management on Friday, Oct. 6.

The field day featured several presentations, as well as an opportunity to meet Christopher Daubert, Vice Chancellor and Dean of the University of Missouri College of Agriculture, Food and Natural Resources. Daubert began his duties on Aug. 1.

“Dean Daubert’s presence is critical down here,” said Dusty Walter, superintendent of the Wurdack Research Center. “As he meets community members and advisory board members, he’ll meet the people who are going to be his strongest advocates. Being able to match a face with a name is key. Him being here was great.”

The field day was split into two tours – one which featured fescue, ticks and shortleaf pine research. 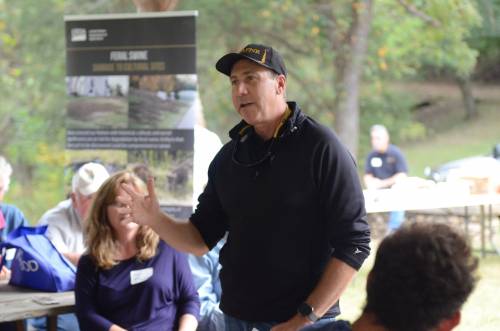 “Fescue drives our cattle industry right now,” Walter said. “We’ve got endophyte in the fescue that is impacting animal performance. There are two approaches right now – manage that fescue in ways to mitigate the negative impact of the endophyte or use the different selections of novel fescue which don’t have the “bad” endophyte. We wanted to talk about both of those.”

The second tour featured presentations on wildlife damage management, a discussion on the challenges and opportunities for agriculture and rural Missouri, and a sawmill demonstration.

“We’re not trying to shift away from forage and timber and cattle,” Walter said. “We just want broaden our horizon, and include presentations that could possibly be of interest to those who don’t own land or livestock. We want to bring newness to our audience. We also want to have a creative approach.”

Roger Branson, a sawmill owner and operator, talked attendees through a demonstration where a portable sawmill cut through a log.

“We’re always looking for new presentation ideas and one of our advisory board members suggested the sawmill,” Walter said. “It’s great to be able to introduce him, since he is a community member here who does custom work. If someone here has trees they’d like turned into boards, they’ll have his information now and can make a further connection.”

Kelly Smith, with Missouri Farm Bureau, discussed the various challenges and opportunities for agriculture in Missouri. David Calandro, a wildlife specialist with the USDA, talked about several pests, including armadillos, black vultures and starlings.

“Not everyone has the same pests,” Walter said. “David’s talk brought an increased awareness, though, which is critical.”

Daubert addressed the crowd during the free lunch, which was sponsored by First Community National Bank.