Sitting on his desk in the basement of the Agriculture Building is a small sample of Logan Jackson’s collection. Next to his computer, a pile of cards. Lining the ledge, an assortment of St. Louis Cardinals bobble heads from his brother who works in ticket sales. And on the shelf, a Funko Pop! character, also named Logan, from Marvel’s X-Men series. At home, the collection continues with game-used warm-ups signed by the six-foot-eight retired Lakers guard Devean George, an extensive Graham Zusi (Sporting Kansas City soccer star) collection and an autograph from four-time World Cup forward, Landon Donovan.

Jackson, agricultural research center news strategist with the CAFNR Office of Marketing and Communications, picked up the hobby at a young age while watching his dad collect baseball and basketball cards and tagging along to card shows in Kansas City. 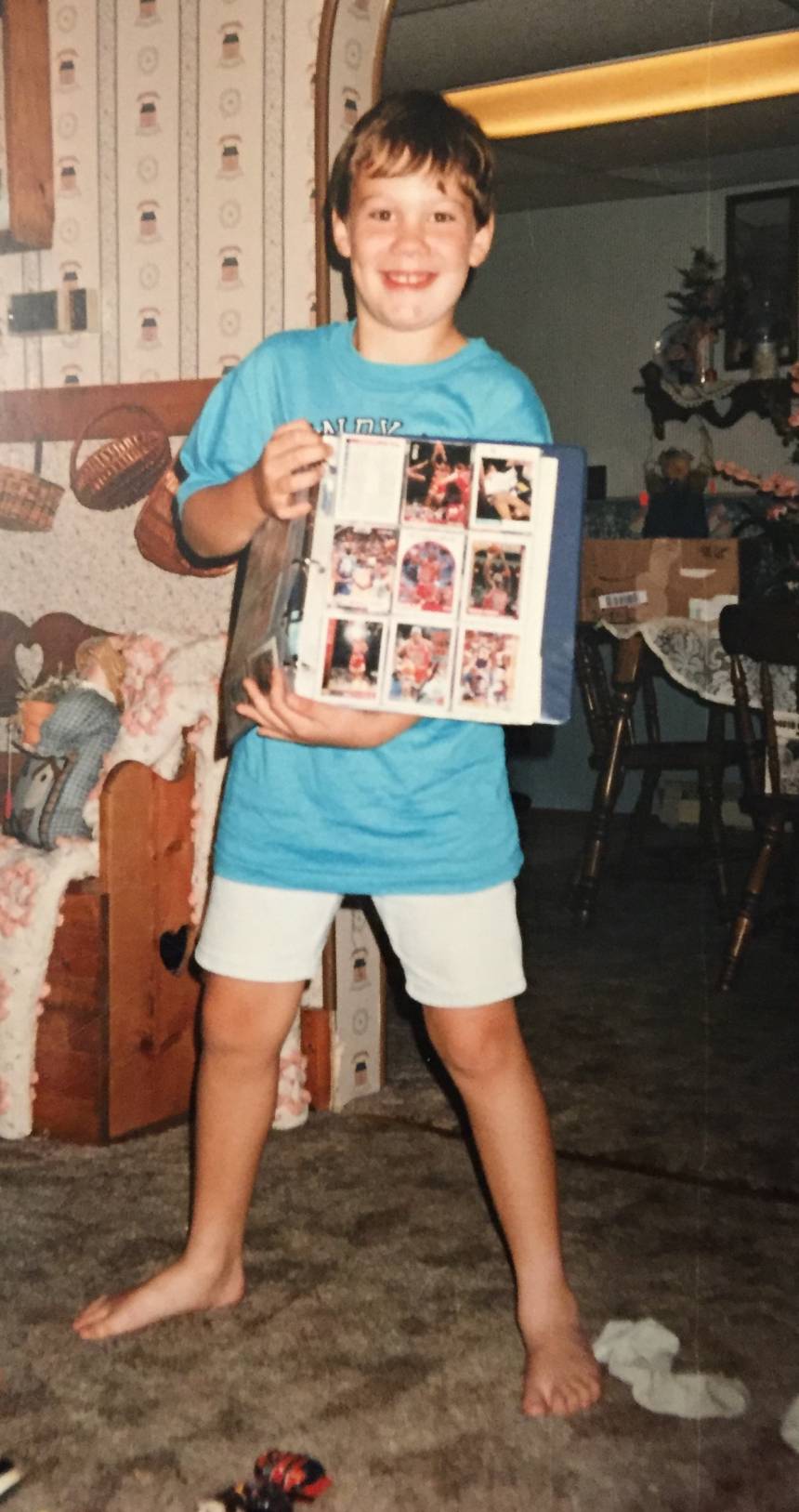 Jackson’s father Les would set up scavenger hunts for Logan and his younger brother, Tyler, to follow. After working through reading and discerning the first clue, they would move from room to room until the final destination where Les would be waiting with a pair of cards for the boys. As their collections grew, they would make trades, consulting price guides, adding each card’s value and running it by their mother, who made sure every trade was fair.

In 2000, when he was 12 years old, Jackson started to learn the business side of trading. When his father had the chance to buy a collection of over 100,000 cards, his mother’s only stipulation was the creation of an eBay account so they could start to sell some of the items. Jackson practiced photographing the card, listing it online and preparing and shipping the items. He still follows this process, buying and selling in his spare time. During the summer between his junior and senior year of college at Truman State University, he accepted an unpaid internship with a newspaper in southeast Missouri. He paid for his expenses solely through buying and selling cards.

“It’s such an international thing now. I’ve bought and sold and traded with guys in Germany and China,” Jackson said. “The industry has changed and grown over the years. That’s probably the most fascinating thing in my mind.”

It was around the time of learning eBay that he started to grow his personal collection, specifically with Devean George memorabilia. He knew he wanted to follow his father’s footsteps and support the Los Angeles Lakers, but he also knew he couldn’t afford to keep up with collecting Kobe Bryant or Michael Jordan. When the Lakers drafted George in the first round in 1999, Jackson said he knew that was his man. He collected George’s cards and memorabilia throughout his career, even covering his walls with posters.

Jackson said his collection is slightly milder these days.

“I’ve tamed it down a little bit,” he said. “We’ve got the office right now and that’s the room I’m allowed to decorate.”

Following college, Jackson and his wife Meagan moved to St. Joseph, Missouri, where Jackson worked at the Atchison Globe, a newspaper in Atchison, Kansas. Only 40 minutes away from the newly rebranded Sporting Kansas City stadium, Meagan, a former soccer player and avid fan, brought Logan along to watch a game. He fell in love with the sport and quickly became involved in collecting the cards that go along with it. He now has several cards signed by SKC midfielder, Graham Zusi. 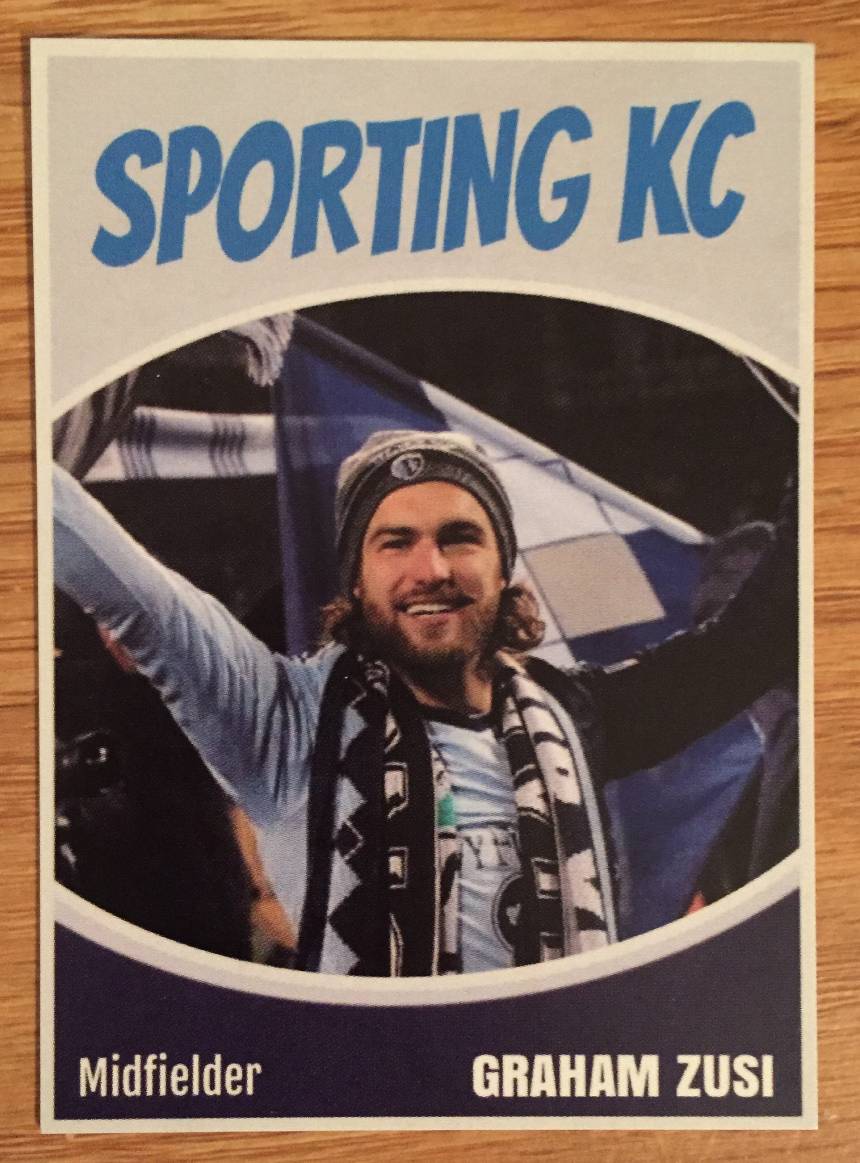 An example of one of Jackson’s custom-made cards.

“There’s also the fun of the chase when it comes to collecting. I check eBay all the time for new Graham Zusi cards,” Jackson said.

Meagan also got him interested in his newer collection of Funko Pops!

“The first one I ever got, I actually didn’t know what the heck they were called,” Jackson said.

She bought him his first one, which sat on his desk at the Atchison Globe until he saw on eBay that the value had appreciated very quickly.

Another new collectible for Jackson is customized cards made with the app Rookies. Using the app, he adds photographs and inserts statistics about athletes, celebrities or family members. Recently, Jackson attended a Harlem Globetrotters game with custom-made cards in hand. They went over well, with one player asking to hold on to the keepsake. He and his wife also announced their pregnancy to their parents with custom cards.

“There’s just something about cards that was always cool.” Jackson said. “It’s how I learned to read and write and do math and critically think.”

A sample of Jackson’s soccer card collection can be found at https://www.flickr.com/photos/148823359@N08/albums.