The Columbia community was treated to a day of educational and fun activities this past weekend, showcasing the wide variety of research and projects being conducted at the University of Missouri College of Agriculture, Food and Natural Resources.

The 11th annual South Farm Showcase, held on Saturday, Sept. 30, featured a little bit of everything, including animals, plants, forestry and turf.

“Our college is extremely diverse and the South Farm Showcase reflects that diversity,” said Tim Reinbott, assistant director of the Agricultural Research Centers.

The Showcase was packed throughout the day, as more than 15,000 people attended the event. Two new features highlighted the day – the Taste of Mizzou tent and a Passport for children.

Attendees could taste everything from mealworms to maple syrup to honey at the Taste of Mizzou tent. Wine and grape juice, Asian carp, roasted peppers, and roasted soybeans were also featured. There were seven flavors of milk and seven flavors of ice cream to try as well. 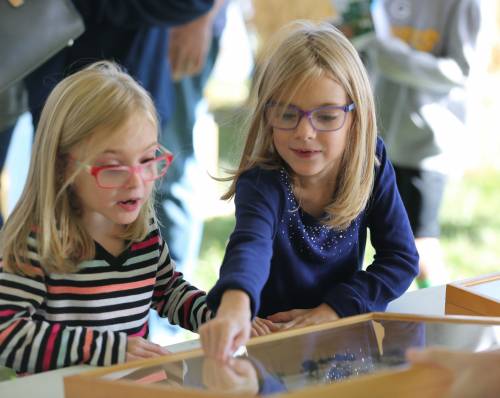 Insects were a big draw for kids during the South Farm Showcase. There was even an opportunity to eat mealworms.

“When you mention food you get everyone’s attention – and at CAFNR, food is our middle name,” Reinbott said. “What was neat is that we had common foods, such as milk and ice cream, with a lot of variety. We also had other food that was rather unique, such as the mealworms and Asian carp.”

The Passport system was also new this year and was for children under 16 years old. The Passport included 12 different stops, which spanned the entire Showcase, from the South Farm Research Center, to the MU Equine Teaching Facility, to Jefferson Farm and Garden. If children completed 10 of the 12 tasks, such as flying a kite, milking a cow, eating a mealworm or walking through the soil tunnel, they received a free pumpkin.

“We added the Passport because we noticed that many kids just stayed with the animals and didn’t get to experience the entire showcase,” Reinbott said. “We chose booths and tasks that allowed them to see the entirety of the Showcase – things that they may not often experience.”

Alisha’s Pink Pumpkin Painting Party was also set up at the Showcase. For a suggested $10 donation, individuals could paint a pink pumpkin, with the proceeds going to the MU Ellis Fischel Cancer Center to fund mammograms for women who cannot afford them.

“I am very proud that we partner with such a worthwhile cause,” Reinbott said. “This is a great example of a collaboration between two very different colleges within MU that provides something that helps so many.” 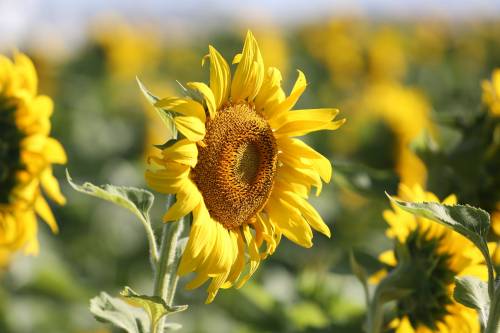 This year’s South Farm Showcase featured a sunflower maze, a first for the event.

There was a face painting station, a corn maze, an opportunity to take photos in front of the sunflower garden, and several farm animals to pet. Soccer, golf and kite flying could all be done at turf management. Attendees could also fish, smash a pumpkin and visit the butterfly house at Jefferson Farm and Garden.

“We also had our first-ever sunflower maze which was a lot of fun,” Reinbott said. “Timing of planting had to be perfect in order to have the patch in full bloom for the Showcase. Don Schindler, farm manager at South Farm, picked the perfect day.”

The first South Farm Showcase was held in September 2006, with less than 1,000 people in attendance. The event has continued to grow over the years, with the goal of connecting the local community with agriculture and CAFNR as a whole.

“We had some families come for the first time, whereas others have never missed,” Reinbott said. “The Showcase continues to change and offers visitors something new each year.”