What exactly does an Advisory Council do? If we look at the dictionary definition: “offering suggestions about the best course of action to someone”; “recommend”, or, “inform (someone) about a fact or situation, typically in a formal or official way”. The School of Natural Resources Advisory Council has done all of that and more. As the Advisory Council nears celebrating its 60th anniversary, a history lesson is needed to appreciate where it came from and look ahead to where it’s going.

The Advisory Council* had its origin in 1951 as the forestry subcommittee of the College of Agriculture Advisory Council. Upon recommendation of the subcommittee, an independent forestry advisory council was established in 1958. Representing various fields of forestry related to business and land management, a broad-based citizen group of 59 members was formed to counsel the school in its teaching, research and extension programs and to acquaint individuals, organizations and legislators with the needs of the School. Ex-officio members represented public agencies; the director of the School functioned as Secretary. 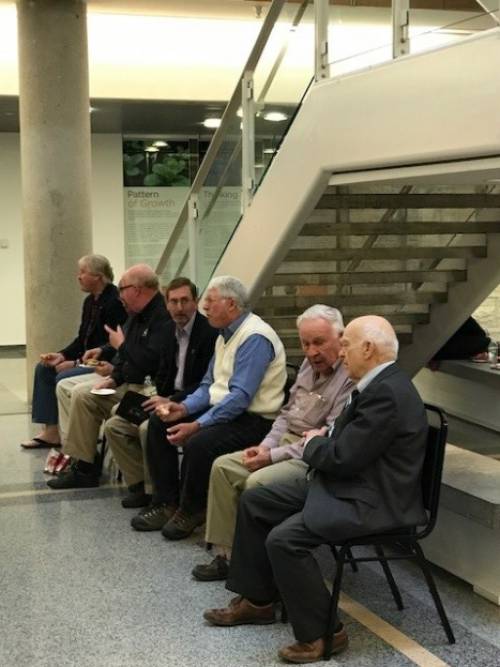 SNR Advisory Council members during the lunch break at the Research Day event held in May 2017.

Under the constitution and bylaws, officers were elected and members selected affiliation with one of five working groups: arboriculture, land management, manufacturing, recreation and sales. A development committee was added in 1963 to encourage financial support of the School. At first, each working group held an annual spring meeting, and the entire council met in the autumn. Later, working group meetings were replaced by a meeting of the executive committee, consisting of officers and the chair of each working group.

This arrangement worked satisfactorily. The council met annually, frequently beginning the meeting with a field trip at a location concerned with natural resources. This was followed by an indoor meeting with a luncheon and featured speaker. Meetings usually were scheduled so that members could attend a football game the following day. Membership since 1970 has varied between 75 and 85 as knowledgeable persons were found and became interested and as others completed a term of service.

In 1971, after reviewing the objectives and organization, the executive committee concluded that an arrangement other than working groups could better reflect the primary mission of the School. Accordingly, the working groups were replaced by standing committees: extension and continuing education, international programs, research and graduate education, undergraduate education and development. Several years later, the international programs committee was included under extension and continuing education. Standing committees meet at least once each year, ordinarily as part of the annual council meeting.

After the School of Forestry, Fisheries and Wildlife was formed in 1973, members with interests in fisheries and wildlife were added to the council.

Meetings continue with the same general format: a field trip followed by a formal meeting. Frequently, faculty members reported on significant research achievements, trips to meetings or proposed curriculum changes, and the director made an annual report. Discussion in the standing committees often resulted in recommendations to the director. Featured speakers at the luncheons included University administrators, legislators, state officials and prominent conservation leaders.

A legacy of assistance

It is difficult to assess the contributions and accomplishments of the council. First and possibly the most significant is the countless hours of deliberation, thought and advice offered by council members, in addition to the time sacrificed from job or business, travel expense and gifts to the school. Indeed, the school is without doubt better because of their understanding and friendship. 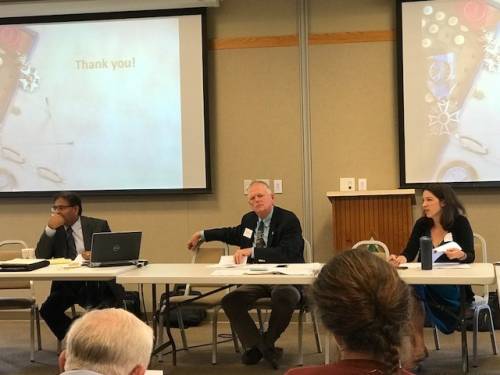 The council assisted at critical times in security passage of the McIntire-Stennis Act (1962), under which federal funds support research and graduate education at forestry schools in the United States, by influencing key members of Congress as to the need and benefits of the legislation.

In curriculum development, the council assisted with several major revisions, including the present ones: forest management, recreational forestry, forest science and specialization, wood products and fisheries and wildlife. In particular, we have relied on their advice concerning the wood products curriculum.

They have helped guide the direction of the school following six periodic program reviews by the Society of American Foresters and the Cooperative State Research Service, USDA. At least one council member has served as a member of a review team.

In continuing education, they have been instrumental in suggesting program topics and speakers for short courses that have covered almost every major area related to natural resources.

During the past 25 years, about a million dollars have been received by the School. Gifts have come from students, alumni, faculty, business firms, foundations, clubs and associations and friends. Some gifts are specifically restricted to certain uses, others are for general purposes. The sustained drive and innovative effort in promoting giving has been provided by the development committee, and gifts of council members have been generous. They have often funded worth-while activities for which no other source was available. The School is indeed indebted to the Council. 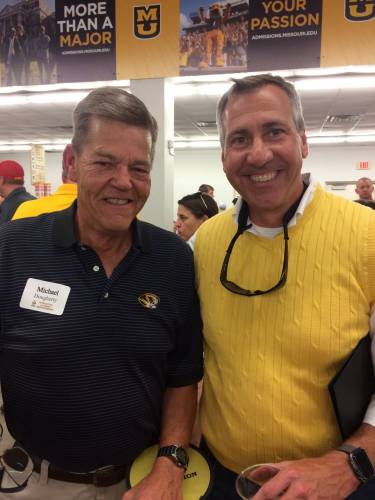 Current Executive Board member Dan Lang remembers: “I can tell you that in the past, and now, there continues to be very involved and influential natural resource individuals on the Council. These have included Andy Runge and Leo Drey, along with current and past Directors of both the Department of Natural Resources and Department of Conservation to name but a few.”

Previous field trips have taken the group to sites around Columbia and around the State of Missouri. One year the Council toured both the Busch Conservation Area in St. Charles County (for a fisheries demonstration) and the Forest Keeling Nursery outside Elsberry (for a forestry demonstration). The purpose of these trips has always been to showcase best current practices in natural resources for a variety of disciplines.

Lang also went on to say that “The influence of the Advisory Council on the School and its programs continues to be both small and large, as is needed. I can tell you that in my experience the Advisory Council has tried to assist the School in whatever way we could to further its mission. I believe I speak for the majority of members when I say that it truly has been a pleasure to serve.”

There have been agenda items such as “SNR Extension Programming” with Bob Pierce talking about some of the innovative wildlife planning demonstrations plots and then touring them at Bradford Farm. Council members have also liked to reach out to undergraduate and graduate students inviting them to participate on panels to talk about internship experiences, research, and field studies. Other trips/tours have been taken as part of the Council meetings to Jefferson City Parks & Recreation, Baskett Wildlife Research and Education Center to discuss the Ameriflux Tower and show fire demonstration plots. And finally this year’s spring meeting was part of the SNR Research Day with Council members participating in the morning speaker sessions and the student poster sessions, with a formal meeting in the afternoon. The Council has also been fortunate enough to use the conference room at the Missouri Department of Conservation’s Central Regional Office which is a mid-way point for many members. 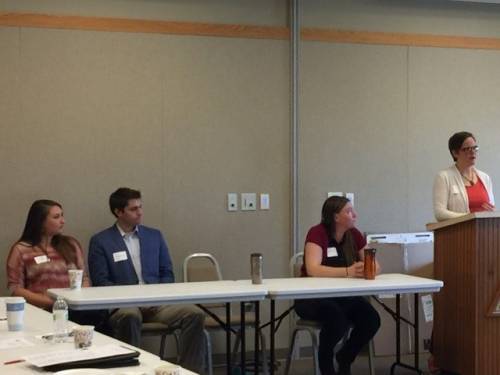 Current President of the Council, Bill Lockwood, remembers a tour that he hosted in Jefferson City: “We planned the program to highlight and tour the various cooperative working relationships we had developed between Jefferson City Parks, Recreation and Forestry with the Missouri Department of Conservation, Missouri State Parks, Missouri Community Forestry Council, University Extension, Missouri State Parks Foundation and the Missouri Park and Recreation Association. All these entities have representatives who are members of the Advisory Council, giving us a forum to unite and strengthen SNR as a whole.”

He goes on to assess what he sees as the advantage to a Council like this: “I think, that to me, the Advisory Council has been an excellent avenue to get to know and appreciate both the diversities and commonalities within SNR. Although the membership all works in the broader field of natural resources, we each represent distinct disciplines, agencies, organizations or businesses. Aside from the Advisory Council, many of us have little opportunity to get to know or work with one another in our everyday jobs. Under the new Strategic Plan, as we focus more on unifying Natural Resources, it is vital that we come to understand how much more we have in common than we have differences. The Advisory Council has also opened doors to get to meet and know faculty and staff of SNR, which would not normally happen, and to appreciate SNR’s role within CAFNR and the University as well as understand the challenges SNR faces for the future. The Council has been a valuable ally of SNR for many years but perhaps there has never been a more critical need for Advisory Council feedback and support than now. I commend current members continuing participation as well encourage new members to join and add their energy and enthusiasm to make Mizzou SNR the best yet.”

An eye to the future

As the School looks forward with a new Director, Shibu Jose, and a new CAFNR Vice Chancellor and Dean, Christopher Daubert, the Council will continue to serve in its role as “advisor” but also realizes it can begin its 60th year actively working with students, faculty, and administration to continue to grow the School — as it celebrates its legacy while continuing to bring in new members to face new challenges and growth for the School, for the College, and for the University.

*Taken from “History of the School of Forestry, Fisheries and Wildlife,” by Richard Smith with sections by Leigh Fredrickson, Ralph Musbach and John Slusher. Special Report 367. College of Agriculture, University of Missouri-Columbia. December 1988. (Provided by Joe Dillard.)