For 13 years, the Bradford Research Center has provided the Columbia community an opportunity to taste a huge variety of tomatoes and peppers, as well as a chance to learn which of those varieties could work in their own home gardens.

This year’s event was no different, as more than 1,000 attendees tried about 150 tomatoes and about 75 peppers. The Tomato Festival, which took place on Thursday, Sept. 7, also featured local restaurants, vegetable and fruit sales, activities for children, milk tastings and tours of the Research Center.

“This year’s turnout was absolutely fantastic,” said Superintendent Andrew Biggs. “Once things got started, there was a steady crowd of tomato and pepper aficionados right up until the end of the festival.”

The tomato varieties included everything from heirlooms, hybrids, cherries to ground cherries. The pepper tastings featured some of the hottest peppers in the world. Attendees scored each variety on a scale of one to five. A score of one is a tomato or pepper that they really enjoyed. A score of five is for a tomato or pepper they didn’t like. The Center will gather the results and post them at a later date. 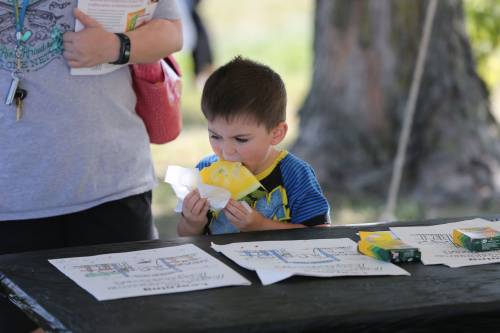 There were several activities for kids during the 13th annual Tomato Festival at the Bradford Research Center.

The tomato tastings were so popular that the majority of the selections were completely gone by the end of the event.

“Usually we’ve got some leftover tomatoes by the end of the Tomato Festival, but this year’s crowd tasted just about everything that we had available,” Biggs said.

The milk tasting, with varieties provided by Shatto Milk, was popular with kids and adults alike. There was also a coloring area for kids, as well as a corn maze to walk through. The local restaurants, which included Jose Jalapenos and Broadway Brewery, among others, were housed in the John Poehlmann Educational Center.

There were three wagon tours through the Bradford Research Center, both of which were packed.

“We had only really planned on providing two tours, but people were loaded up on the wagons waiting for a third, so we gave the people what they wanted,” Biggs said.

For a closer look at the University of Missouri College of Agriculture, Food and Natural Resources’ Bradford Research Center Tomato Festival, visit: flickr.com/photos/cafnr/albums/72157686054080760.