Since he started promoting eating Asian carp as a way to reduce the environmental impact to Midwestern waterways from these invasive fish about four years ago, Mark Morgan has received many calls and emails from folks with suggestions of their own on reducing the population.

One call caught his attention a few years back, and just this fall, all the pieces have come together to finally put it into action.

It was an older fisherman from Florida, Morgan said, who suggested salting and drying the fish and sending the smoked product to developing countries for humanitarian aid.

“I waited, percolating the idea for a couple of years,” said Morgan, associate professor in the School of Natural Resources. “Carp as humanitarian relief is an overlooked possibility. It’s about collaborating people and resources and existing knowledge.”

The collaborations start with student Meghan Wheeler. Wheeler, a senior in fisheries and wildlife sciences, took a class with Morgan her sophomore year, and, when she found out she’d been selected as a McNair Scholar last spring, asked Morgan to be her mentor. Morgan immediately thought of the smoked carp idea and Wheeler agreed to make that her McNair project. Soon, Morgan also learned the project would be funded by an SNR mini-grant.

“There’s a distance between natural resources agencies and the public,” she said. “They feel like the government will force them to do something they don’t want to do on their own land. But you can only do so much with public land – you have to work with the landowners, too.” Wheeler grew up on a farm in the Ozarks, where her family took advantage of meetings and programs with public agencies – she has seen the good these partnerships can do first-hand. 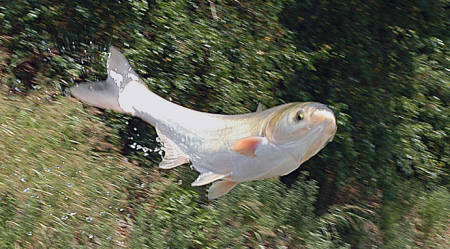 Asian carp are known to leap out of the air when startled.

The other pieces for the carp project have also all come into place – including collaborations across the College of Agriculture, Food and Natural Resources.

Rick Disselhorst, manager of the Mizzou Meat Lab, is supervising the smoking and salting process. Andrew Clarke, associate professor of food science, advised on the different preservatives to try – and will check for microbial activity in the product after about three months to make certain it is shelf stable.

“We have people here who are experts in these things,” Morgan said. “I feel really good about the project.”

Clarke has been involved with the development of carp products since 2007. He has supervised three master’s students who’ve taken on carp projects over the years.

“It was natural to welcome this opportunity to work on preserved products suitable for people needing protein for their diet,” Clarke said. “We’ve moved forward from earlier efforts that simply used carp to feed zoo animals to developing products that people can enjoy.”

Selecting Haiti as the recipient of the aid was an easy choice, Morgan said. Haiti is one of the poorest countries in the northern hemisphere, with nearly half of its population undernourished. Haitians also suffer from many natural disasters.

It was Diane Cable, another collaborator, who brought to Morgan’s attention that many Haitians suffer from hypertension, and the less salt used in the preservation of the carp product, the better. Cable is founder and executive director of Manhattan Medical Missions in Manhattan, Kansas, and has experience and contacts for on-site distribution of the smoked carp in Haiti. Clarke suggested a few preservation alternatives to sodium – so one of the first steps is to try a couple of them and see which one offers the right combination of safety and tastiness.

“It has to taste good!” Morgan said.

“I really want to show we can do this. The ultimate goal is to reduce this invasive species from the river systems.”
―Mark Morgan

That’s where another partner comes in – Glory House, which provides resources for Haitian immigrants in Kansas City. They will set up a taste test this fall for Morgan to have Haitians in KC try the different smoked products, to decide which version would be most appealing to the Haitian population.

Morgan got in touch with Convoy of Hope, a humanitarian organization based in Springfield, Missouri, which will ship the carp to Haiti. Morgan and Wheeler plan to deliver a large order of dried and smoked Asian carp to the island nation in early 2018. Convoy of Hope’s representatives were so thrilled to hear they’d be getting protein, that they offered to deliver future donations for free, Morgan said.

The final piece is sourcing the carp. Morgan and Wheeler will work with Schafer Fisheries, a USDA/FDA-inspected fish processing plant in Thomson, Illinois. Morgan has worked with them on numerous occasions.

“I really want to show we can do this,” Morgan said of this pilot project. “The ultimate goal is to reduce this invasive species from the river systems.”

Asian carp usurp habitat of native species in the Missouri and Mississippi river basins and even injure boaters as they leap out of the water when startled. Although Morgan has shown that Asian carp perform well against catfish in taste tests, the fish is bony and suffers from consumer confusion with the unsavory, bottom-feeding common carp. Commercial fishing of Asian carp is possible, although supply currently outweighs demand. Morgan has been working to find ways to introduce the fish to consumers for years, collaborating with restaurants, grocery stories and more.