Most often used as a flavoring and stability agent in beer, hops have become more popular during the past few years, due in large part to the boom in the craft brewing industry.

Hops, which are cone-shaped flowers, aren’t a new crop for Missouri, but it’s been years since hops have been a mainstay in the state.

“If you go back over 100 years, you’d find a lot of hops being grown in Missouri,” Patrick Byers said. “It was pretty common. At some point, hops shifted to the Pacific Northwest and stayed up there. The climate in that area is really great for growing hops.” 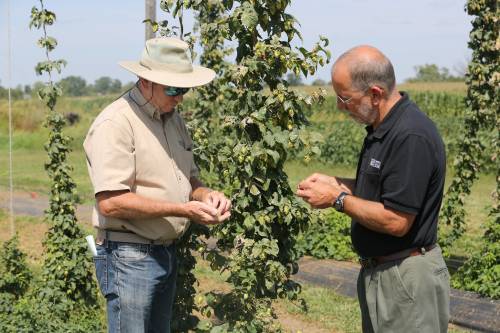 Jim Quinn (left) and Patrick Byers, University of Missouri Extension horticulturalists, have been researching hops this year at the Bradford Research Center.

Byers and Jim Quinn, both University of Missouri Extension horticulturalists, planted hops for the first time in their respective careers this year. The hop yard in located at the Bradford Research Center in Columbia, Mo., and includes 18 cultivars.

“Hops are a new crop for me, and I think it’s the case for Jim as well,” Byers said. “Both of us appreciate beer and especially beer made with hops. This research is a natural progression when we learned about the potential of the industry and the opportunity for our farmers.”

Byers and Quinn have attended numerous meetings about growing hops and learned about similar efforts in Michigan, Ohio, North Carolina and New York.

“Our thinking was that we have a tradition of hops in Missouri,” Byers said. “Why don’t we look into the situation today? When you’re thinking about craft brewing, you’re thinking about a local product. These craft brewers have an interest in sourcing hops locally. That’s the demand part. The supply part is showing farmers that there is potential here.”

Byers and Quinn competed and secured funds from the Missouri Department of Agriculture to establish its hop yard. The duo planted the hops in late April and saw immediate results.

“These things just jumped out of the ground and grew,” Byers said.

“The yield results were not out of this world or anything,” Quinn said. “But we did get a yield this year, which was pretty shocking. One of our main goals was just to see if the first year would be an establishment year or if we would see a yield. We definitely saw a yield.”

“Based on what we saw, it might be worth it to go after a yield in that first year,” Byers added. “If you can get your plants in early enough, it could definitely be worth it.”

The hops grant is for two years, so Byers and Quinn are interested to see how the second year unfolds.

“Some of that growth could be a little deceiving,” Byers said. “The varieties that took off and ran up the twine – are they going to do that every year, or not? We had others that didn’t grow much that could explode next year. A lot of this remains to be seen.” 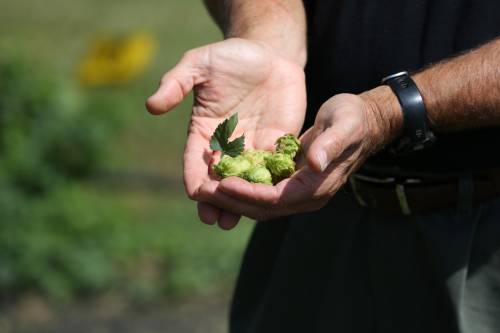 Bradford has been home to three field day, all with a focus on the hops research taking place at the Center.

The Bradford hop yard is divided into two sections. The first section contains 200 plants in replicated plots, comprised of 10 cultivars, which are commonly grown in the Midwest. The second section has eight cultivars recently acquired.

“We wanted to look at the leading hops varieties that were recommended for the Midwest,” Byers said. “We wanted to test those varieties here. The rest of our yard is made up of things that we just wanted to try.”

As part of the grant, Byers and Quinn also set up three field days which engaged the local community with the process of establishing a hop yard, planting, harvesting and promoting their product. The duo have laid their entire workflow out during these field days.

“We have done a number of outreach events with a focus on sharing what we have learned,” Byers said. “We’ve met with a lot of growers, as well as surveying local craft brewers. We’re trying to see what their needs are, as far as quality and type of hops.”

Quinn said that Columbus, Galena and Chinook are among the varieties growing the best. They are currently running quality analysis on the hops and should have those results shortly.

There are some challenges with growing hops in Missouri. Disease, insects and infrastructure are all on the list.

“We don’t have a lot of the infrastructure in Missouri to see huge yields, but it’s growing,” Quinn said. “There are definitely disease issues, such as viruses and fungal pathogens like downy and powdery mildew. Mites, leafhoppers and Japanese beetles are common insect pests.

“There’s also the issue with the day length in Missouri. Minnesota, Iowa and Wisconsin are all good areas for hops because they have adequate day length. We’ll see how things progress with our research.”