With a focus on sustainable agriculture, the Hundley-Whaley Research Center twilight tour stayed busy throughout the evening on Tuesday, Aug. 22.

“The sustainable agriculture topics are ones that we really need to pay attention to,” said Superintendent Bruce Burdick. “Several of the producers we interact with are interested in these topics, and these tours allowed us to reach out to others who have a different perspective of agriculture.” 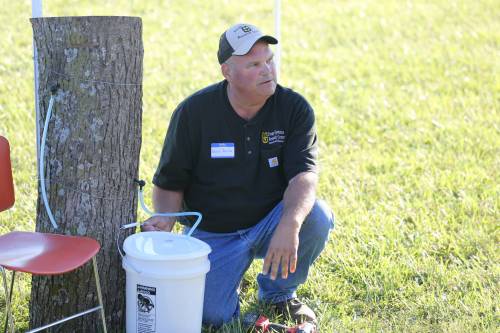 David Davis, superintendent of the Forage Systems Research Center near Linneus, presented on how to tap trees for sap.

David Davis, the superintendent of the Forage Systems Research Center near Linneus, presented on how he taps trees for sap, eventually boiling the sap and turning it into maple syrup. Wurdack Research Center Superintendent Dusty Walter gave attendees an update on the monarch habitat plots that the University of Missouri Agricultural Research Centers have planted across the state.

Gregory Ormsby Mori, MU Center for Agroforestry outreach coordinator, showed guests how to grow mushrooms on logs. Leo Sharashkin, who earned his Ph.D. in forestry from Mizzou, presented on how to keep bees naturally in horizontal hives.

“Having variety in our tours is important,” Burdick said. “It keeps our guests’ attention and gives everyone a different perspective on agriculture. It also may open their eyes to things that they haven’t thought about before.”

“Dicamba is one of the biggest issues we have going on in Missouri right now,” Burdick said. “It’s something we have to address. I think Kevin did a great job of explaining the situation and where we will go from here.”

Christopher Daubert, MU College of Agriculture, Food and Natural Resources vice chancellor and dean, addressed the crowd during the free dinner. Daubert began his duties at CAFNR on Aug. 1. Marshall Stewart, MU vice chancellor of extension and engagement, and Mark McIntosh, vice chancellor for research, graduate studies and economic development, also made the trip to the twilight tour.

“It’s very important for them to see who we are and how we work,” Burdick said. “It was great for the group to see the support we have at the Hundley-Whaley Research Center.”