Finding the unique ways that weeds can spread has become a calling card for the University of Missouri College of Agriculture, Food and Natural Resources Division of Plant Sciences’ weed science program.

For the past year, graduate student Eric Oseland has dug through more than 60 bags of bird feed, looking for which weed seeds show up in the various mixes. By the time Oseland completes the project, he will have searched through more than 100 bags.

Pigweed is the main weed Oseland is on the lookout for. 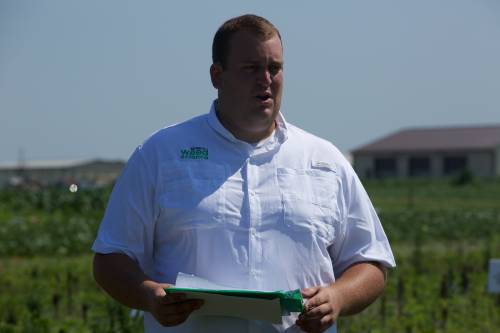 “We run all of the feed through a sieve,” said Oseland. “We extract out the weed seed, particularly the pigweed. We have a sieve that solely lets pigweed seed fall through. We then go through that seed, count it and grow the weeds in our greenhouse to determine the viability percentage. You can’t identify the pigweed species based on its seed so you have to plant it.”

“Any seed that wasn’t supposed to be in the mix, we considered it a weed seed,” Oseland said. “Along with palmer and waterhemp, we found tumble pigweed, ragweed, Johnson grass, barnyard grass, morning glory, among many others. There were a lot in the mixes.”

The bird feed bags came from a variety of local stores. The feed was purchased at any store that sells bird feed, such as Walmart, Home Depot, Lowe’s and Orscheln. Oseland is currently looking through bags from surrounding states as well to compare the results.

“We got every brand that we could find,” said Kevin Bradley, an associate professor and MU Extension weed scientist. Bradley also helps lead the weed science program. “With the feed from other states, we’re just trying to see if there are any differences or correlations between the two.”

Oseland said, thus far, he has found pigweed seeds in every single mix he has searched.

“To me, it’s been really surprising,” he said. “We found 8,000 pigweed seeds per pound in one mix. For a 50-pound bag, that’s 400,000 pigweed seeds in just one bag. When you think about the number of bags on the shelf, that’s a lot of pigweed being spread accidently.”

Oseland added that the processed mixes, which include items such as nuts and berries, tend to have less pigweed. Mixes with millet tend to have more pigweed.

“A lot of those results are due to the small seed size in millet,” Oseland said. “With such a small seed size, it’s hard to separate out, especially in the combine.”

The weeds that Oseland is growing in the greenhouse are also being checked to see if they are glyphosate resistant.

The idea for the research came in part from CRP mix contamination in bordering states. Bradley and Oseland started to brainstorm how weed seeds could travel through other commercial mixes.

“We are always interested in looking at items that may not be regulated that could have weed-seed contamination,” Bradley said. “With the focus on palmer amaranth, there’s more and more awareness out there. We want to continue to bring to light how these seeds can travel.

“Bird feed is just another way that palmer can spread. It’s not great news. Hopefully we can talk with the individuals in the industry about our findings. To find palmer in bird feed like this, with any regularity, it’s concerning.”