The Greenley Research Center showed off its extensive collaborative efforts, as well as its new Grace Greenley Farm, during its 40th annual field day on Tuesday, Aug. 8.

More than 400 individuals attended the event, which was focused on showcasing the water quality projects that Greenley will be conducting on its new farm.

“The weather, having the new farm and celebrating our 40th anniversary – it was just a good culmination of everything coming together,” said Superintendent Dana Harder. “We got a lot of positive comments about our partnership with USDA’s Natural Resources Conservation Service (NRCS) and Missouri Land Improvement Contractors Association (LICA). People are excited about what’s happening at the Grace Greenley Farm.” 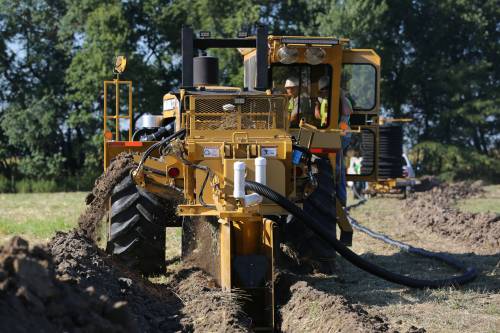 The 240-acre Grace Greenley Farm was officially deeded over to the Center in 2015 from Miss Hortense Greenley’s estate upon her passing. The Center has been actively developing the farm, which includes 140 acres of tillable ground. The field day was held at the new farm.

The event featured several speakers during the free breakfast, including the University of Missouri College of Agriculture, Food and Natural Resources Vice Chancellor and Dean Christopher Daubert and Missouri Department of Agriculture Director Chris Chinn. Daubert began his duties on Aug. 1. Chinn was named director in January.

“It’s really a new beginning for us in a lot of ways,” Harder said. “We have a new farm, a new vice chancellor and dean, and a new director of agriculture. It’s an exciting time.”

Chinn is from Clarence, Mo., which is just 25 miles south of the Greenley Research Center.

“It’s great to have a director who really understands the importance of agriculture in this part of the state,” Harder said.

The field day also showcased live demonstrations and installations of several drainage water management and sub-irrigation systems. Presentations were given by collaborators such as NRCS, LICA, Agri Drain and Ecosystem Services Exchange (ESE). Dozens of volunteers, contractors and vendors donated their time and energy to the project.

“There would be no way for us to make this a reality without those partnerships,” Harder said. “They have helped with the materials, structures and equipment – as well as a lot of their time. Each part is extremely important.” 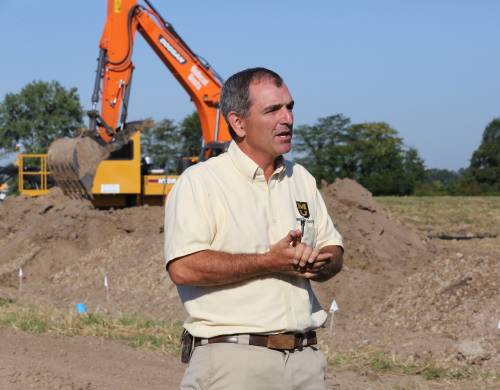 Agronomist Kelly Nelson was one of the presenters during the Greenley Research Center field day, which showcased the Grace Greenley Farm.

Renee Adler, a Mizzou graduate student in the Division of Plant Sciences, talked about the utility of a cover crop in a terraced field.

“Greenley is known nationally for its work on drainage and sub-irrigation,” Harder said. “Kelly has reached out to a lot of these individuals and connected with them. He’s done great work in terms of collaborating. We’ve got some great data that is going to lead to better recommendations for farmers.”

Along with a free breakfast, a free lunch was served at noon. There were numerous vendors on hand for guests to talk with as well.