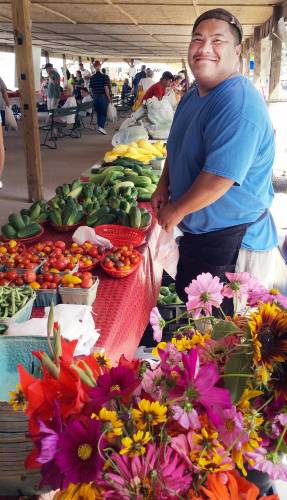 More than vegetables grow in Fue Yang’s high tunnels. It is where opportunity grows for area Hmong farmers.

Yang runs a teaching farm for University of Missouri Extension, Lincoln University and the Webb City Farmers Market. The collaborative effort is part of a grant from the Missouri Department of Agriculture.

They sell the vegetables, fruits and flowers at the Webb City Farmers Market. They also raise cows and chickens to sell. They plant and harvest by hand on small acreages, much like the Hmong did in their native Laos.

Fue Yang’s proficiency in English allows him to learn from MU and LU Extension specialists. Being bilingual allows him to teach other Hmong farmers who previously could not understand workshops taught by MU and LU faculty.

Removing the language barrier opens opportunities for the growing number of Hmong farmers in southwestern Missouri. Yang helps other small farmers learn how to obtain funds for high tunnels through Natural Resources Conservation Service grants. He then shares MU and LU research on how to grow and sell produce.

Yang calls it “learning by doing.” As each one teaches another, seeds of knowledge grow. Agriculture was “always familiar” to him. His parents had gardened in Laos and continued when they came to the United States.

The Yangs open their Rocky Comfort farm to workshops and tours to help the public understand the value of high tunnels in extending the growing season. Produce grown during the extended three-month period fetches higher prices.

The Yangs sell at several area farmers markets. Fue Yang said he likes talking to people about how and where the food grows. Buyers like the connection to local growers and the land.

Eileen Nichols, manager of the Webb City Farmers Market, says the teaching farm exposes generations of farmers with diverse backgrounds to new ways of farming. Yang’s father, like others of his generation, was skeptical of high tunnels at first. He was hesitant to use technology and methods differing from those he used in Laos.

However, the elder Yang soon changed his mind when he saw the advantages high tunnels offer. High tunnel operators, such as Fue Yang, said vegetables grow for a longer period of time and with less labor than in conventional gardens.

“Within six months, my dad bought a second 30-by-96-foot high tunnel,” the younger Yang said. They also have a seed-starter high tunnel and a third high tunnel.

The Yang farming adventure has not been without its perils. Equipment breaks. Weather brings uncertainty. Crop diseases strike. But over time, the hard work and research pay off.

Hands-on learning experiences allow Hmong farmers to put up high tunnels, start seeds and grow and market their produce. MU Extension lends tools to build high tunnels and often helps construct the high tunnels as part of a workshop. Extension specialists also teach about new technology such as drones, and MU research on irrigation, soil testing and other horticulture issues.

The Yangs are part of the growing Hmong population in southwestern Missouri. The most recent U.S. Census data shows 210 Hmong residents in McDonald County and another 537 in Newton County. Barry County reports 189. The area’s Hmong population has skyrocketed since 2000, when only 26 Hmong lived in Missouri.

Members of the Hmong community came to America from Southeast Asia, mostly Thailand, Vietnam and Laos. Many received asylum as refugees in the U.S. after the Vietnam War because of their aid to American soldiers and the CIA. Yang’s father was part of a Hmong resistance movement to communism in Laos during the Vietnam War.

The oldest of seven children, Fue was a month old when the family found refuge in Massachusetts in 1980. The family worked there and in Wisconsin before moving to southwestern Missouri and warmer climates.

They yearned to return to their agrarian culture, and MU and LU Extension were there to help.

“MU and LU Extension bring the expertise,” said Nichols. “It has been a fruitful collaboration.” Nichols and volunteers like providing a personal connection between vendors and sellers.

Yang appreciates the team, which mentors him so that he can pass his knowledge on to future generations and to those for whom language remains a barrier.

He describes it as moving backward to go forward. “Backwards in the sense of small, local farmers growing for their families and surrounding community. Forward in the sense that one day, with enough small local farmers, we might just feed the world, or at least our part of it,” he said.