In 2005 the nation quaked as one of the most disastrous hurricanes in American history landed on the Gulf Coast. Hurricane Katrina hit in late August and less than one month later Hurricane Rita followed. Rachel Patteson, a senior in the School of Natural Resources, remembers it well.

Patteson had just moved from Montana to Shreveport, Louisiana when the storms hit. Being on the north side of the state, the loss was milder, but her location was certainly not immune to the effects.

“People had to migrate north,” Patteson said. “People were lined up on the streets on the side of the highway and they were there for a few weeks.”

What affected Patteson even more than the long lines of people displaced from their homes was the background behind them. 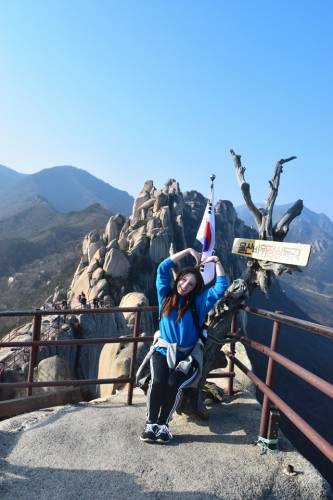 Patteson on top of a mountain in Korea called Seoraksan. Photo courtesy of Rachel Patteson.

“We were very poor. The people out there from New Orleans on the streets were also from poor communities,” Patteson said. “If that had happened to us… our house would have been destroyed, we would have no money to go anywhere.”

At the time Patteson was unaware of the connection between extreme weather events and climate change. All she knew was that those most affected by natural disasters were the ones who had the fewest resources to combat it.

Patteson’s concern for environmental science and climate change has since led her to MU and has taken her across the globe – most recently to Fairbanks, Alaska, for a National Science Foundation Research Experience for Undergraduates (REU).

A Louisiana native, Patteson says she made the near 600-mile trek to MU after being impressed by the environmental sciences program at the College of Agriculture, Food and Natural Resources. The university-offered minor in Korean was a bonus.

It was during her junior year of high school that the music genre K-Pop (Korean Pop) was being made famous by Psy’s “Gangnam Style.”

Patteson had just received her first phone and discovered the world of YouTube. After browsing through videos, she stumbled upon her first K-Pop song and fell in love with the language.

“I decided to just teach myself Korean because there weren’t any resources around me,” Patteson said.

Patteson’s fascination with the music led to a study of the language and of the culture, eventually spurring her involvement with MU’s Asian American Association. Patteson served as the service chair during the 2015-16 academic year and aided foreign students on campus by giving tours and providing English lessons. 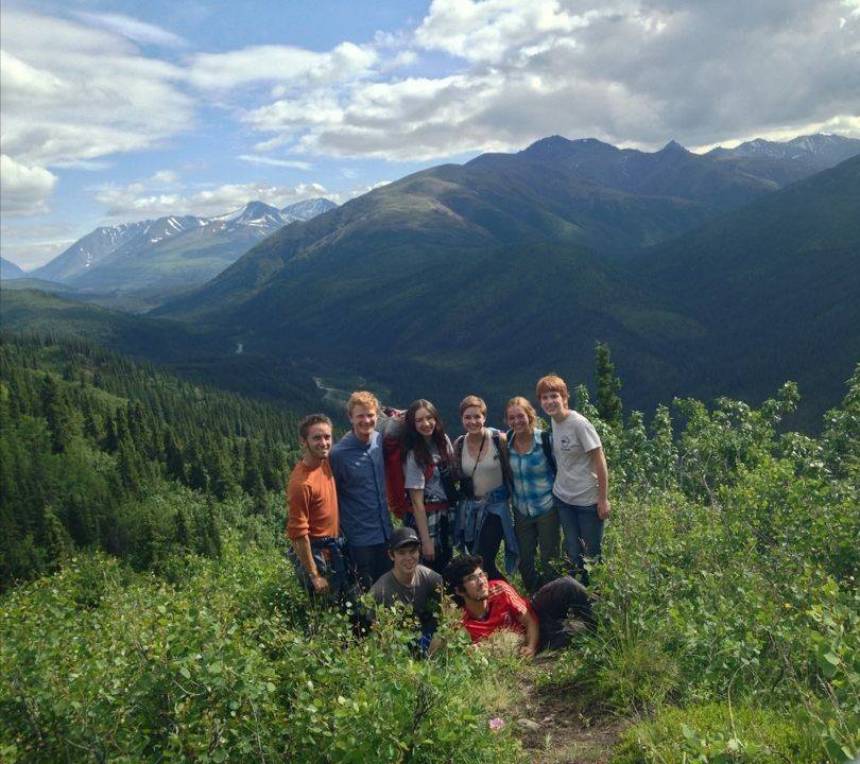 “For a student to do as well in the classroom as she does and manage all of the extracurricular activities that she does – it’s really phenomenal to see an individual balance their time in that manner,” Keith Goyne, associate professor of environmental soil chemistry and associate director of the School of Natural Resources, said.

In August of 2015, Patteson’s interest prompted a semester-long study abroad trip to Korea University in Seoul. While there, she took classes not only in Korean language, but also environmental chemistry and microbiology

To help fund the trip, Patteson applied for the U.S. Department of State’s Benjamin A. Gilman International Scholarship program. The program seeks to help students of limited financial need study abroad, particularly in areas of critical need languages. The extensive application process required not one, but two essays. Patteson’s work ultimately paid off as she was a 2015-16 recipient.

Patteson did not waste any time finding her next excursion.

The next trip would be from late July to early August of 2016 in Yakutsk at the Russian North-Eastern Federal University. Her two-week trip was spent studying permafrost, an underground layer where water accumulates and freezes. The thawing of permafrost and climate change are closely linked, Patteson says.

“Both of those trips were me trying to go to different environments and reach out to different cultures and see how communities are affected by climate change,” Patteson said. 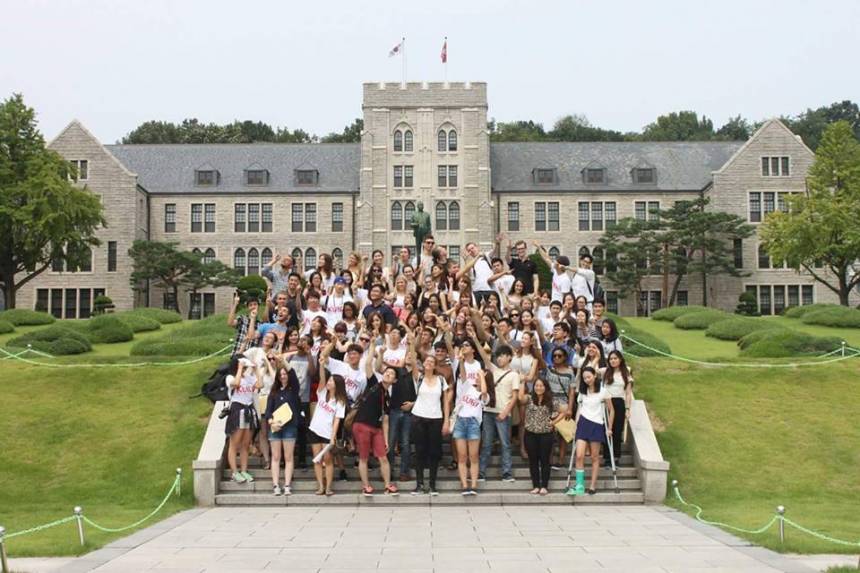 Patteson, front row first from left, in front of Korea University on her study abroad trip during fall of 2015. Photo courtesy of Rachel Patteson.

During her stay in Russia, she became acquainted with Kenji Yoshikawa, a supervisor of the trip and also a research professor at the University of Alaska Fairbanks – a connection that would soon come in handy.

When looking for opportunities for the summer of 2017, Patteson began browsing the National Science Foundation’s list of Research Experiences for Undergraduate sites.

Patteson was among 60-70 applicants who applied for the REU site Understanding the Arctic as a System located at University of Alaska Fairbanks. She had applied for an REU site in the past, but with no luck.

“I was half expecting to not get it,” Patteson said. “But, I also half expected to get it because I reached out to the professors.” She also reached out to Yoshikawa who served as a reference and provided a letter of recommendation. 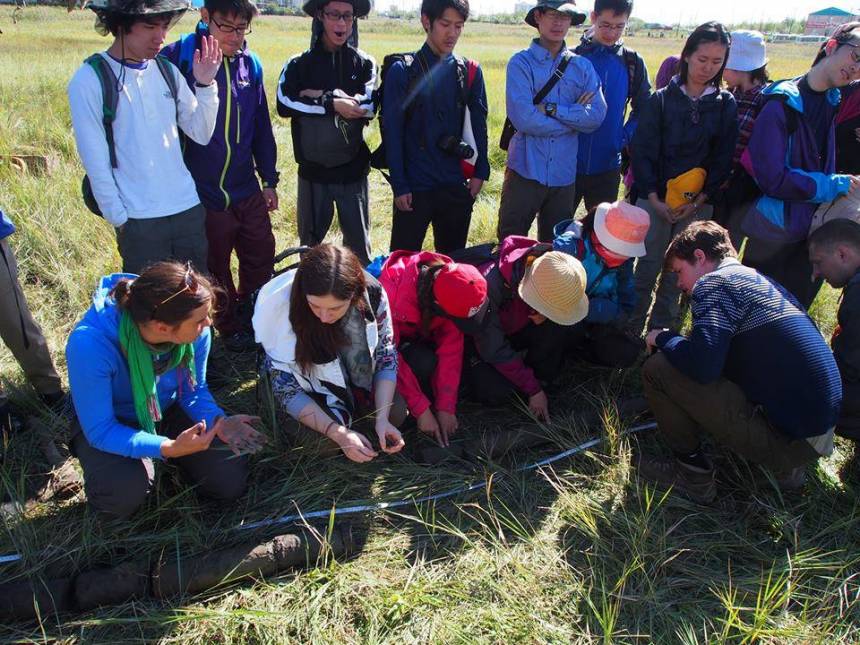 Her more optimistic half won out. Patteson was one of eight to receive funding for housing, transportation and a stipend.

She arrived in Fairbanks on June 3 and will depart August 7. Her days begin with a lecture from a professor with the university’s International Arctic Research Center (IARC) and are followed by working under Igor Polyakov, professor with IARC and the College of Natural Science and Mathematics. Her research is primarily focused on using statistical analysis to correlate arctic sea mixing in the deeper region with storms – another subject closely linked to climate change, Patteson says.

This fall, Patteson will start her fifth and final year of undergraduate studies. The extra year is accounted for by her three minors: Korean, physics and geology.

Patteson said her next step is probably graduate school, but any step will definitely include board games – a hobby she and her friends take fairly seriously. Patteson can often be found in a friend’s home or at Valhalla’s Gate, a Columbia gaming store, enjoying the company of friends while deep into a round of the latest game. 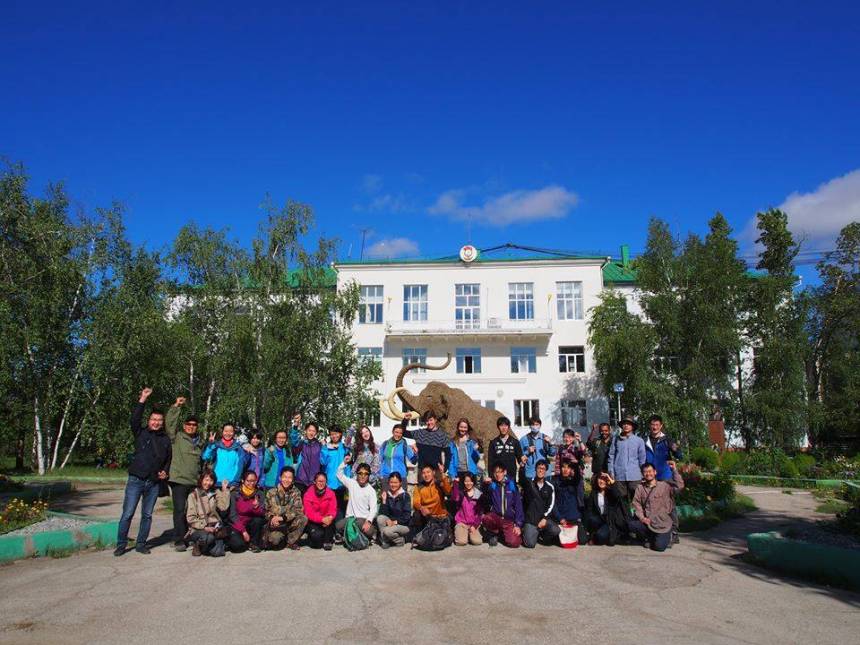 “I have friends who all have an interest in board games,” Patteson said. “We just come together and enjoy the night.”

In between games, Patteson is applying for fellowships to make graduate school happen. Her end goal is a Ph.D., researching what started her interest in it all to begin with – climate change.

“She has the intellect and the drive to pretty much do whatever she wants to do,” Goyne said.

From Shreveport to Columbia to around the world, Patteson says she has carried the memory of the 2005 hurricane season along the way. To Patteson, many of today’s debates on climate change are unnecessary. Regardless of whether or not it is caused by humans or naturally-caused, most agree that it is occurring.

Patteson said the cause does not change the response: “We need to help the community no matter why you think it’s happening.”