Eric Aldrich has been passionate about the weather since he… Expand ▸

Central Missouri is going to be a prime location for the upcoming total solar eclipse, which will pass through the United States on Monday, Aug. 21 – the first total eclipse to happen in the U.S. since 1918.

The event is bringing numerous opportunities to Columbia, Jefferson City and the surrounding areas, including a chance to collaborate with the National Aeronautics and Space Administration (NASA). Jefferson City will be one of the seven sites, chosen by NASA, to conduct a live broadcast during the eclipse. Eric Aldrich, a technology resource coordinator and an adjunct teaching instructor in meteorology at the University of Missouri, will host the broadcast in Jefferson City.

He will interview Janet Kavandi, the director of the Glenn Research Center in Cleveland, Ohio, and a NASA astronaut who has logged more than 33 days in space. Kavandi has traveled more than 13.1 million miles in 535 Earth orbits. Along with the interview, Aldrich will broadcast the current weather conditions and highlight the various work of the MU atmospheric science program.

“This is a big opportunity for mid-Missouri and the University of Missouri as well. I’m excited to also highlight the work that our atmospheric science program is doing.”

A Passion for Weather 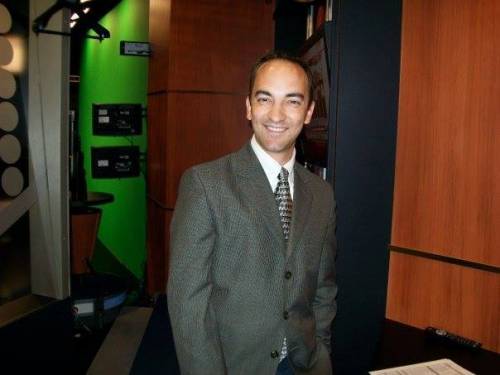 Like a lot of children, four-year-old Eric Aldrich was a tad scared when severe weather rolled through the St. Louis area where he grew up.

When those strong storms moved through the area, Aldrich’s parents would flip on the television and follow the local weatherman.

“He was talking about how bad everything was, but he was also calming everyone down,” Aldrich said. “That was cool to me. I was still pretty scared of those strong storms, though.”

A few years later, Aldrich realized that if he knew when the storms were coming, that knowledge could mitigate his fear. That brought back memories of watching the local weatherman helping individuals understand how the weather was changing and when it was moving into the area. Something about those experiences clicked with Aldrich.

“I figured out that if I knew when a storm was going to come, I probably wouldn’t be so scared of it,” Aldrich said. “It was at that point that I knew I wanted to be like the guy on TV. I wanted to help calm people down.”

With a continued passion for weather, Aldrich earned his bachelor’s degree from the University of Missouri in meteorology in 2001 and worked as a meteorologist at KOMU after graduation. After a short stop in Arkansas, Aldrich returned to KOMU and served as the morning meteorologist until 2015.

“I got a little homesick when I went to Arkansas,” Aldrich said. “There was too much red.”

Aldrich was focused on passing his weather knowledge on through the television medium.

“I wanted to do TV weather the entire time,” he said. “It sounds corny, but I wanted to share my passion for weather with everyone else. That’s easy to do on TV.”

During his time at KOMU, Aldrich also completed his master’s degree in atmospheric science at Mizzou, as well as started teaching a handful of weather-related courses at MU – Introductory Meteorology (AS-1050) and two broadcast meteorology courses.

“Tony Lupo (professor of atmospheric science) reached out to me around 2007 about needing an instructor for the intro meteorology course,” Aldrich said. “I told him no right away. He called me back the next week with the same question, and I had the exact same answer. A couple weeks later he gave me a call and wanted to meet for lunch. I met him and he told me that he was still looking for an instructor. I finally caved and told him that I would only teach for one semester and one semester only.

“After my first week of teaching, I went up to Tony’s office and told him that I was his man. I wanted to keep teaching. I loved it – and I still really enjoy teaching.”

Aldrich’s introductory course has an enrollment of around 400 students. It’s one of the few science courses at Mizzou that doesn’t include a lab. That means multiple majors end up learning from Aldrich.

“Nearly everyone is interested in the weather in some from,” he said. “Again, it’s corny, but weather impacts you each day. It’s also fun to share my passion and knowledge with students. We also get to do some pretty cool experiments.

“The introductory course is mandatory for the atmospheric science majors – and you always know which students they are. They sit in the front row and know the answers to my questions. It’s a lot of fun.”

Along with his passion for weather, Aldrich had a desire to be a teacher growing up. Combining the two was a dream come true.

“When I got caught up with everything weather, my teaching dreams took a step to the side but they were always there,” he said.

Aldrich has always made it a point to connect with his students and to show up where they are in terms of technology. Twitter was becoming more popular early in Aldrich’s career, and he soon noticed that students were glued to the site on their phones. 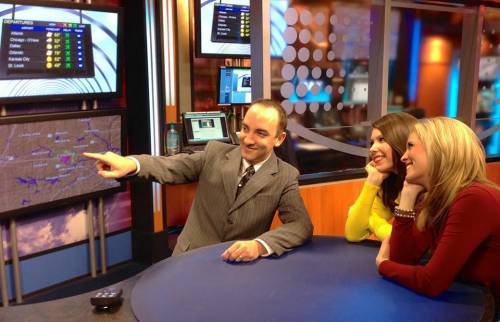 Aldrich is an adjunct teaching instructor in meteorology at the University of Missouri, teaching the Introductory Meteorology (AS-1050) course. Photo courtesy of Eric Aldrich.

“I didn’t want be that professor who forces students to shut off all of their devices,” Aldrich said. “I just felt like that was a negative way to begin the semester.”

Instead of diverting the students away from social media, Aldrich created a course account where he would answer questions and engage with his classroom.

“Twitter was the new and cool thing, so I just decided to reach out to students there,” Aldrich said. “I had them use a hashtag to ask me questions and I would answer them during class. It worked really well and the students loved it.”

That experience sparked in an interest in educational technologies.

“There was a big push for using more technology in the classroom early in my career,” Aldrich said. “I had been waking up at 2:30 a.m. for the past 12 years as a meteorologist, so I was ready for a change.”

Aldrich has served as a technology resource coordinator since 2015 in Educational Technologies at Missouri (ET@MO). He has continued to teach during his transition as well.

NASA reached out to the Jefferson City Convention and Visitors Bureau looking for someone who could host the live broadcast when they decided on their seven locations. Aldrich’s name was thrown out as a possible host. When he first received the call about doing the live broadcast with NASA, Aldrich wasn’t sure it would be something he would be interested in. 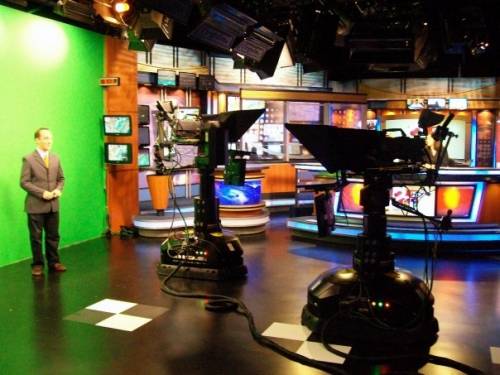 “As I was getting around to responding to the original request, just to get more information, I get a call and the ID says, ‘United States Government,’” Aldrich said. “When the U.S. government calls your phone, you should probably answer. The caller was from NASA, and he knew all about me. He had done research and watched me on YouTube. He said that I seemed like a legitimate TV personality, which was nice.

“He explained what all would be going on and I was happy to accept.”

Part of NASA’s goal with the live broadcasts is to see how the weather changes as the eclipse moves through the United States.

“They wanted a host who knew a little science and weather and had TV experience,” Aldrich said. “They didn’t want someone affiliated with a TV station, as to not show favoritism. It’s an honor to be chosen.”

Each of the seven locations are places where the eclipse will happen in its entirety. The total solar eclipse will enter the northwest corner of Missouri around 1:06 p.m. and exit the southwest corner around 1:21 p.m. There will be complete darkness at 1:12 p.m. in mid-Missouri, and it will last approximately two minutes and 36 seconds.

Aldrich will be on NASA TV and his segment will also be streamed live online.