Beehives in the Lake of the Ozarks are buzzing, thanks in part to University of Missouri Extension and the Missouri Department of Agriculture.

MU Extension specialists and beekeepers Travis and Joni Harper have coordinated beekeeping classes for more than 800 Missourians during the past three years. More than 300 people began beekeeping in more than 1,100 hives after attending beginning and advanced workshops. 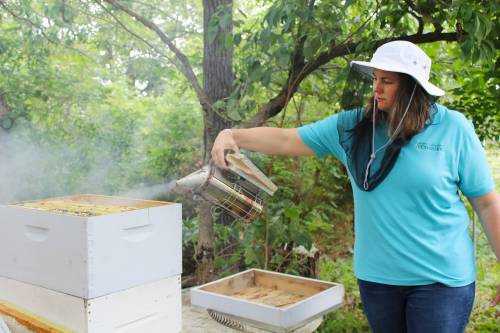 Honeybees are essential to agriculture, especially in Morgan, Moniteau and Henry counties, where the Harpers serves. Travis Harper said the new hives can pollinate more than 1,000 acres of commercially grown fruit and vegetable crops. Vendors and buyers at Missouri’s largest produce auction, in Fortuna, grow more vegetables, fruit and flowers because of more pollinators.

Community gardens planted and tended by MU Extension Master Gardeners also grow more produce to give away to area residents.

Honey production increased eight percent over the amount reported by the USDA in 2007. Despite this, beekeepers report that they can’t keep up with the demand for local honey, Joni Harper said.

That’s good news for beekeepers like Terry Mooney. He and his wife, Leslie, sell local honey in Versailles and hope to sell honey ice cream in the future. The diversity of plants in the lake area gives the honey a unique flavor.

The Mooneys are among the locals who moved to the Lake of the Ozarks to retire. Extension workshops and activities such as MU Extension’s Master Gardener program are in demand by retirees, said Mooney, a former Morgan County Extension Council member.

The Harpers share their expertise with Mooney and others. Travis has been a beekeeper since he was 11. He worked for a commercial beekeeper in exchange for equipment to start his own hives. His great-grandfather began beekeeping in response to sugar rationing during World War II. Every generation since has raised bees.

Mooney said workshops provide formal learning on beekeeping. Just as importantly, class members get a chance to meet other beekeepers. Much of beekeeping is trial and error, and learned from others, Mooney said.

He and his wife host the Lake of the Ozarks Beekeepers monthly meeting. The MU Extension Center in Morgan County maintains a list of area beekeepers for those who call about unwanted swarms, Joni said.