The Francis family has a Mizzou pedigree. Tony and Barb are… Expand ▸

Britton Francis was born and raised with black and gold in his blood. 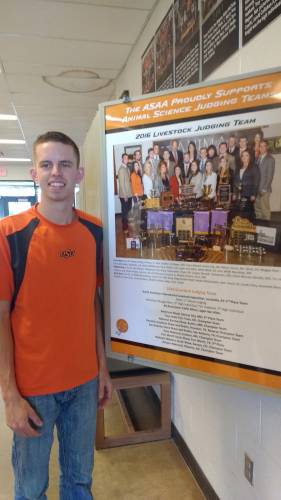 With a grandfather who was a professor of atmospheric sciences, parents who earned degrees from the University of Missouri and a brother currently earning a degree in plant sciences, the Francis family, who hail from Paris, Mo., has a Mizzou pedigree.

Although Britton didn’t receive his bachelor’s degree from MU, he is officially joining the Mizzou College of Agriculture, Food and Natural Resources’ family in August. Britton will be working on his master’s degree in meat science, as well as coaching the livestock judging team.

“I was ecstatic about the opportunity to coach the livestock judging team at Mizzou,” Britton said. “When I got the call from Dr. (Bryon) Wiegand about the position and being able to go to graduate school under his supervision, I didn’t even know how to respond. I was in shock. I believe the first thing I told him was to let me think about it and get back with him. It didn’t take long to sink in – that this was the opportunity of a lifetime that most 21 year olds don’t get. I’m pretty sure I called Dr. Wiegand back the next day and told him I accepted and was excited about coming back to Mizzou.”

Britton has been working with livestock since was 8 years old. He competed at the state level for several years through 4-H and continued to compete when he entered high school. It was while he was judging livestock as a junior that another door opened – competing at the collegiate level.

“During the short time judging in high school, our team became really good friends with the judging team from Eldon, as our advisors were best friends,” Britton said. “The year after state convention, Eldon’s advisor, Gary Reichel, contacted me and told me that one of his students, Joe Limbach, was looking into going to a junior college, and that I should start looking into judging collegiately as well. 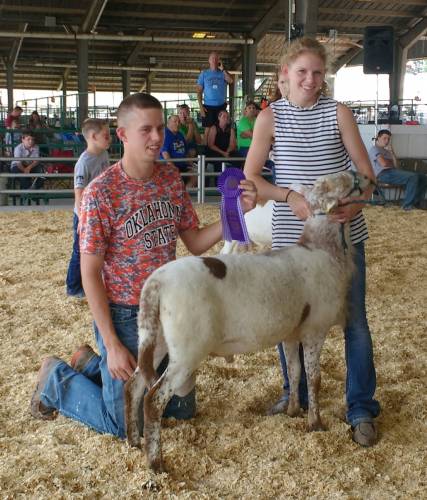 “I gave Joe a call and he told me that he had committed to Fort Scott Community College in Kansas. My parents and I made the impromptu call to (FSCC livestock judging coach) Ryan Page to see if we could make a quick stop at FSCC and visit. Mr. Page made a great first impression and made Fort Scott feel like home. I called and committed that next week.”

Britton spent two years at Fort Scott, competing in livestock judging in both years. He transferred to Oklahoma State University after that, continuing his judging journey. Britton also received his degree in animal science from OSU in May.

“When it came my time to apply for college, Mizzou just wasn’t the fit at the time,” Britton said. “I’m glad I am able to find my way back to Mizzou, and I look forward to the many opportunities that lie ahead, including meeting the great students and working with the faculty.”

A livestock judging team is made up of five members whose scores count toward the final point total. Each member of the team judges four livestock species – cattle, sheep, goats and hogs.

“There are 12 classes in every contest consisting of either breeding or market animals,” Britton said. “Each class is made up of four animals and are placed based on desired qualities or traits. After all classes have been placed, then members will give oral reasons to officials to back up their placings. Individuals are scored based on areas such as accuracy, presentation, voice fluctuation and flow.”

After a year hiatus, the Mizzou livestock judging team will return this fall.

“Adding the program back, I hope to bring a lot, if not all, of the Missouri kids back to Mizzou that have gone off to another college to judge livestock,” Britton said. “For all the current students, it will be a great opportunity to join a competitive team and expand their knowledge.”

Britton followed in his father’s footsteps in terms of degree, as Tony Francis earned an animal science degree from Mizzou in 1989. 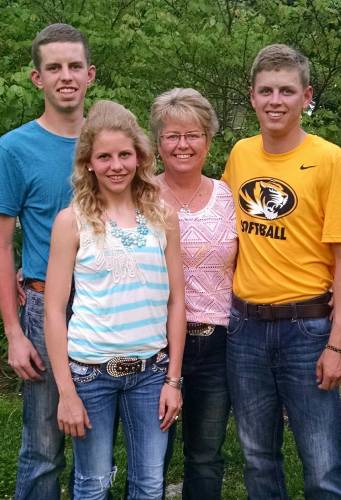 “Going to Mizzou was life changing,” Tony said. “I was from a small town and MU quickly became a home away from home. I made lifelong friends and CAFNR always had a family feel.”

Britton’s mother, Barb, is a graduate of MU’s College of Human Environmental Sciences. Brant, Britton’s younger brother, is currently working toward his plant sciences degree with an emphasis in turf management. Brant was sold on attending Mizzou after meeting with Brad Fresenburg, MU Extension turfgrass specialist. With a passion for sports, Brant found a common link between sports and agriculture with turf.

“When I was able to visit and see the turfgrass opportunities, it definitely sparked an interest,” said Brant, who will be a junior this fall. “It just seemed like the right fit.”

Brant is interning at The Ballpark of the Palm Beaches in West Palm Beach, Florida, this summer. This year the facility hosted its inaugural spring training season, welcoming the Houston Astros and the Washington Nationals.

The Francis family raises cattle and sheep and spent many summers traveling for 4-H and FFA events. Those trips installed a passion for agriculture in both Britton and Brant.

The two were involved in a lot of the same activities, as Britton is only 13 months older than Brant.

The youngest Francis sibling, Aly, will be a junior at Paris High School in the fall. She is following in her brother’s footsteps thus far, competing in 4-H and FFA events. While she hasn’t made a college decision yet, she has several good references if she heads to Mizzou.

“I am super excited to be joining the CAFNR family,” Britton said. “I was born, raised and always rooted for the Tigers.”