After opening a cold storage unit nestled inside the Sears Greenhouse, Beverly Agtuca points at one soybean plant growing in an inoculant of rhizobia, a special kind of bacteria that fixes nitrogen. Then she moves those plants next to a batch of soybean sprouts growing without the rhizobia bacteria, but with a traditional nitrogen-laden fertilizer. Given the plants’ collective youth at this stage, it is not possible to distinguish the batches. 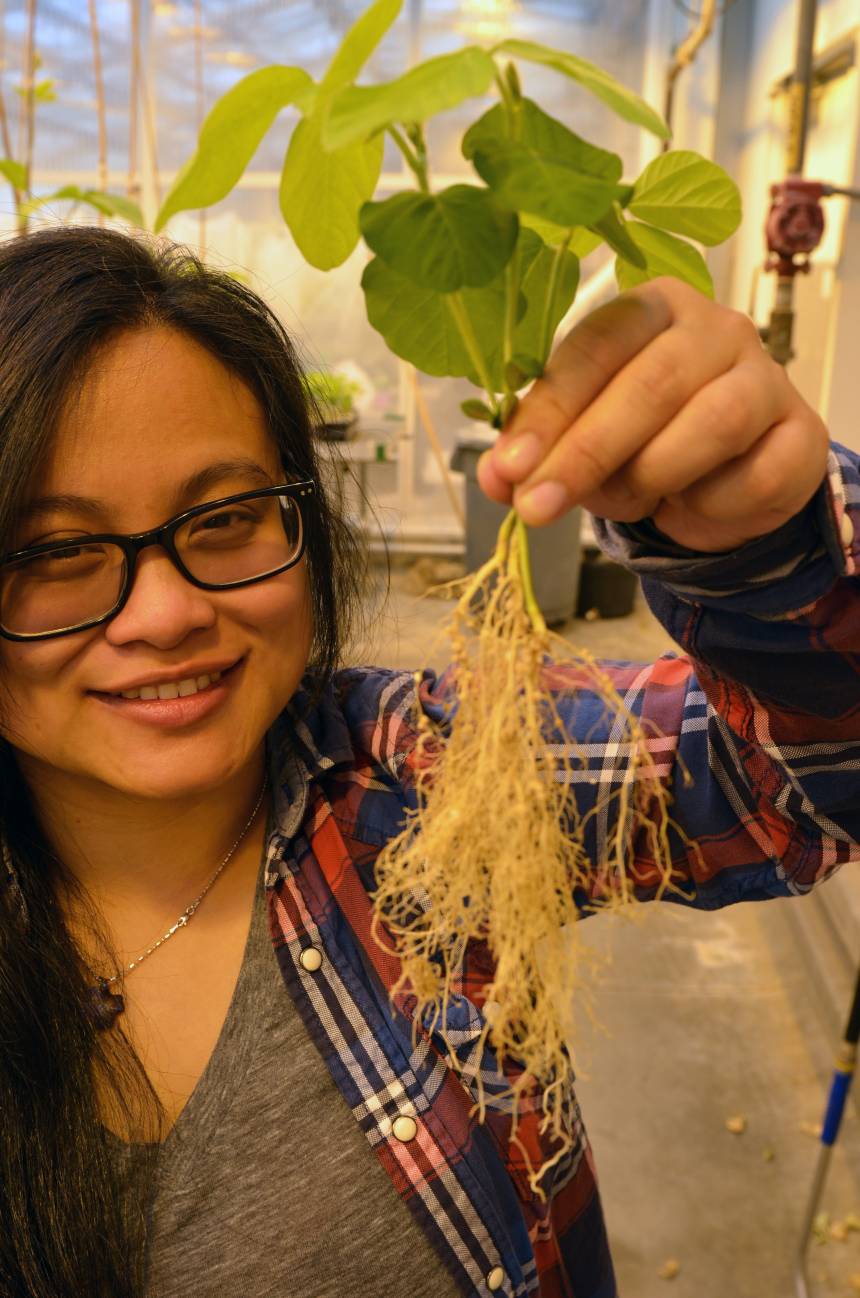 Same height. Same color of green. Same healthy leaves. Only the soils themselves serve as a differentiator between the two trays.

By using a rhizobia-based soil, there is a possibility of being able to achieve the same results with traditional fertilizer – while eliminating the need for nitrogen fertilizer (which can pollute water systems and ecosystems) from the growing process.

“The nitrogen-fixing rhizobacteria are actually supporting the growth systems of the plants,” says Agtuca, a second-year doctoral student in the Division of Plant Sciences. She is one of several members who work in the Bond Life Science Center laboratory of Gary Stacey, MSMC Endowed Professor of Soybean Biotechnology and Joint Curators Professor of Plant Sciences and Biochemistry.

“This gets to the question of what is called nitrogen use efficiency,” Stacey says.

Although some microbes can cause plants great harm, some – like rhizobia – can provide a great benefit to soybeans through a symbiotic relationship with plants in the legume family (like soybeans). Rhizobia is one of four types of plant growth promotion bacteria being tested in Stacey’s lab.

The rhizobia can initially be found in the natural soil. The interaction between legumes and rhizobia leads to the formation of root nodules, where a process known as bacteria nitrogen fixation (BNF) takes place. It is in the nodules where the bacteria can convert nitrogen gas into ammonia, a plant nutrient source. The plants, in turn, give the carbon sources back to the bacteria.

The relationship of rhizobia and soybeans has become the focus of Agtuca’s Ph.D. dissertation. In July 2016, she had the rare opportunity as one of a few graduate students to give an oral and poster presentation at the International Society for Molecular Plant-Microbe Interactions in Portland, Oregon.

She has credited a large amount of her success in talking in front of such large audiences to her involvement in the Preparing Tomorrow’s Leaders for Science (PTLS) program. She also placed first in the poster competition at the inaugural MU DuPont Pioneer Symposium.

The title of her presentation, “In situ metabolic profiling of symbiotic soybean-rhizobia interactions by laser ablation – electrospray ionization mass spectrometry (LAESI-MS),” touched on first stages of multi-faceted collaboration that stretches from George Washington University (GWU) in Washington, D.C., to Columbia to the Pacific Northwest National Laboratory in Richland, Washington.

“It’s kind of cool that we can sit in the middle of the country and basically pull in cutting-edge technology through the scientific network,” Stacey says.

Through a three-year grant from the U.S. Department of Energy, Agtuca, Stacey and other members of their collective team have been developing LAESI-MS technology that can catalog the contents of single plant cells – in particular the infected and uninfected cells in the nodules. Stacey is serving as the primary investigator of the project. 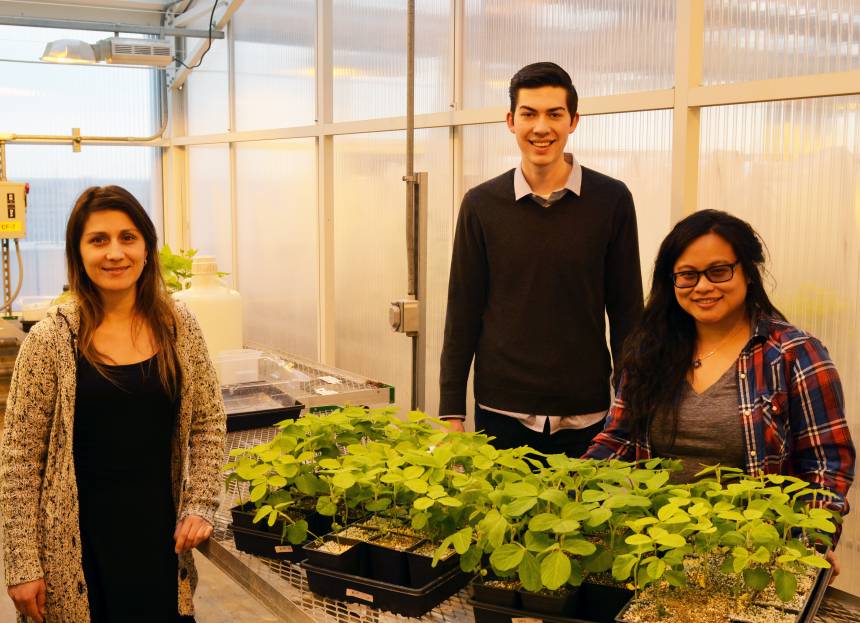 The project first came around when Agtuca started her Ph.D. in 2014 after having worked as an undergraduate intern for several years at Brookhaven National Laboratory on Long Island, New York, for Richard Ferrieri, now an adjunct faculty member in the MU chemistry department. When Agtuca found out about the opportunity, she jumped at it.

“She handles herself very well and works very hard. She had no experience in mass spectroscopy,” Stacey says of Agtuca. “This is about as heavy-duty of a mass spectroscopy project you can get.

“You find that a lot of new students are scared with new technology. It’s like everybody else. We’re all comfortable in our comfort zone, but when you move outside of it, some people are reluctant or scared. They either don’t do it or they do it real slow, but Bev has just jumped in.”

Agtuca, who is from the Long Island town of Holbrook, first developed a fascination with plants when she visited her grandmother’s farm in the Philippines. There she helped harvest harvest rice plants from 5 a.m. to 10 p.m. Seeing the toil the farmers and children there went through to produce food, she later decided to make increasing plant productivity and quality her personal mission.

“It was really a hard experience when I went there,” she says. “I want to help them.”

Zeroing in on data

To get a better idea of how this new technology works, Stacey wants you to close your eyes. Picture 10,000 people sitting in an arena. Every person fills out a survey that asks what their occupations are. Five hundred of them are school teachers, 300 work in construction and so on. You could gather data – like job titles – but you could only see things in generalities, Stacey says.

“The net effect is that you would dilute your findings because you’re just looking at averages,” he says.

Now picture one person sitting in that arena where 10,000 once sat. You could do extensive analysis on that person and get great detail about their life experiences, but you cannot then expand that person’s information to accurately reflect the life experiences of the other 9,999 people. 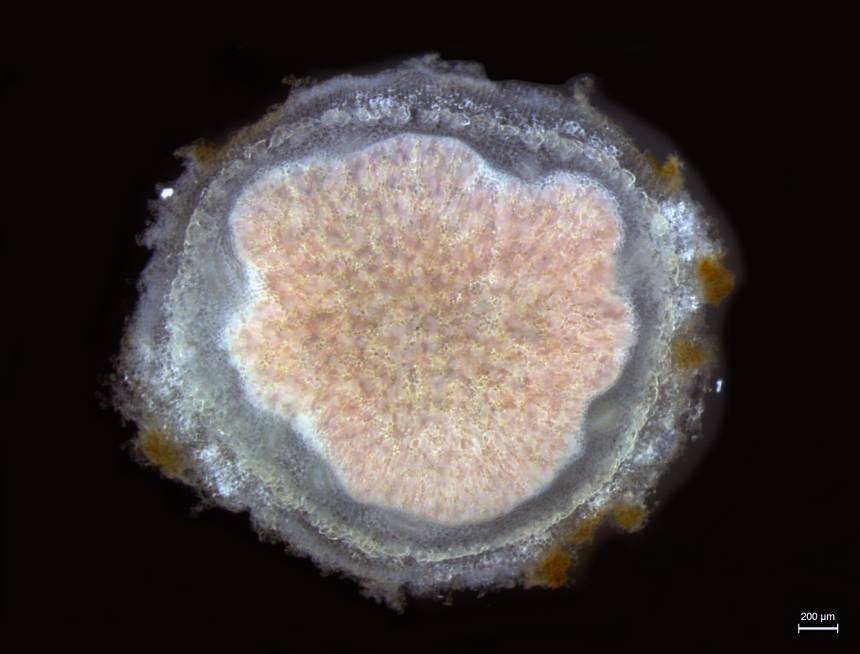 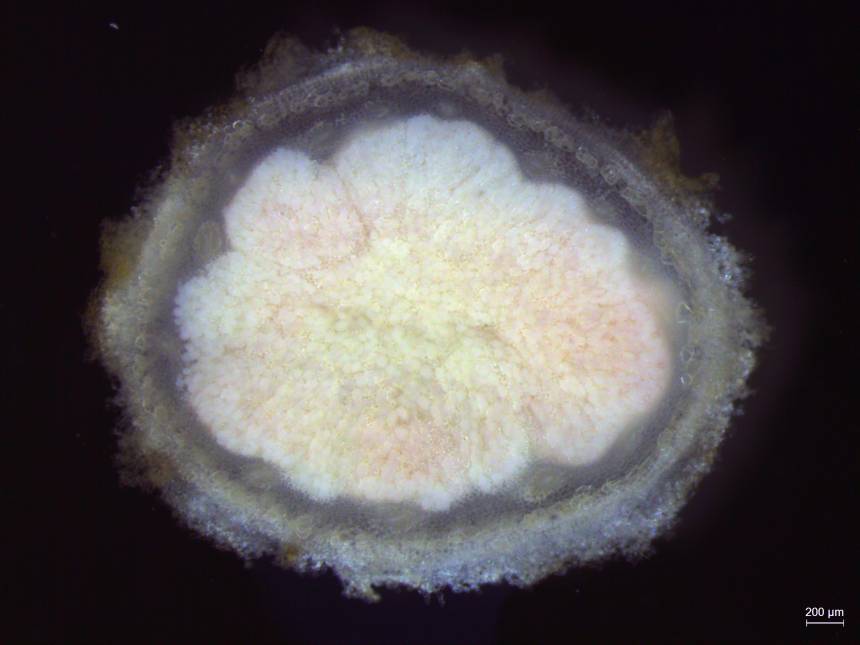 “If I take that leaf and I grind it up and I look at the expression of genes, it’s the same thing like looking at that group of 10,000 people,” Stacey says.

“Any answer I get will be an average. We ultimately want to understand the leaf as a whole, but if we’re always looking at averages, it reduces the sensitivity of our measurements because of this dilution effect.”

What Stacey and others in his laboratory are trying to do is to be able to isolate a single cell – and analyze all of its contents (DNA, RNA, metabolites, etc.) — while still keeping the overall system (the leaf, in this instance) intact.

The ultimate goal is to be able to capture enough of the information of each singular cell to be able to create a mathematical model of the metabolic systems and how they operate – and to write mathematical equations that reflect that operation to predict the future of a particular plant in a given environment.

“The problem is that we really lack the tools to create those mathematical models of those complex systems,” Stacey says. “We’re moving in that direction and that’s the ultimate goal, but we’re not quite there yet.”

Before any of that can happen, though, the researchers need to start much smaller – taking a single cell from a plant and learning what is happening in that single cell in great depth at a very high resolution.

Stacey and his colleagues determined that to perform such a task takes two incredibly rare, high-tech pieces of equipment located on opposite sides of the country: a fiber LAESI-MS laser stationed at GWU and a 21 Tesla FTICR mass spectrometer at the Environmental Molecular Sciences Lab (EMSL) at the Pacific Northwest National Laboratory.

A first academic paper overviewing their use of the LAESI-MS technique was published earlier this year in The Plant journal. Agtuca is in the process of preparing the upcoming manuscript with the team on a second academic paper. 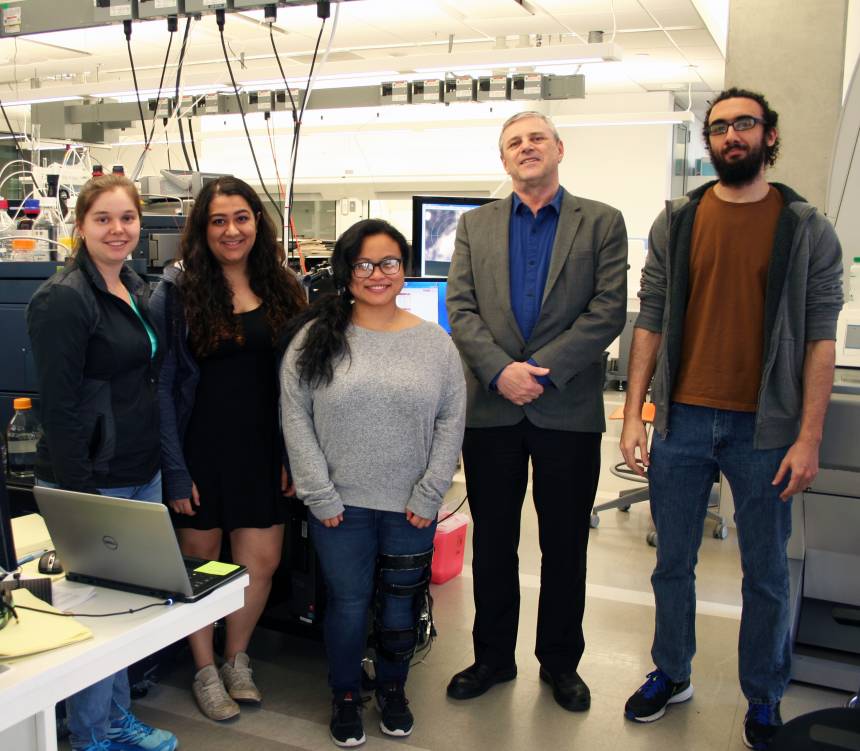 Stacey originally reached out to Ljiljana Paša-Tolić, a lead scientist for mass spectrometry at EMSL who has been a long-time collaborator of his. Paša-Tolić then introduced Stacey to Christopher Anderton at EMSL and Akos Vertes, a professor of chemistry at GWU and co-inventor of the LAESI technology.

Once the combination of the two machines is formed (being called the LAESI 21 T FTICR-MS) and perfected, it will be added to the array of instrumentation at the EMSL that can be requested by a user proposal, which are granted once a year to researchers from around the world.

Although the main pieces of equipment are located far from the MU campus, the soybean nodule samples used in the experimentation are immediately frozen with frozen nitrogen and stored in a freezer in Stacey’s lab before they are sent out for further analysis at the prototype machine at GWU.

“Basically all metabolism ends and so now we have frozen it in a particular point in time,” Stacey says.

Agtuca recently delivered the samples herself to the prototype machine after spending three weeks with the rest of the research team trying to work out kinks before the actual LAESI-MS machine can be connected to the 21 Tesla FTICR mass spectrometer later this summer at the EMSL in Washington State. 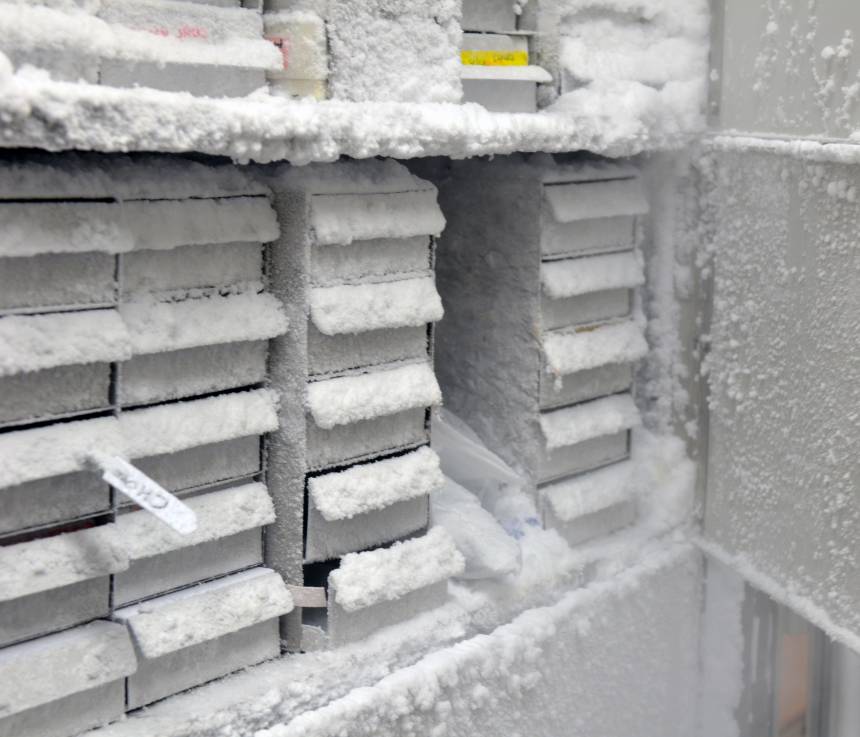 When that day does occur, the samples will never thaw, being kept on a cryostat. The LAESI’s pulsed infrared laser than hits the sample with millisecond pulses of an area measuring around 20 microns, causing it to ablate, or remove, a particular spot of the sample, resulting in a very small ablation plume of uncharged molecules.

Once that happens, the plume is then intercepted and ionized by electrospray from the mass spectrometer. Finally, the LAESI-generated ions are then sampled and measured by the mass spectrometer. Furthermore, it has the extreme sensitivity to be able to measure what is occurring in one or two cells – something none of its counterparts can do.

In addition to the possibility of having unprecedented insight to the metabolic systems of plants, the technology could actually extend far into the realm of human health as well, particularly when it comes to cancer treatment, Stacey says.

In the past, there was unspoken assumption that every cell in a tumor was essentially the same.

“What’s coming out is that is clearly not the case,” Stacey says. “Different tumor cells have different characteristics and certain tumors are more prone to proliferating and metastasizing and other tumors are not. By going in now and using single-cell sequencing methods to analyze single cells, we are finding a lot of heterogeneity.”

The key will be to find out the medical importance of that heterogeneity, Stacey says, which could give cancer specialists a new weapon in their fight.