While a student at MU, Calandro worked on a project that… Expand ▸

For David Calandro (B.S. ’16), it was not a complicated process to be named the National Conservation Youth Leader of the Year. 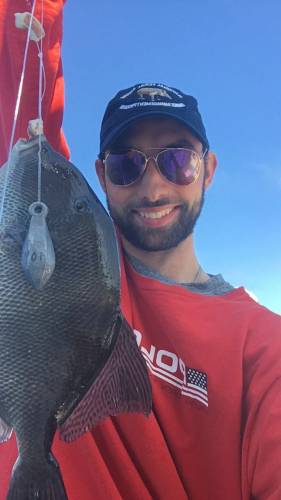 The award recognizes the conservation achievements of youth leaders within the National Wildlife Federation (NWF) affiliate ranks. In Calandro’s case, this was the Conservation Federation of Missouri, of which he serves on the board of directors. Brandon Butler, executive director of the organization, nominated Calandro. Calandro accepted the award in early June at the annual NWF meeting in Stevenson, Washington.

When speaking of his passion for the outdoors, Calandro says that it was instilled before birth as he was on the water sailing while still in the womb. From there he remembers days of hiking, fishing and hunting with his father and uncle. He recalls a revelation in fifth grade that careers exist in the field of natural resources.

“Once I found out that I could have job doing this – I knew what I wanted to do,” says Calandro, who double-majored in forestry and fisheries and wildlife.

Following graduation and a two-week surfing trip in San Diego, he began doing just that. Calandro now works for the United States Department of Agriculture, Wildlife Services, in Ironton, Missouri.

“I wake up and every day is different,” Calandro said.

Thankfully he says, more days are spent outdoors than in. Calandro is often at state parks or with private land owners working to protect Missouri wildlife from feral swine, which are extremely destructive to the environment. Calandro started this job in June of 2016, but began working part time for Wildlife Services in college – one of his many endeavors. 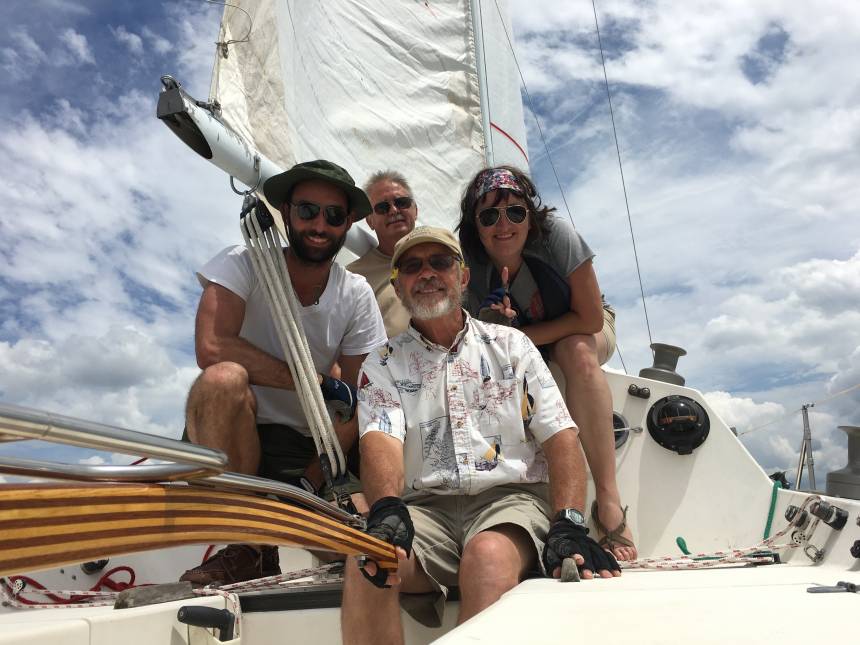 Calandro was also a teaching assistant for a learning strategies class taught by Laura Hertel, coordinator of student services for the School of Natural Resources Office of Academic Programs. Not to mention the long list of clubs he was a part of: Forestry Club, The Wildlife Society and Fisheries and Aquatic Sciences Society, to name a few.

“If there’s a club at SNR, at some point during my four years at Mizzou, I was involved with it,” Calandro said.

“He was so willing to try new things and meet as many people as he could,” Hertel said. “He has one of the most curious minds I’ve met.”

Despite all of his “over-commitments,” Calandro managed the time to found the Missouri Collegiate Conservation Alliance (MCCA), an organization aimed at keeping college students engaged, active and educated about environmental policy issues. 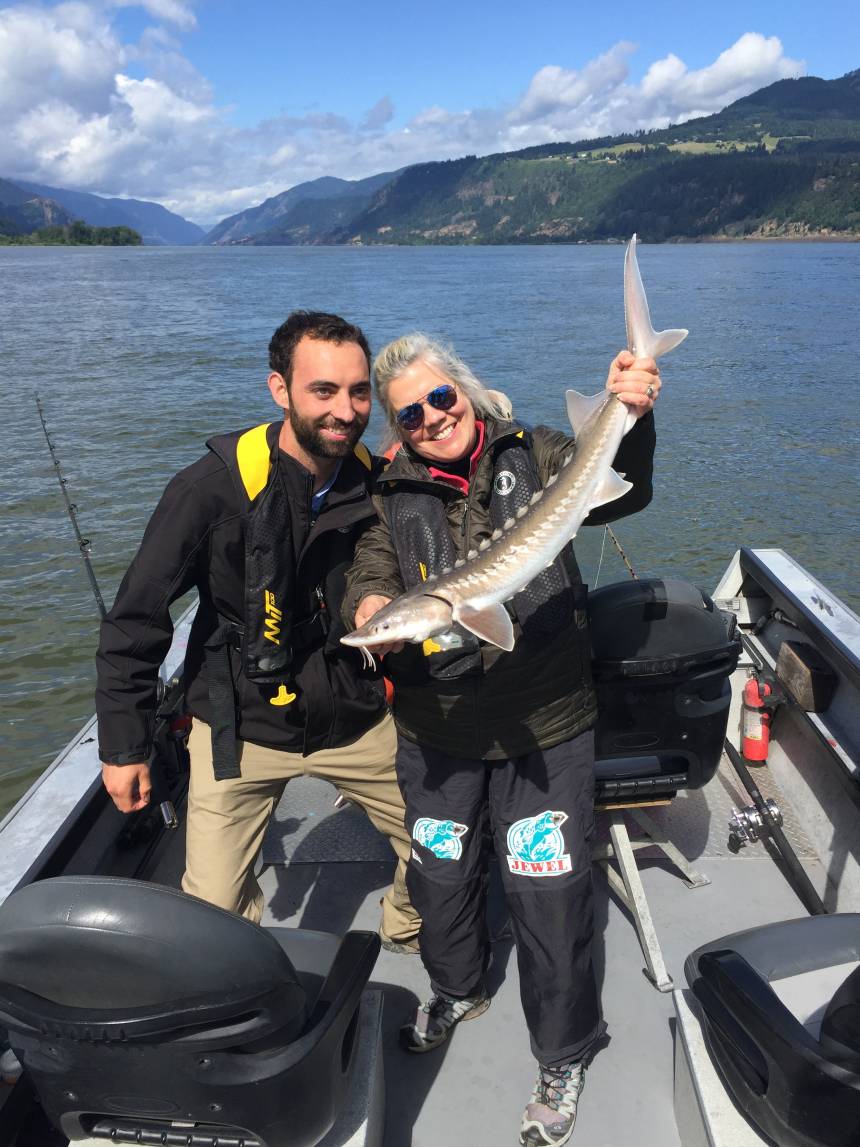 The idea for MCCA began as Calandro was sitting in his natural resources policy class. The topic of the day was environmental legislative issues that would be voted on that spring. Extremely frustrated by some of the legislation on the table, Calandro waited after class to chat with his instructor, Roger Still.

“I wondered who was doing something about it and he said, ‘Well, nobody,’” Calandro recalled.

He enlisted the help of Still and other SNR students and approached the board of directors of the Conservation Federation of Missouri with the possibility of creating an all-student organization that could quickly and efficiently disseminate information to students across Missouri.

The organization now distributes a newsletter and has a growing presence on social media. Calandro’s vision is that students from every discipline from every university in the state would be informed and actively engaging with their politicians.

“It’s just really important that we as the future leaders… are engaged right now with issues that are going to be impacting us and our community,” Calandro said. 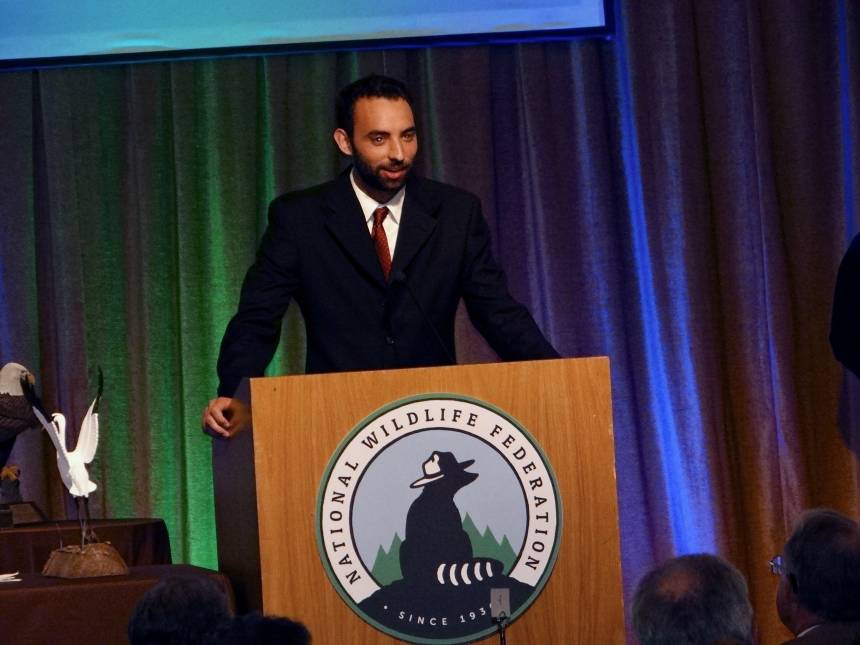 His role in founding the MCCA, along with his current work with the Conservation Federation of Missouri and USDA, Wildlife Services, were among some of the factors prompting his nomination for the National Conservation Youth Leader of the Year Award. Calandro said he felt the odds of winning were “about zero,” but they certainly had to be better than what occurred on May 23, 2011.

According to the National Weather Service, the odds of being struck by lightning in any given year are roughly one in one million. On May 23, during search and rescue the day after the Joplin tornado, Calandro happened to be that one in one million.

The day before, Joplin had experienced the most disastrous tornado to hit the United States in decades. Calandro had been part of a group search and rescue until 3 a.m. After a few hours of sleep he was back to searching.

“All of a sudden there was a really, really bright light and my whole vision and brain felt white,” Calandro said. “It felt like every molecule in my body was exploding. I had one thought when that was happening which was, ‘I just stepped on an IED.’ And then I was unconscious.” 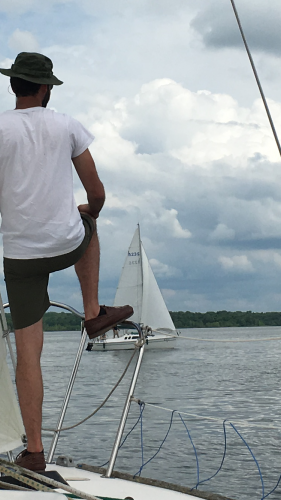 Calandro on the Cinnamon Girl during a sailboat race on Stockton Lake. Photo courtesy of David Calandro.

The force was so strong that even those walking around Calandro were knocked to the ground. Calandro was knocked down hard enough to break his tailbone, something he is still reminded of when he sits just right. Calandro walked away with no burns – only a spot on his head that shot pain through his body when touched.

Apparently Calandro has a knack for low chances, because shortly after the first phone call from NWF, he received a second.

“I was driving to the Missouri Natural Resources Conference and I was going around a roundabout and I went around the roundabout again because I was so surprised,” Calandro said. “I was just really humbled and very surprised.”

The National Wildlife Federation flew Calandro to the Skamania Lodge in Stevenson, Washington, to receive his award. He ended up turning the trip into a one-week vacation enjoying the Columbia Gorge and even reeling in a 350-pound 10-foot-long white sturgeon.

Now back in Missouri, Calandro can still be found fishing, among other hobbies. He is an artist and writer and reads for a couple hours every day.

Calandro also has an unusual flair for imitating bird calls – a talent he picked up while in the Missouri National Guard. The habit started while standing at attention for upwards of three to four hours.

“I would practice whistling for forever because that’s all I could do and I had to do it without moving my mouth and doing it really quietly so I wouldn’t get in trouble,” Calandro says.

Hertel has high hopes for what Calandro’s future has in store, “It’s inspiring to be around David. His optimism and desire are contagious. He is destined for great things.” 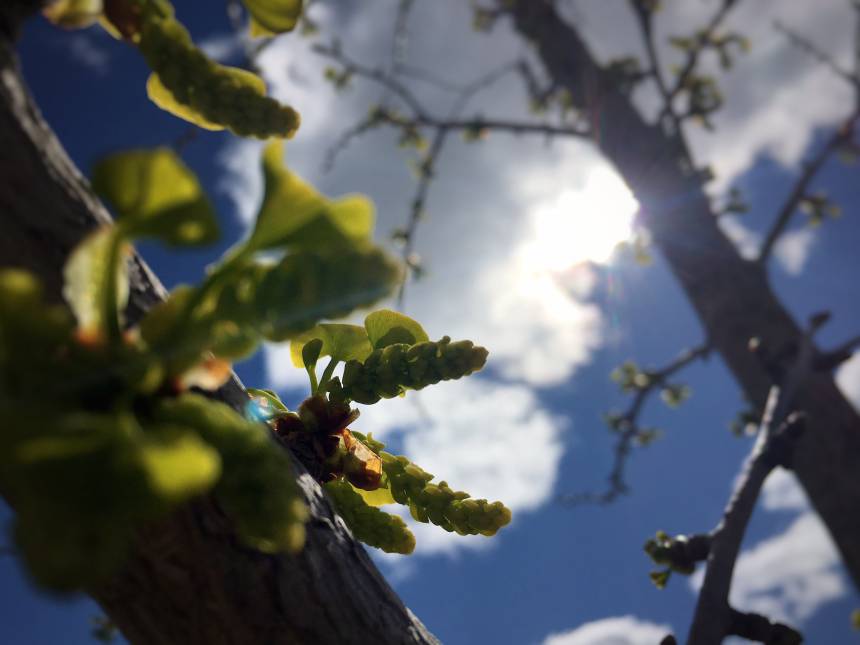 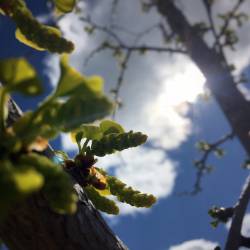 In his spare time, Calandro creates art in a variety of mediums including photography. 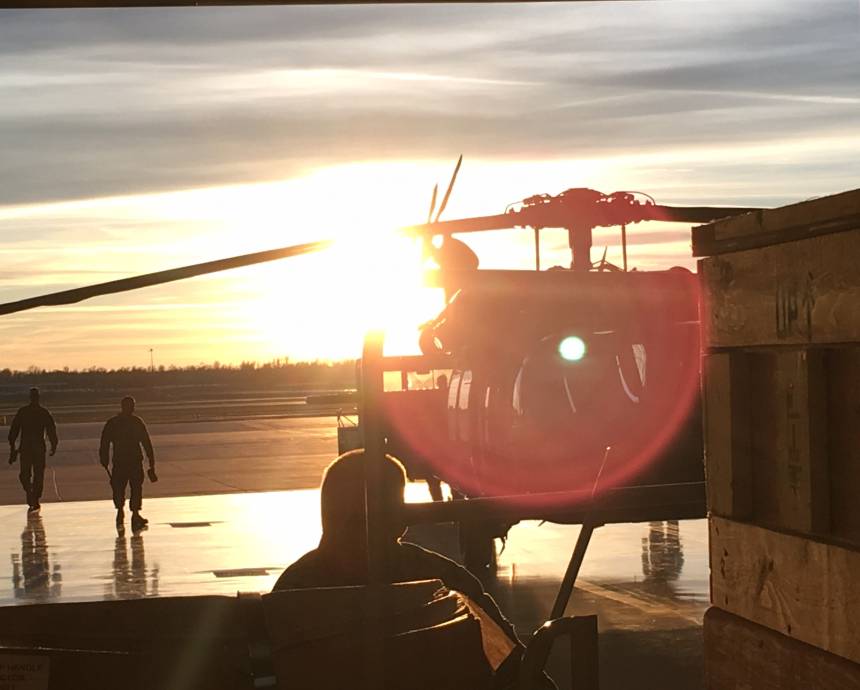 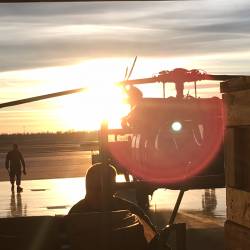 A photograph by Calandro of a helicopter at sunset. During his time in the National Guard, Calandro served as a helicopter mechanic. 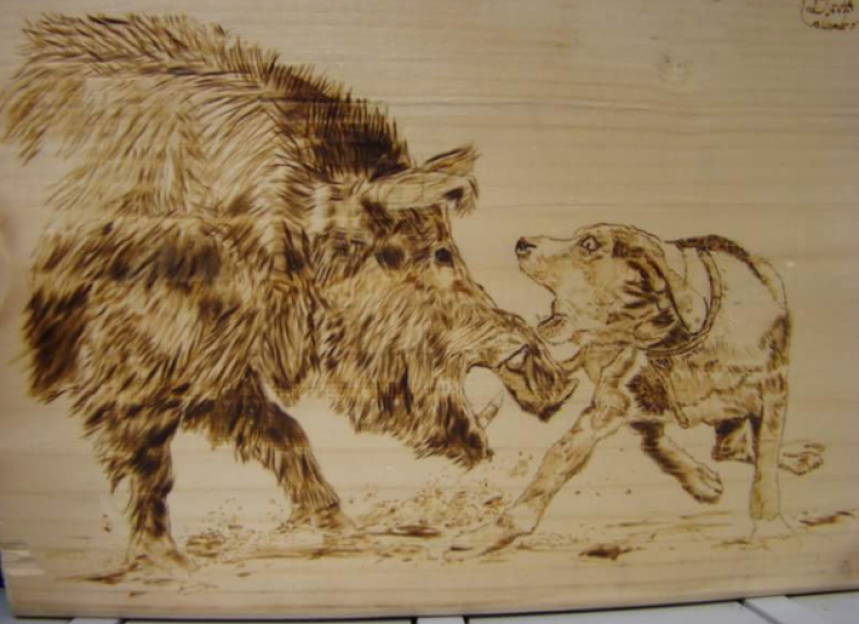 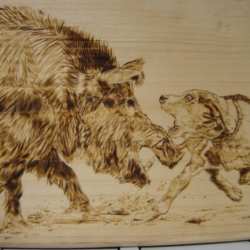 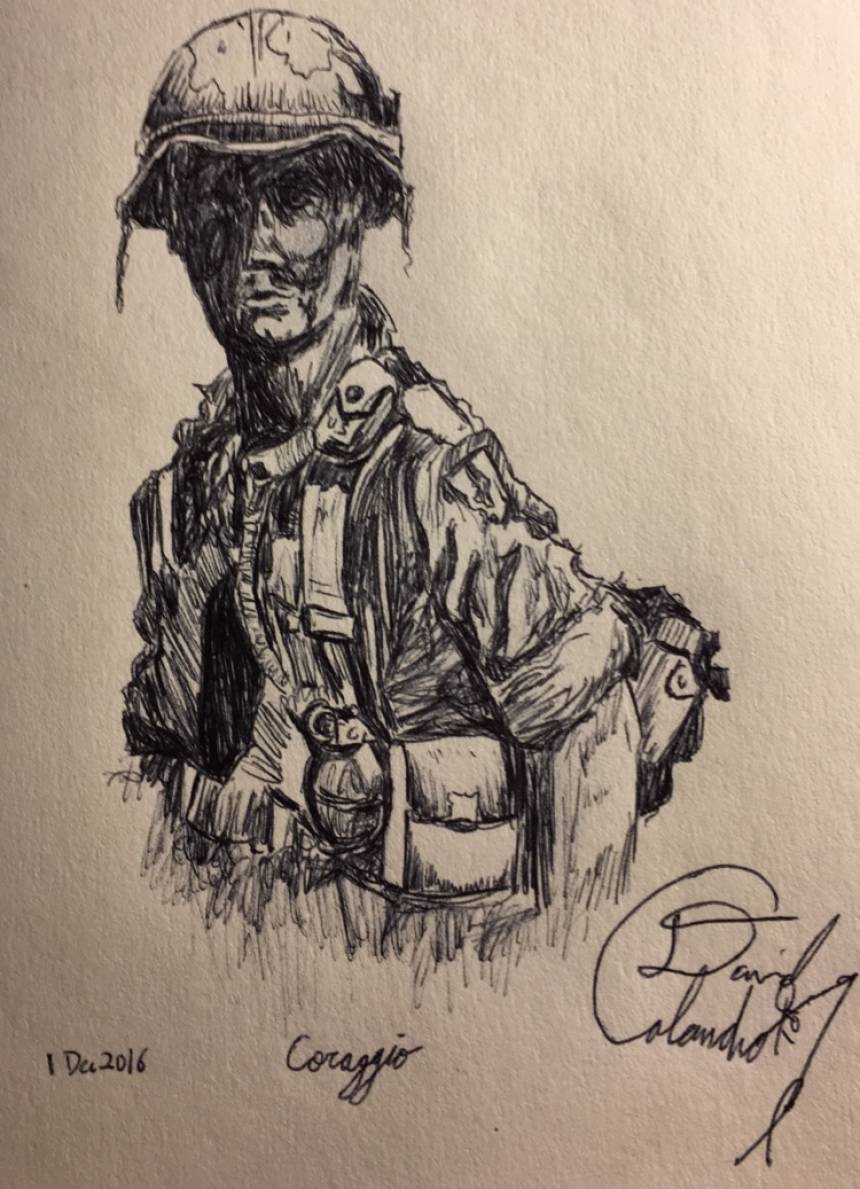 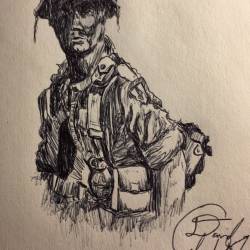 A sketch of a soldier drawn by Calandro in December of 2016. Calandro served in the National Guard from 2010-2016. 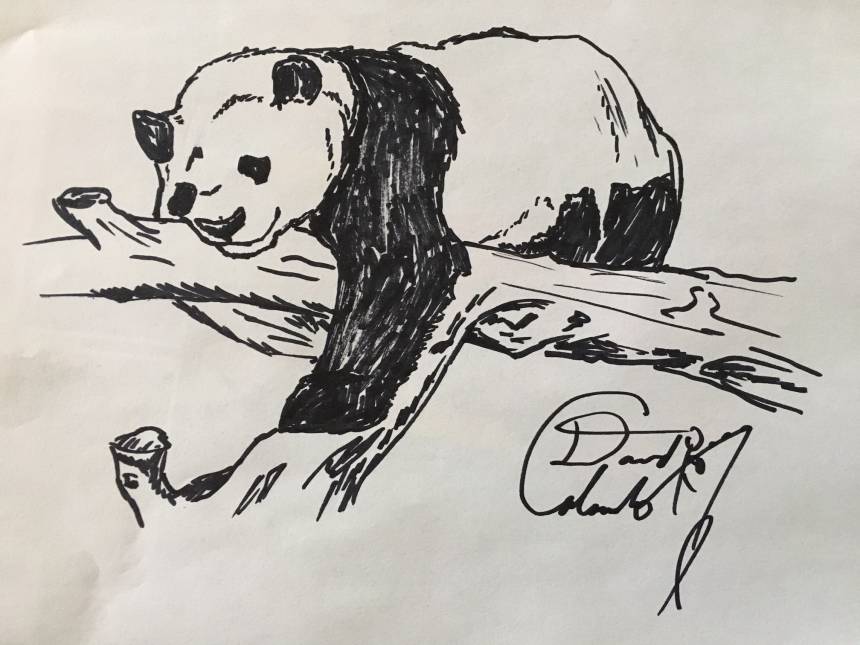 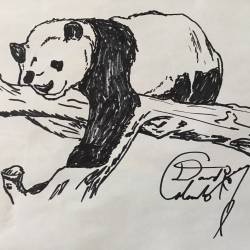 In many of Calandro's pieces, a man fishing is visible at the end of his signature. 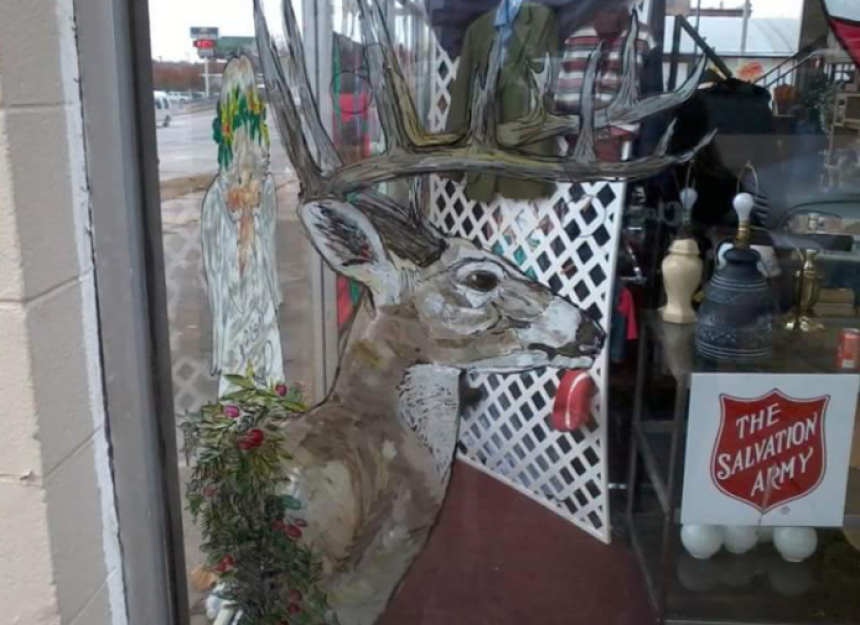 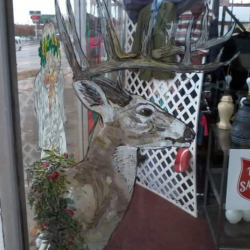 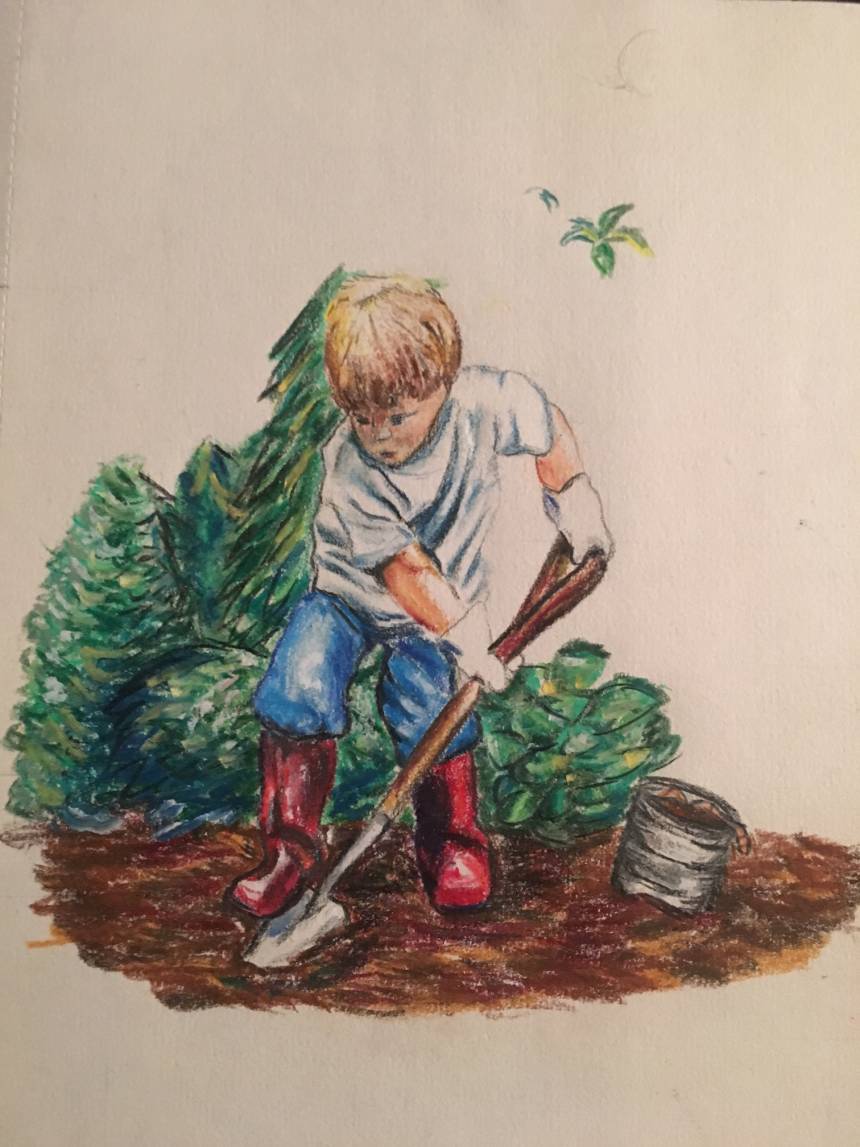 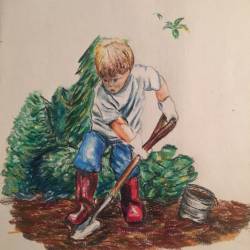 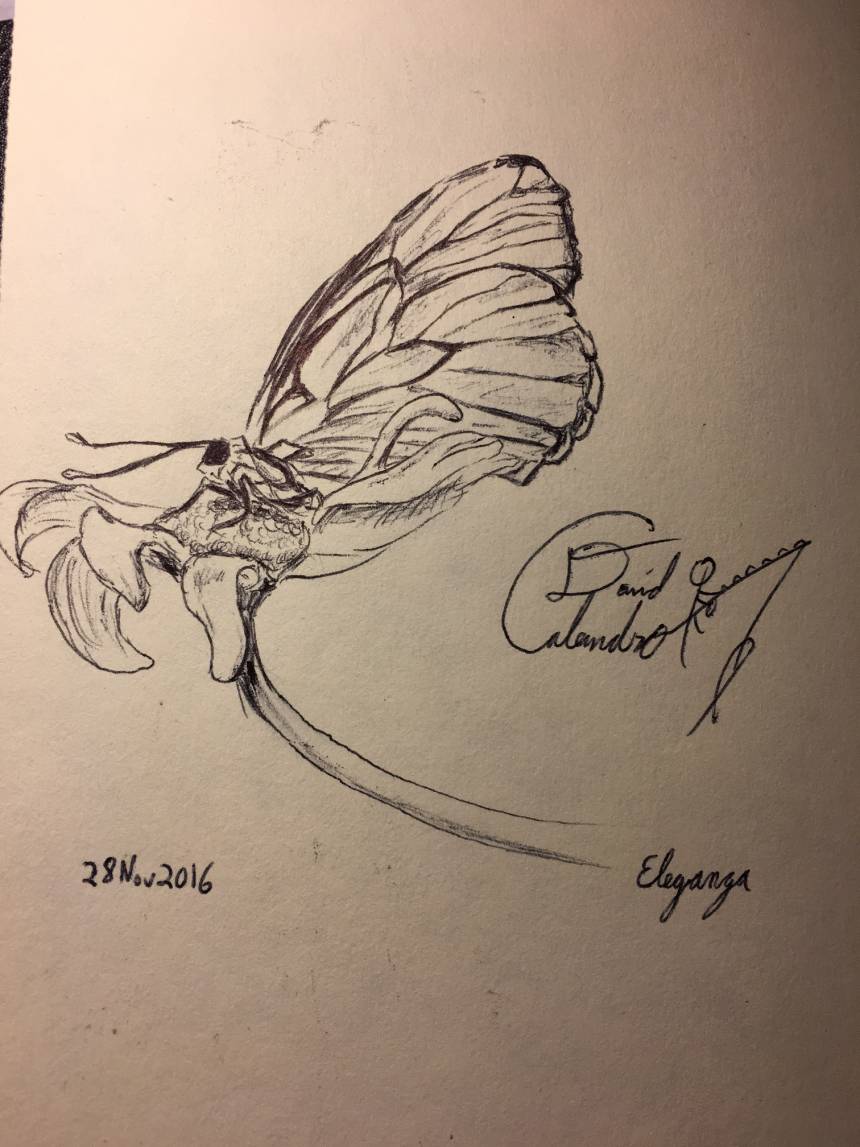 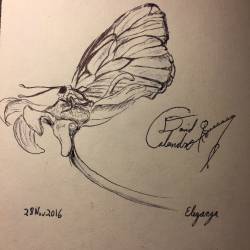 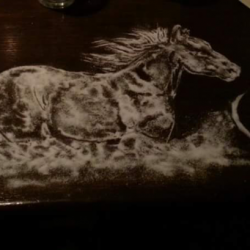 This horse was created by spreading Splenda across a tabletop using a driver’s license.