Twenty years ago, Charles Fletcher of Edgewood Dairy and Creamery attended a University of Missouri Extension grazing school. It would change the future of the family dairy operation. 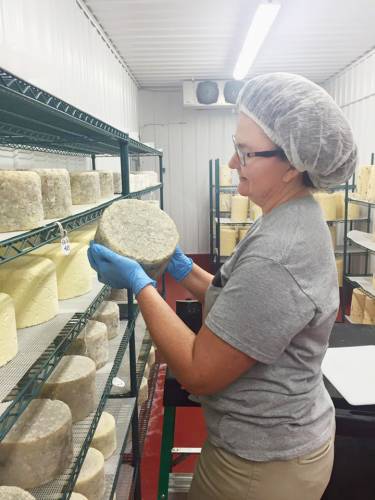 Customers can watch cheese being made through glass windows at Edgewood Creamery. The creamery uses 10 percent of the dairy’s milk.

Fletcher’s father started the dairy farm in 1966. His father milked cows by hand 365 days a year, morning and night. In 1993, the Fletcher family formed a partnership that included poultry and dairy. Rising input costs and time forced them to look at other options.

“It changed the way we dairied from that day forward,” says Fletcher. He saw the time and economic value of balanced rotational grazing systems.

The Fletchers planned their new low-input system after the school. They strung single strands of 12.5-gauge wire around paddocks to give cows fresh pasture each day. They installed a watering system in each paddock and followed MU nutrient management recommendations based on soil tests. The system went into place in 1998 with Hamilton and other MU Extension specialists offering help along the way.

Although milk production did not increase, profits did. Fletcher saw an immediate impact on veterinary, grain and labor costs. Grain costs dropped by half or more. The Fletchers also had more family time despite growing the operation.

Business grew enough that they bought more farmland in 2001 and 2004. They now have more than 300 cows. They changed the partnership in 2008 and added a creamery and store in 2015.

The Fletchers switched from Holstein to Holstein-Jersey crossbred cows in 2003 to reduce the size of the cow, increase components and improve reproductive efficiency. Smaller-framed cows do better on grazing systems. At the time, they were a “seasonal” operation, with all cows freshened through February and March and dried off in December. This gave a “vacation” for both the cows and the Fletchers.

They have now switched to a Holstein-Friesian cross known for its efficient use of grass. The herd now includes Holstein, New Zealand Friesian, Jersey, Swedish Red and Normande crossbreed cows.

They use synchronized artificial insemination (AI) breeding methods taught by MU Extension and keep about 100 replacement heifers each year. The Journal of Dairy Science published results of their synchronization trials with MU.

They now have two calving seasons because of the recently built creamery. They calve most of the cows in February and March. This allows the cows’ dry matter intake to match the natural forage growth cycle. Calving some cows in the fall meets the needs of the creamery. Reproductive trials and demonstrations continue on Charles’ farm. They use a new heat detection device, FlashMate, which flashes when a cow is at the best time to breed.

They use timed breeding to breed all cows in one day. Cows and heifers are inseminated with gender-selected semen to ensure the majority of all replacement heifers are born at the start of calving season. 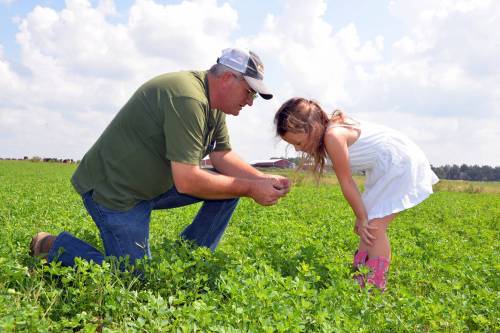 Charles Fletcher shows his granddaughter one of the tricks of the trade of successful dairy farming — good forage.

Hereford semen is used after the initial timed breeding to increase the value of calves to be sold. Beef-dairy calves are worth nearly double straight dairy bull calves in recent markets. MU Extension veterinarian Scott Poock keeps them current on new breeding trends.

There are 52 paddocks on more than 280 acres of grass. Cows move to fresh paddocks every 12 hours after milking. This boosts grass regrowth and improves nutrition for the cows. Cows go to the feed instead of off-farm feed coming to them, says Hamilton.

The Fletchers established novel-endophyte tall fescue and perennial ryegrass. Perennial ryegrass has not persisted as well on their farm and now they are trying some new varieties of orchard grass.

Alfalfa grows on 15 percent of the farm. They graze alfalfa at one-tenth bloom to avoid bloat. They also pull cows from wet alfalfa fields to prevent hoof damage to the alfalfa crown.

The Fletchers also feed some grazing corn to cows. Planting corn on hilly Ozark terrain presents challenges, but it has its rewards when other grasses may be dormant due to summer stresses. Cows usually graze the corn before it tassels. Nutrient-rich cowpeas are added to corn in grazed forages.

After the 2012 drought, they installed a New Zealand-style spider irrigation system. They irrigate and graze alfalfa to bridge the gap of the cool grasses’ spring and fall growth. They drilled a deep well that provides water for irrigation.

They milk 320 cows, 20-22 at a time on each side, using a swing 22 New Zealand-style parlor system. Ten percent of the milk goes to the family-owned creamery and the rest goes to the Dairy Farmers of America cooperative.

Like other producers, the Fletchers face time, labor and employee-retention challenges. Sometimes “economics and lifestyle” contradict each other, Fletcher says. However, the grazing system allows them more flexibility, the greatest benefit of all. They have used MU’s grazing wedge to help schedule paddock grazing order so employees know where cows belong each day. 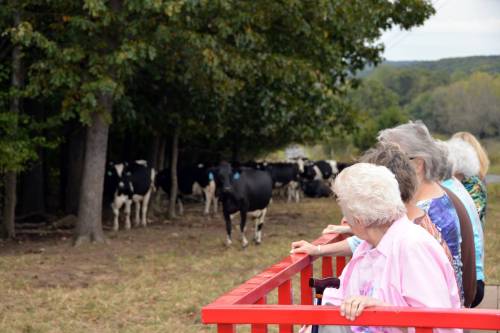 The Fletchers use forward contracting in their milk sales to mitigate risk.

“Mostly he spends time learning and thinking about how to spend as little as possible while building a risk envelope around his dairy,” says Horner.

The system is not foolproof, Fletcher says, but overall it appears to be working.

“It’s more about hitting the valley than catching the peak,” he says.

Horner and MU Extension economist Ryan Milhollin also helped in the process of deciding what type of irrigation system to use. They developed a spreadsheet that compared the investment costs of systems that would work on Ozark terrain. The New Zealand traveling spider irrigation system Fletcher chose helps to prevent losses during drought years.

Through a USDA Sustainable Agriculture Research and Education grant, Hamilton and students from MU and Missouri State University research irrigation systems’ impacts on grazing systems at the Fletcher farm as well as others.

Fletcher has been a pioneer in studying the New Zealand dairy system. He traveled to New Zealand in 2005 and New Zealand farmers have visited his farm.

“Southwest Missouri is where you go to look at grass-based dairies,” says Hamilton.

“MU Extension is a vital part of how our dairy farm has developed,” Fletcher adds. “MU Extension has affected not only dairy systems in Missouri, but the entire nation.”

Three generations of the Fletchers blend the experience and knowledge of the older generation and with new technology and research.

Charles recalls that his father was skeptical of rotational grazing, crossbreeding, AI, a new milk barn and adding crabgrass to forage. With robotics in the future, more changes lie ahead.

He reminded himself of this when his son, Tyler, brought new ideas to the farm after attending College of the Ozarks.

“It’s good to have someone with a different generation’s viewpoint,” Charles says. “The good thing about the younger generation is that they won’t let the older generation get too comfortable.” 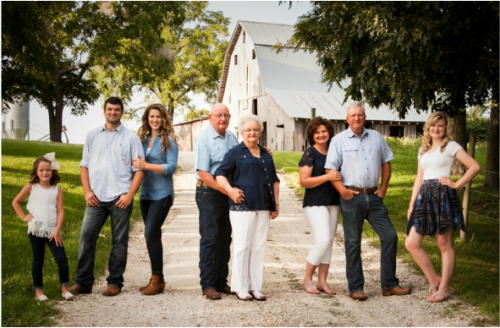 The Fletcher family thrives in the dairy business by applying research from University of Missouri Extension. Photo courtesy of Audrey Schlessman.

One larger change was the addition of the Edgewood Creamery. The family-owned creamery sells cheese, milk and other locally made products six days a week. From a glass window, customers can see cheese made from cream-line milk. It is pasteurized but not homogenized, so the cream rises to the top.

The Fletchers often invite the public to their dairy to promote farming. MU Extension’s Hamilton credits them with helping the public appreciate agriculture.