Bob Dixon will never forget the words from an Allied Corporation official after seeing his research for the first time.

“I’ve got money burning holes in my pockets,” the executive said. “How do we sponsor this research at the University of Missouri?”

Shortly thereafter Dixon, a soon-to-graduate master’s student in forestry in the spring of 1979, agreed to a contract with Allied, then one of the largest chemical companies in the world. At the time, the grant from Allied was one of the largest private sector endowments ever received by Mizzou.

“That was a formative experience in my career,” Dixon says. “I quickly discovered that our research work had some value.” 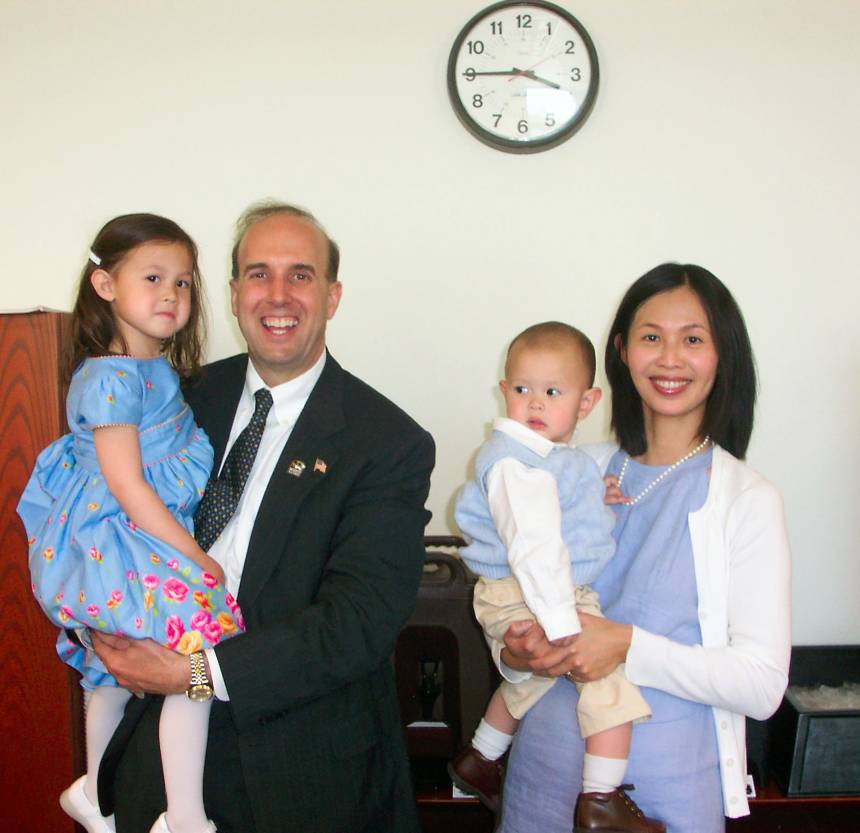 The Dixon family in 2006 during Bob’s time as an Executive-in-Residence. Photo courtesy of the CAFNR Office of Advancement.

Dixon, a Missouri native from Lee’s Summit, went on to earn his doctoral degree in forestry under with his longtime friend and advisor, Gene Garrett, and other researchers at the School of Natural Resources and the College of Agriculture.

“I have followed Bob’s career and it is certainly no surprise to me that he has been very successful everywhere he goes,” says Garrett, who is now a professor emeritus in SNR. “Along with his natural abilities, he has an excellent work ethic.”

On his way to finishing his third degree from MU in forestry (B.S. ’77, M.S. ’79 and Ph.D. ’82) Dixon would go on to author two patents relating to fertilizer formulation and application techniques that would provide a financial boon to Allied, who also paid him a salary as a student. His life would never been the same.

“I did not have a typical graduate education,” says Dixon, who also identified Dale Blevins, professor emeritus in the Division of Plant Sciences, as another major influence on his research and graduate education at MU. “I think that experience probably help set the table and whet my appetite for a future career in the private sector and in government. The early entrepreneurial experience at Mizzou really teed that up.”

These days, Dixon works as the director of the Office of Strategic Programs for the U.S. Department of Energy (DOE) in Washington, D.C., a position he has held since the fall of 2015. In his 29 years of public service he has worked for four different federal agencies (Environmental Protection Agency, Department of State, U.S. Agency for International Development and the DOE). He currently leads a $100 million dollar portfolio in strategic analysis, communications, stakeholder engagement, legislative affairs, international activities and other endeavors.

Dixon is one of the world’s leading experts on climate change and laid the foundation for the United Nations Intergovernmental Panel on Climate Change (IPCC). In 2007, he was a co-recipient of the Nobel Peace Prize with fellow members of the IPCC and former Vice President Al Gore. Tony Lupo, professor of atmospheric science, was also a member of IPCC team that received the prize.

“My tact is to help whoever is in charge to get the job done,” he says of his agency’s new administration, led by newly appointed Secretary of Energy Rick Perry. “As a senior executive, I’m happy to do that. In my mind, change almost always represents opportunity to improve.”

When Dixon recalls his time spent at MU, he reflects on the time that he would spend running the perimeter of the A.L. Gustin Golf Course – albeit with an annual permission from the course’s manager. He was often joined by others from the MU campus who enjoyed running the course’s rolling hills – as one of the few places of its kind before the establishment of Columbia’s current trail system.

“I always enjoyed that peaceful experience because I could clear my head and do some of my best creative thinking,” Dixon says of his regular runs.

Similar to the freedom he enjoyed at Gustin, Dixon credits the training he received at MU in the basic sciences – in particular in chemistry and physics – for allowing him “to pivot and move out of academia and into government, the private sector and international institutions throughout the course of my career.”

In 2006, Dixon took part in CAFNR’s Executive-in-Residence program, during which he gave multiple lectures and spent time interacting with faculty, staff and students.

“The lasting memory for me was an opportunity to give back to Mizzou,” says Dixon, who currently teaches two classes on energy policy and also gives lectures at other institutions such as American University, Georgetown University, Johns Hopkins University and Columbia University.

When he arrived at MU for the EIR program, he brought with him his wife, Anita, and two small children, Caitlin and Colin, from their home in Fairfax County in northern Virginia. It was one of several trips Dixon’s children have made to Columbia. Colin, who is now 12, has become a regular at the summer basketball camp put on by former MU standout (and current NBA player) DeMarre Carroll.

Caitlin, now age 14, is a fan of MU’s gymnastics team – and an Olympic hopeful in gymnastics herself. In fact, with her parent’s help, Caitlin has been competing in events all over the country in the hopes of making the U.S. women’s national gymnastics team. “It would be wonderful to see her be a part of the Mizzou gymnastics team,” says Dixon.

The call that changed it all

After finishing his Ph.D. in 1982, Dixon accepted an assistant professor position at the University of Minnesota Twin Cities, where he would move up to a full professor in four years. It was there when in 1985 another formative event occurred: a phone call from then-President Ronald Reagan’s science advisor, asking him to come to Washington to help write the new rules for a new generation of biotechnology research and development procedures.

“Biotechnology rolls off your tongue now and is a big part of Mizzou and other land-grant institutions, but at the time it wasn’t. It was a very new field of science,” Dixon says. ”That was my first real introduction into Washington politics.” 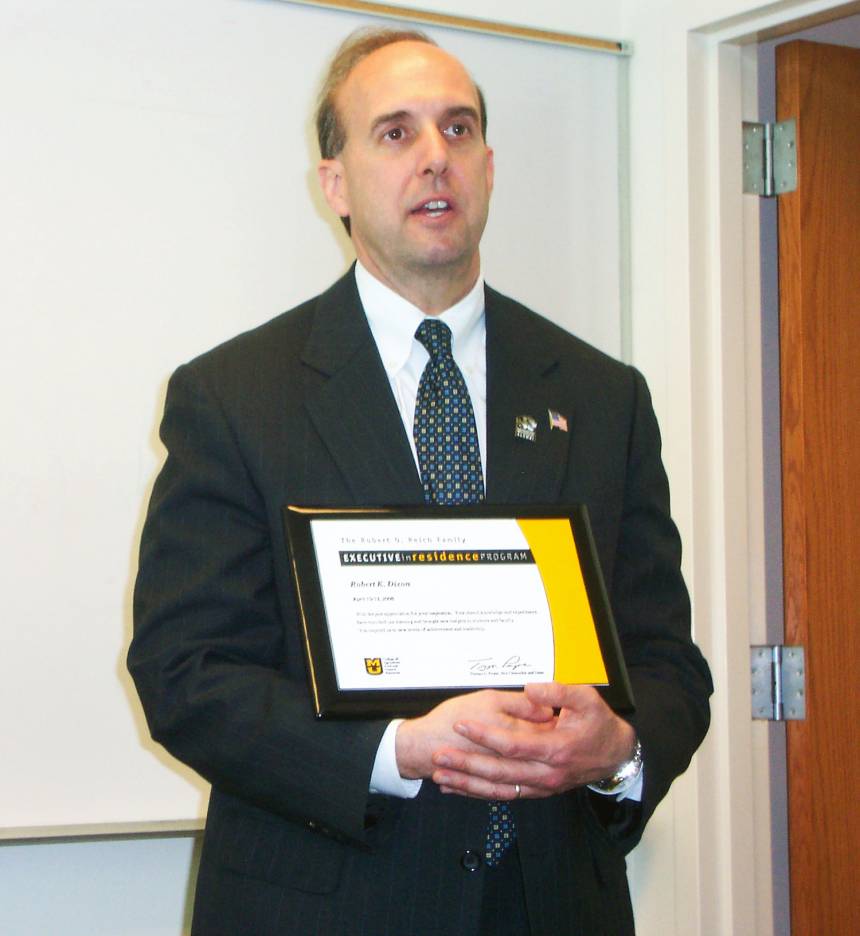 Bob Dixon addresses the room after receiving a certificate for being an Executive-in-Residence in 2006.

It would be the first of many exciting assignments, some of which would take him all across the globe as the diplomatic variety. A year later he would take a sabbatical to lead energy and natural resource sector policy reforms in southern Asia as a representative of USAID.

Building on those experiences, Dixon went on to accept senior diplomatic assignments in Brazil, Egypt, France, Germany, Ghana, Haiti, India, Japan, Pakistan, Philippines the Soviet Union and Thailand. He also served as a senior official at The World Bank Group and the International Energy Agency.

Although he has received many accolades during his career, Dixon still has not fully wrapped his mind around being a co-recipient of the Nobel Peace Prize a decade ago.

“I think it’s fair to say I’m still digesting it 10 years later. It was quite an honor. It was a seminal moment in my career,” Dixon says. “That was definitely a different inflection point for me. It was not something I had planned to achieve.”

Dixon added that when he looks at the prize, he cannot help but feel the “mantle of responsibility” that accompanies such an honor – and think back to where it all started.

“I’m an ‘aw shucks’ Show Me State guy,” Dixon says. “When you grow up where I did, starving and scratching your way through school… You try to build yourself a better life and good things can happen on the global journey.”

Which leads right into his advice for today’s Mizzou students: “Remember your roots, but aim high.”