Jefferson Farm and Garden and the Columbia FFA chapter have… Expand ▸

For several years, the Columbia FFA chapter has partnered with local landowners and entities to provide a space for student projects.

The goal of these partnerships is to provide an area for students to raise livestock. These students may not have enough room at their homes to have a full-scale livestock operation.

“We’re very appreciative of the partnerships we’ve had,” said Kevin Duncan, one of six advisors for the Columbia FFA chapter. “We’ve outgrown most of these locations a little bit, though.” 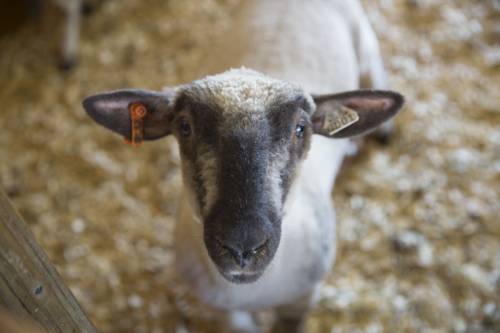 The Columbia FFA chapter has eight lambs at Jefferson Farm and Garden. The two are working together to help students with their FFA projects.

Duncan, vocational agriculture teacher at the Columbia Area Career Center, had been scouting out a new location for the past two years, and one farm was on his radar during that entire time – Jefferson Farm and Garden.

“Jefferson Farm and Garden has always seemed like an ideal spot,” Duncan said.

Some of Duncan’s students got a taste of what Jefferson has to offer during the annual South Farm Showcase event hosted by the South Farm Research Center. Jefferson Farm and Garden had its grand opening the same day as the 2016 Showcase – and opened its doors for a variety of activities.

“I didn’t even realize that we had kids with livestock at the Showcase,” Duncan said. “I just heard some great reports from the kids.”

“It’s really a win-win situation for everybody,” Dooley said. “We love having more livestock onsite, as guests who visit are always interested in learning more about the animals on our property. They are great from an education standpoint. For the students, we’re happy to provide an area where they can learn more about caring for livestock and complete their FFA projects.”

The lambs arrived at Jefferson in the middle of May. Dooley said they had to do a little maintenance work to their stalls, but the new group fits right in with Jefferson’s mission.

“We originally had four-rail white vinyl fencing in those stalls,” Dooley said. “They would have been extremely easy to crawl under. We added outdoor cattle panels so the lambs wouldn’t be able to escape. We also added some stall mats and made sure our auto-water system was ready.” 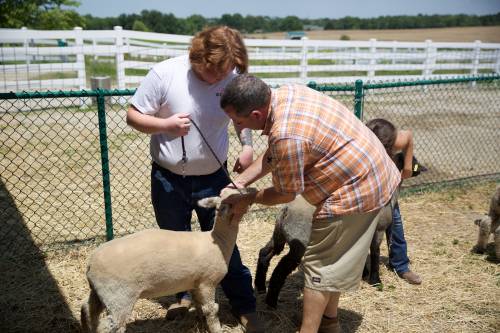 The eight lambs are cared for by seven students. One student cares for two of the lambs. There are students from all three Columbia high schools involved at Jefferson.

The lambs were sheered before being brought to Jefferson. Students are currently conducting normal care for the animals. They are teaching the lambs to lead and walk, too, as the group of lambs will be shown at the Boone County fair later this year.

“Using this location has allowed us to put together higher-quality projects,” Duncan said.

The students are also grooming the lambs, keeping their coats as clean as possible.

“This is a great opportunity for us as we look for ways to partner with the community in their agricultural pursuits,” Dooley said.

The Columbia FFA chapter is made up of all three high schools in Columbia – Rock Bridge, Hickman and Battle. Hickman actually began the chapter in the 1940s, with Rock Bridge joining later. Battle students jumped on board when the school opened in 2013.

The chapter has six instructors and 160 members.

“The kids are excited to have this opportunity at Jefferson,” Duncan said. “We’re hoping it’s a partnership that we can build on and continue.”

Jefferson Farm and Garden is part of the University of Missouri College of Agriculture, Food and Natural Resources’ Agricultural Research Centers. Jefferson is a 67-acre educational farm designed to engage the community in experiences about food and agriculture.