It was 25 years ago when Pat Guinan, with the help of the University of Missouri’s Extension Commercial Agriculture Program, established the first of a small network of automated weather stations in northwest Missouri.

The network, known as the Missouri Mesonet, now includes 34 weather stations – 24 of which provide real-time weather updates. The network covers 24 counties in Missouri.

The MU College of Agriculture, Food and Natural Resources’ Agricultural Research Centers have benefited from the Missouri Mesonet, as several of the weather stations are located on Research Center properties. 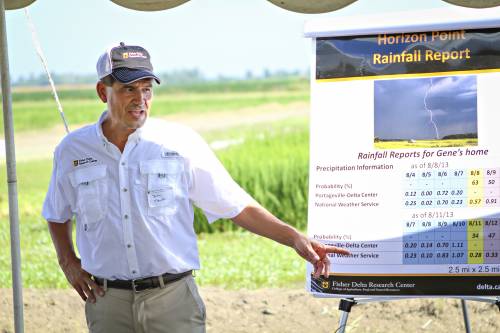 “The real-time weather station at Hundley-Whaley is invaluable to the Research Center as well as the local community,” said Bruce Burdick, Hundley-Whaley superintendent. “Local farmers and radio stations rely on it to provide up-to-date information on up-to-the-minute soil and air temperatures to help plan their work schedules. Many check it several times throughout the day.”

Guinan has worked with John Travlos, AgEBB system administrator, Division of Applied Social Sciences, since the first weather station was established. Travlos and Guinan co-manage the network, as the AgEBB staff provides vital contributions to the operating, maintaining and sustaining of the network.

The network has undergone various changes throughout the years, the most recent of which includes updates to the Missouri Mesonet website, which happened at the end of April.

“The network has become an important economical and environmental data resource for Missourians, and others, and using this information can increase efficiency which translates to statewide savings each year.”

“In the spring, I always get responses from area farmers anxious to plant corn – they monitor our soil temperature data daily in order to determine when the temperature is right to plant,” said Dave Davis, Forage Systems Research Center superintendent. “Local co-ops also monitor the data for similar purposes. 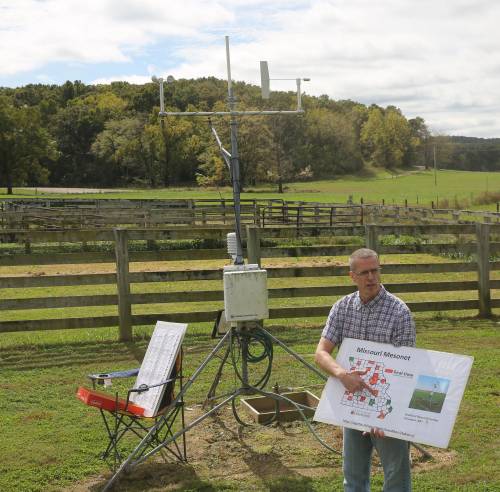 Pat Guinan travels throughout the state each year to educate local landowners and producers about the Missouri Mesonet.

“Some farmers travel long distances in order to farm. Many of these farmers check our station for rainfall in order to determine if field conditions are conducive to doing field work prior to moving equipment into our area.”

Whether farmers and landowners are spraying or conducting controlled burning, up-to-the-minute weather reporting is vital to their operations.

The Missouri Mesonet has a far reach that often extends outside of the agricultural bubble.

“In 2016, the total number of actual internet visits made to our 24 real-time weather websites was more than 8 million,” Guinan said. “In hindsight, the Missouri Mesonet has not only been successful in the agricultural realm, but its application has transcended numerous other vocations and interests. In addition to agriculture, the network has provided information for national, state, and local agencies, utility companies, insurance companies, law firms, building contractors, engineers, environmental impact assessments, risk assessments, university research and extension, K-12 education, media and the general public.

“There’s a public safety component in providing real-time weather conditions,” Guinan said. “All of our data is sent to the weather forecast service offices and the NWS, and they use that information for doing their surface analysis and for looking at serve weather criteria. If you have a thunderstorm event where you get a 60-mile-per-hour wind speed, the weather service will see that and can use that information to issue a severe thunderstorm warning.”

All of the data is archived as well and is available on an online database, going back to 2000. The long-term data is also valuable for farmers and landowners.

“All of this data can go into crop models, insect models or disease models,” Guinan said. “There is a lot of value in real-time data. Having a long period of recorded weather is just as valuable because you get a climatology of the area. You get an idea of what’s extreme and what’s average. You can use that information to look at the trends that we see from decade to decade.”

Guinan said he would love to have weather stations in every county, however, it takes money and manpower to run the stations.

Guinan visits each of his stations at least three to four times a year to perform general maintenance as well as replace anything that is damaged. Birds, mice and other pests can cause problems. Strong winds or lightning can also be a hazard.

“A lot of people think you just set up a weather station and walk away,” Guinan said. “You have to take care of that station. Over time, it takes a handful of site visits a year just to make sure everything works properly. I could go on and on about the problems that I’ve seen – bad sensors, parts being burned after getting hit by lightning, mice chewing through wires. It’s really crazy what can happen to a weather station.”