Growing up in southwestern Indiana, one of Maria Haag’s favorite pastimes was showing small animals like pigs, goats and rabbits – not cattle – at national events.

These days, though, Haag is on the forefront of developing a modern version of what has been known for decades as a “cowgame simulator” to help students in animal breeding classes – both at the high school and undergraduate levels — to understand the intricacies involved with traits and characteristics when it comes to breeding cattle.

“From a faculty perspective, our purpose is to illustrate the principles that are used in making those selection decisions and how they can influence how much progress the student can make,” says Bill Lamberson, interim director of the Division of Animal Sciences who also serves as advisor of Haag, who has been working on her Ph.D. in his laboratory since 2015.

‘Fantasy football with a herd of cows’

Lamberson, who calls the simulator “fantasy football with a herd of cows,” played the game as an undergraduate at the University of Nebraska-Lincoln. In the game, each student is given a randomly generated herd. The objective is for the students to make changes in the traits of the animals by breeding the animals and seeing if the more favorable traits are more prevalent over time (one session tends to span five generations). 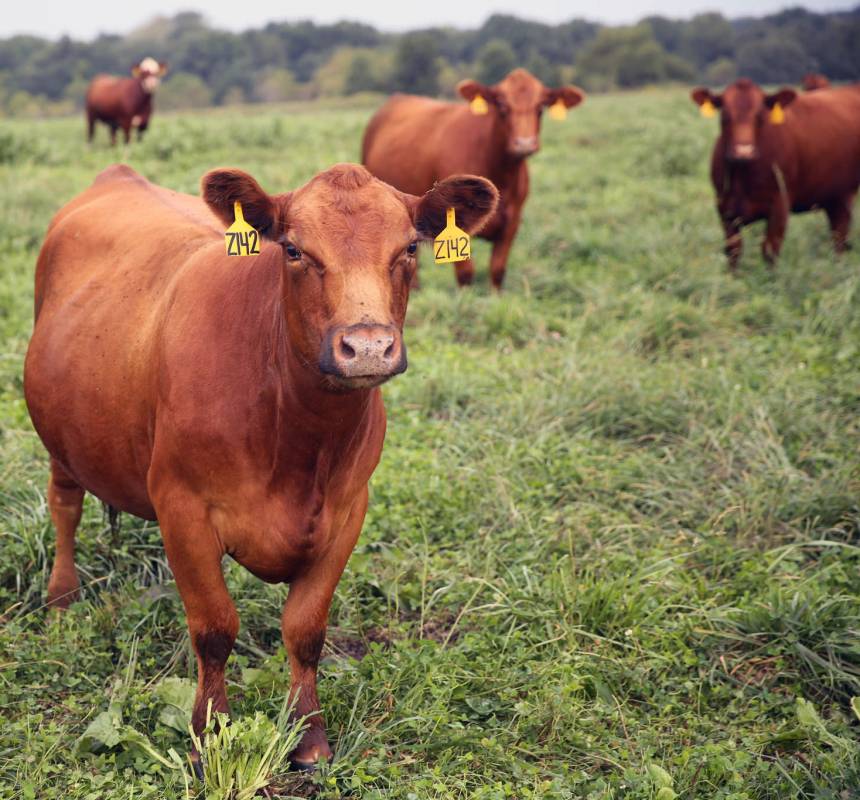 Lamberson has been part of a group of animal geneticists and cattle farmers and producers alike who have been interested in creating a new version that could run on modern computer operating systems.

“It’s one of those things that many of us who are older have used a lot in class, so we’ve had good experiences with it in illustrating these concepts,” he said.

The original version ran on IBM punch cards. The most recent version, created by Kevin Michael Kleibrink and Stephen Lukefahr at Texas A&M University-Kingsville in the mid-’90s, runs off of Visual Basic.

“It’s really cool what it does. You can visualize something that otherwise would take a lot of years,” Haag said of the previous versions. “It’s something that’s very interesting to me, but it was something that was very platform-specific and it was missing a lot of advancements that have been made recently.”

Although Haag hopes to have a prototype of the new program – which runs on JavaScript – finished by this summer, she has been conducting several questionnaires and interview sessions with potential users to go over interface designs and to get feedback on what the new version should have.

The original version focused primarily on the “statistics” – to use the fantasy football theme – of weaning weight, daily gain and yearling weight. Haag’s edition will also include birth weight, marbling characteristics and a lethal recessive trait (genetic defect).

When Haag began to think about what she would do for her dissertation, her main concern was having some connection to teaching in a classroom setting. When Lamberson took into account all of the experience she had with computer programming, taking on the cowgame simulator seemed like a perfect fit.

Coincidentally, she never really started to tinker with programming until she began working on her master’s degree in the laboratory of Jerry Taylor, Curators Distinguished Professor of Genetics and Animal Sciences.

Haag arrived on the MU campus in 2011 as a participant in the Miller Summer Research Internship program while still a student at DePauw University, double majoring in biology and political science. When she first started working with Taylor and his group, she realized how passionate she was about animal science, going back for a second summer as an intern in 2012 and eventually starting her master’s degree in the fall of 2013.

While in Taylor’s lab she began to learn the programming languages of Pearl and Python to work on programs relating to bioinformatics. Toward the end of her time in Taylor’s lab, she was asked to test out a copy number variation detection program – used to attempt to identify and quantify regions of the genome in cattle that have been repeated and thereby affect the phenotype – that was developed by Derek Bickhart at the USDA-Agricultural Research Service (ARS). The program was built using JavaScript, adding a third coding language to her repertoire before joining Lamberson’s lab in 2015 as a Ph.D. student.

As far as teaching, her love of getting students excited about learning – particularly on matters relating to agriculture – has been around ever since she took part in a week-long summer camp at Purdue University for 4-H members within the state. 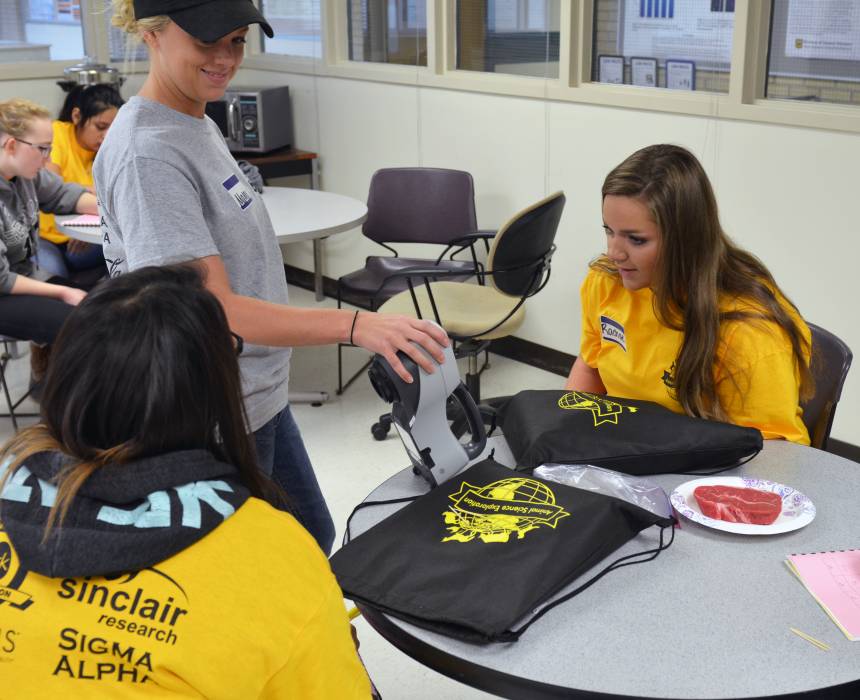 When she came to MU, she envisioned a day that was not just for 4-H members, but for all high school students – especially those from non-agriculture backgrounds, could get exposed to various aspects of the research and technology tied to the field of animal science.

Her dream turned into a reality on May 3 when approximately 30 students representing 13 schools across the state took part in the first-ever Animal Science Exploration Day. Held at the Animal Science Research Center, the event had students go to different stations related to the main aspects of animal science, including genetics, reproduction and nutrition and then listen to a panel talk about various disciplines.

“I think you can reach a lot of kids through animals and I think there are a lot of kids who are interested in animals. Obviously agriculture is an industry that is hiring a lot of people and I think it’s important that we are reaching different audiences to get potential people brought into agriculture,” Haag said. “I think making sure the kids know what can you do with a degree in animal science is imperative for the students and their parents. 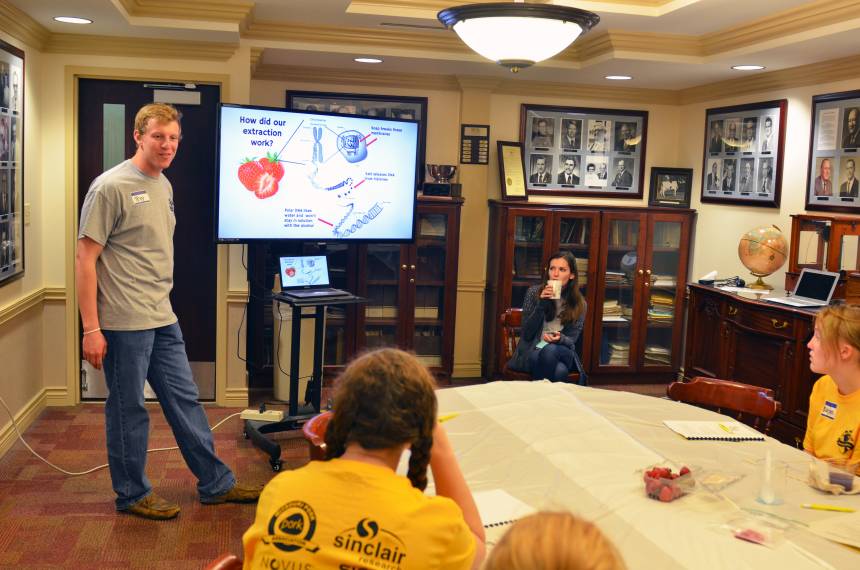 “I think it’s really important to get students on campus. I think that’s a main recruiting tool. I know that my experiences at Purdue definitely led me to wanting to do a career in animal science.”

When she finishes her studies, Haag would like to pursue a teaching or teaching/extension position at a university. She is already being recruited by educational technology companies for her coding prowess.

As if Haag did not have enough on her plate, she is also working on a second dissertation involving a study of genetic control of water consumption in mice. It is expected that mice and livestock share many of those same genes and genetic controls.

“She is a bundle of energy,” Lamberson said. “She takes on way more projects than what most students would.”

While wearing a smile on most days. She plans on finishing both of her dissertation projects either in spring or summer of 2018 – and defending both on the same day.

“It’s going to be great time,” Haag said with a grin, “and everybody should come for that defense.”