Making a boat out of cardboard and duct tape may sound like a daunting task, but every year a number of CAFNR teams take the plunge. Float Your Boat for The Food Bank, held this year on Saturday, April 22, challenges teams to build and race a cardboard boat at Bass Pro Shops Lake. The event, in its sixth year, raises money for The Food Bank for Central and Northeast Missouri — nearly $70,000 in 2017 alone!

Attendees can vote for their favorite boats with donations to The Food Bank. The team who brings in the most donations receives the People’s Choice Award. Other prizes include Best in Show, Can’t Believe It’s Cardboard, Best Use of a Theme, Spirit Award — and also the Titanic Award for Best Sinking and the Ugliest Boat (honor?!) — both of which were taken home by some of our very own CAFNR teams this year!

You can see all the photos and fun on CAFNR’s Flickr site. Below, we feature the CAFNR boats: 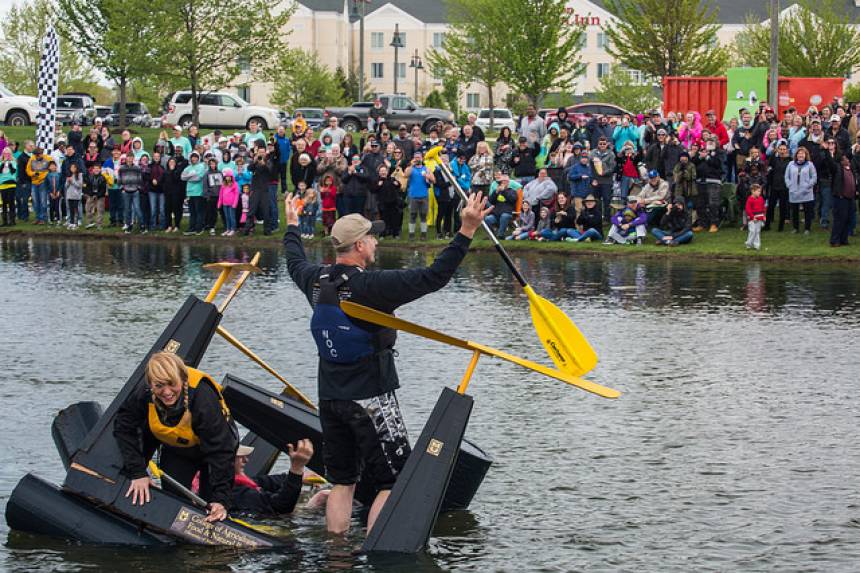 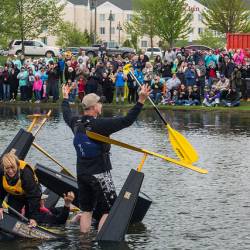 CAFNR's official boat, "Help! I'm Droning!" slowly collapsed after launch -- but that didn't stop the showmanship of the rowers, Bruce Burdick, superintendent, Hundley-Whaley Research Center; Donna Thomas, business support specialist II, field operations; and Dusty Walter, director of resource management and superintendent of Wurdack Research Center! The drone shape recognized the role that technology plays in improving agriculture and enhancing food production (also, Dusty and Bruce are both FAA-certified drone pilots!) "In spite of the seriousness of hunger across Missouri, this event emphasizes the fun associated with the spirit of giving to help others -- thus, the name -- and the likelihood that swimming may be involved with the event." Walter said they were surprised not to win the Titanic Award. "I truly thought we would make it to the finish, but I also knew we were in trouble when I noticed bubbles rising from our pontoon landing gear -- they were filling with water. Every year I feel challenged by the design and finishing the build of our boat. Every year we end up with a boat that I'm really impressed with. But, you never know how it will float until it goes on the water. That is part of the excitement!" 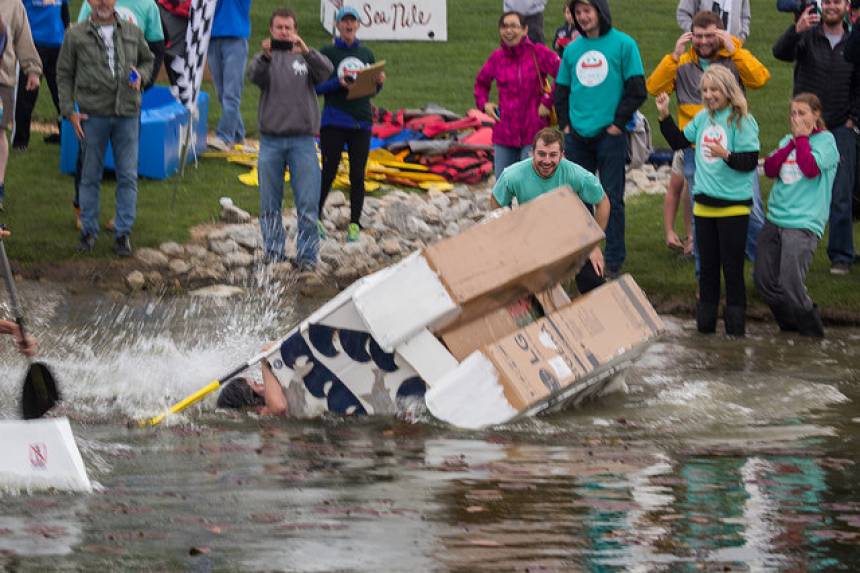 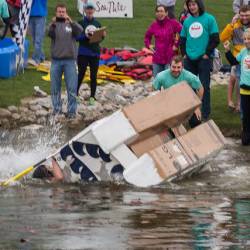 Eat Mo Carp's boat, appropriately named "Carpe Diem," helped its paddlers swim like carp -- and win the Titanic Award for Best Sinking. The team was part of a Parks, Recreation and Tourism class taught by Mark Morgan. They also sold carp as part of the food vendor options at the event. Eat Mo Carp raises awareness of the problem fish species and how nutritious, versatile and cost-effective it is to use in recipes. Morgan said even though the team didn't make it across Bass Pro Shops lake, "it was a great experience and the class really enjoyed it." Boat captains were Tristan Landers-Morris and Jacob Krell, both juniors in parks, recreation and tourism. 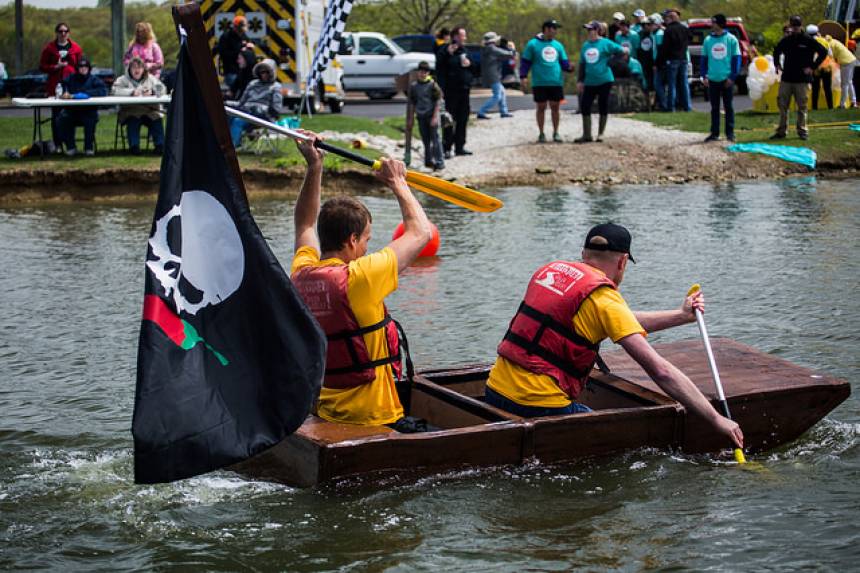 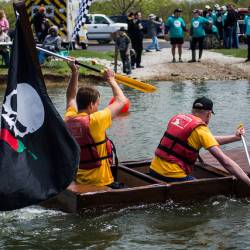 Bradford Research Center entered a boat in Float Your Boat for the first time this year. The boat's name -- and flag -- paid homage to the hottest pepper in the world -- the "Carolina Reaper." The Carolina Reaper will be featured at this year's Bradford Tomato Festival Sept. 7. Andrew Biggs, Bradford superintendent and boat captain, said they did not expect to even make it across the lake, let alone so quickly (the Bradford boat clocked in under 2 minutes). "Float Your Boat was a lot of fun -- so much fun that we saved our boat and may end up using it again next year -- or make a new one," Biggs said. Josh Reinbott, farm manager at Bradford, helped Andrew captain the boat. 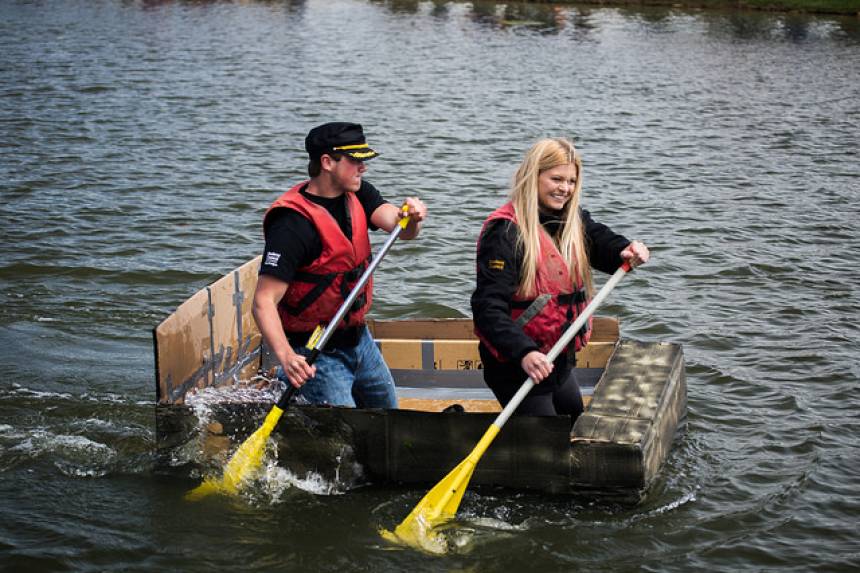 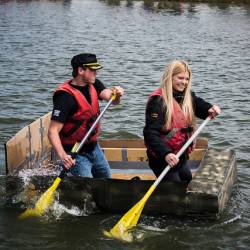 CAFNR Student Council's "Boats N Heifers" boat earned the dubious honor of "Ugliest Boat" at this year's Float Your Boat for The Food Bank competition. Sophomore Ethan Hodges and Junior Isabel McNeill were the brave rowers -- team captain Brandon McKnight said everyone doubted its ability to float! "Sure enough, it floated and went on to win the Ugliest Boat Award," he said. "We really enjoyed participating in Float Your Boat," he said. Their boat theme signified the importance of the cattle industry. 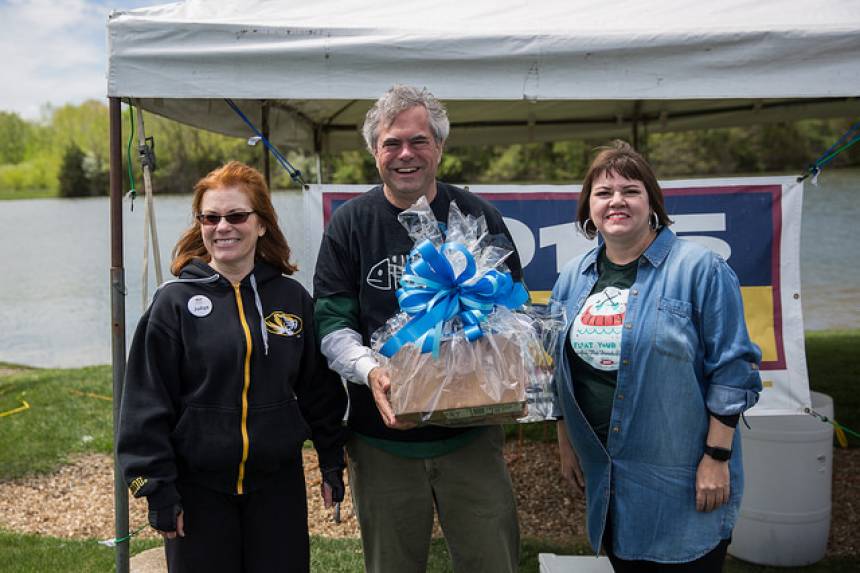 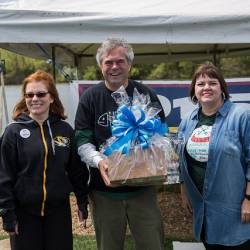 Mark Morgan, associate professor, School of Natural Resources, accepts the Titanic-themed prize for the Best Sinking at Float Your Boat, Saturday, April 22. Morgan headed up the Eat Mo Carp team (just not in the water!)