It all started with a letter, written in the late 1980s, by a handful of agriculture agents located in northwest Missouri.

The letter was addressed to then-University of Missouri College of Agriculture, Food and Natural Resources Dean Roger Mitchell and was written by Wayne Flanary, agronomy specialist; Bob Chapple, ag engineer; Mike Killingsworth, farm management specialist; and Don Mobley, livestock specialist. The focus of the letter was on the need for a research demonstration site in that corner of the state.

Mitchell was in complete support of the idea. 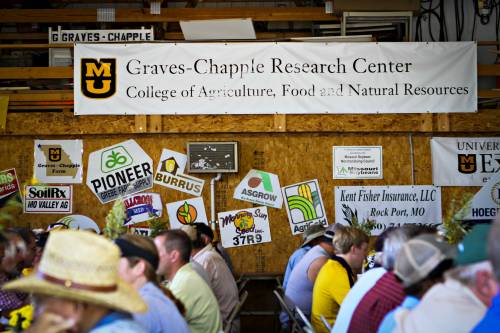 The Graves and Chapple families have been key to the development and continued excellence of the Graves-Chapple Reserach Center.

“We worked out of our pickups that first year,” Flanary said. “There were no buildings or facilities. It was just land.

“It was just neat that Dean Mitchell thought enough to approve our vision. He would come up often and sent many letters of thank you to us. He was very interactive when he was on site.”

Donald and his future wife, Marilyn, met while they were students at Rock Port High School. The two were married in the 1950s. Donald, a veteran who served in the Marine Corps, had a passion and expertise in mechanics. He served in the Korean Conflict, doing maintenance work. 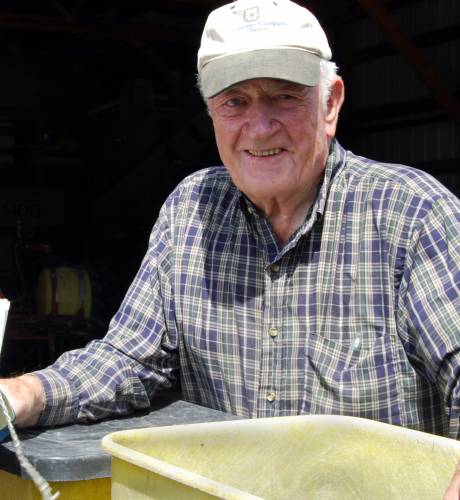 Graves started farming when he returned home, raising cattle with his brother. Graves was one of the first individuals in the area to no-till his field in the late ’70s.

“No-till was just coming onto the scene at this time,” said Phil Graves, one of Donald and Marilyn’s sons, who has continued to be a strong supporter of the Graves-Chapple Research Center over the years. “Dad was always thinking outside of the box.”

Chapple, who received a commission from the Air Force after he graduated with an agricultural engineering degree, learned to fly fighter jets in the three years following the Korean War. He started his career in ag as an MU Extension agent in Unionville before moving to northwest Missouri.

Chapple was a fan of no-till farming as well. No-till soon became the focus of the research at the Graves Farm – its presence in the background of nearly all projects.

“The farm started with no-till,” Flanary said. “Bob’s forte were the erosion plots. He really made no-till stick in this area. I really believe landowners still practice no-till because of his work and this farm.”

Chapple’s name was added to the Graves Farm in 2003, creating the current moniker – Graves-Chapple Research Center. It was a well-deserved honor for Bob and his wife Marilyn.

“The Graves family really wanted the Chapple name added to the farm,” said current superintendent Jim Crawford. “We all thought it was a great idea. We were actually able to keep it a secret from him before we announced it. He was definitely shocked.”

The Graves and Chapple families both played big roles when the Graves Farm unveiled its first field day a couple years after its installation. Guests loaded on to two wagons and learned more about the research being conducted at the farm.

“It was pretty simple,” Phil Graves said. “We served pulled pork and chips and had a good time.”

“We were always proud how the commercial producers participated,” Flanary added. “There was such a respect in the community. My kicks have always come from working with local producers. That’s the fun part for me.” 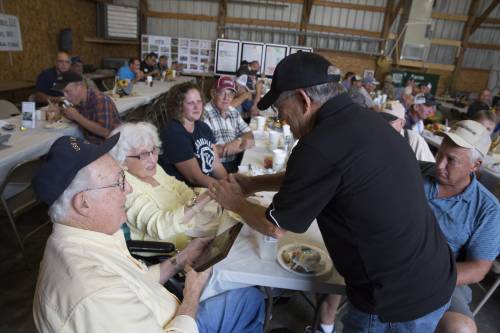 Like now, the field day at the farm was focused on educating landowners in the area on timely topics. The day included several presentations and hands-on activities.

“Bob always had the needs of the farmers on his mind,” Graves said. “He wanted to keep farmers in the loop. Anytime there were big changes, Bob let landowners know.”

Marilyn Graves and Marilyn Chapple always played a key role in the field day preparations as well. They helped prepare the meals and kept things in check.

“My mom and Ms. Chapple were always in the background keeping things in line,” Phil Graves said. “They did whatever needed to be done.”

“Marilyn has been tremendous ambassador for this place,” Crawford said. “Everyone knows her and respects her. She’s here at every field day. She really is the hostess for the site. We’re always happy to see her here. She would bring cookies or pie while we were in the field quite a bit, and everything would stop when she showed up. With her son, Phil, too, you couldn’t ask for a better supporter. They’ve been great. 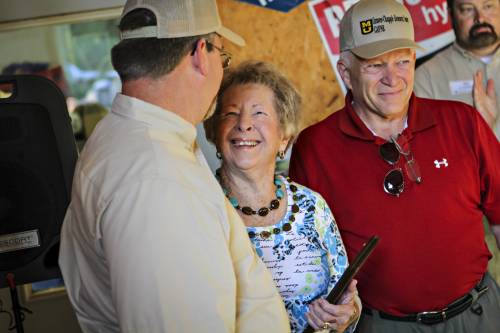 “The Chapple family, they have been important to what we do and great to work with as well. Bob had a calling and love for what he did at the farm. That love was unmatched. Everybody trusted what he said.”

Along with the Graves and Chapple families, Flanary has played a key role in the development of the Graves-Chapple Research Center. Flanary worked as an MU Extension agent from 1983-1993 and returned in 2004. Along with being a part of the creation of the farm, Flanary plays a big role in the annual field days.

“Wayne has put a lot of sweat equity into this place,” Crawford said. “After he moved to private industry for a time, we were happy to get him back. I was still new when he returned, and he was instrumental in filling in gaps and bringing back trust, as well as conducting top-notch research.”

The University of Missouri bought the original 18 acres that the farm sat on. The rest of the land that Graves-Chapple conducts research on is rented from area landowners. With a focus on helping individuals in the region, the Bob Chapple Memorial Fund in Support of the Graves-Chapple Research Center offers those individuals an opportunity to support the Center in its projects.

“I was handed the reins of something great,” Crawford said. “Donald, Bob and the rest of the group put a lot of work into making this Center an outstanding tool for local landowners. Our research will always be focused on what the producers want. It’s a tribute to those guys as well.”