He recalls the days of working as a front desk manager at the Muehlbach Hotel in Kansas City, Missouri, checking in guests and hanging out with names like Bob Hope, Mickey Mantle and the stars of the New York Yankees and even former President Harry Truman.

He thinks back on the days of going through a food and beverage training program with Marriott and trying his hand as an ice sculptor – chainsaw and all. 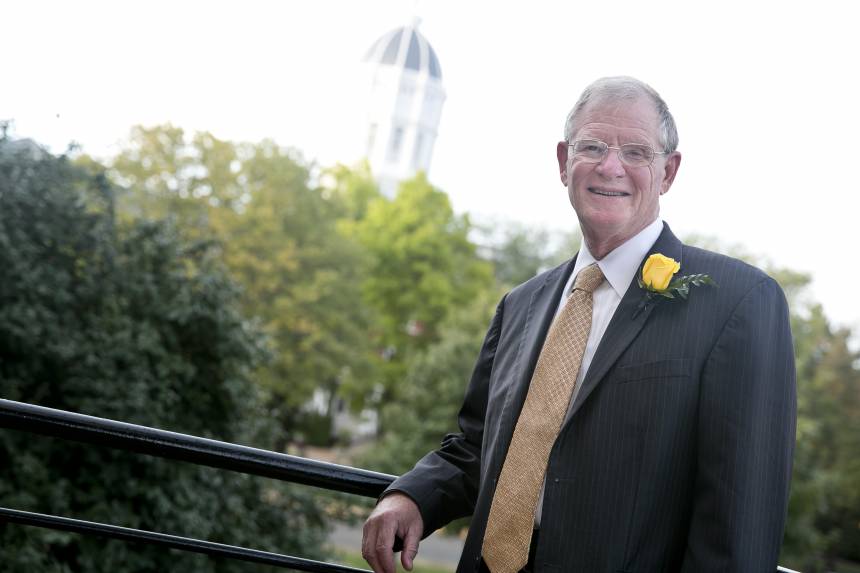 Denny says the hospitality industry has changed since those days, but it’s still an industry that he, and now his family, cannot live without. The love for the industry, he says, is what keeps him active and enjoying every day. Retirement is not in the picture.

“I wouldn’t know what to do if I wasn’t doing something that I enjoy doing,” Denny says. “This is something that you really look forward to everyday because you do something different every day.”

It certainly does not hurt that his son, Dennis Bond Jr. (B.S. ’93), and granddaughter, Morgan Bond, have traced his footsteps and, after 11 years of Denny living in Louisiana, they are saving a spot for him back home in Columbia.

When Denny started at the University of Missouri in the mid-’60s, the Department of Hospitality Management was nonexistent. It wouldn’t have mattered though, since his eyes were set on becoming a high school principal. While working through his three degrees (bachelor’s of mathematics, bachelor’s of education and master’s of education) he was also in the university Army ROTC earning his way to Second Lieutenant. Upon graduation, Denny and his family began moving. Their first stop was Fort Sill, Oklahoma, for artillery school followed by Denny spending 11 months and two days in Vietnam.

Once he returned to the country, there were interviews with a few high schools in Kansas City, but nothing that really struck a chord. Denny met with a manager at the Muehlebach Hotel who was looking for hard workers willing to try their hand in the hospitality industry. Denny soon found himself as the sales manager of the hotel. With his mind on working his way back home to St. Louis, Denny accepted a position as the director of sales at the Ramada Inn Hotel in Jefferson City before landing at the St. Louis Marriott Airport Hotel.

Denny said the Marriott mission was clear: “To make sure we were doing better than the competition – and we always did.”

Over the next 20 years, Marriott sent Denny to Philadelphia, Washington, D.C., and Los Angeles. The great way to see the country, though, came with a cost. Denny recalls being away from home more days than he would have liked and watching Dennis switch elementary schools three times within the span of only a couple years.

Focusing in on something a bit more stable, Denny began a six-month training program to become a general manager for Marriott. It was here that he learned to maneuver a chainsaw for ice sculpting before becoming the general manager of the St. Louis Marriott Pavilion Hotel. He realized, though, that less travel did not necessarily mean less stress. He recalls one evening where he was tasked with tracking down two of his valet drivers who had snagged two Mercedes-Benz cars for a joy ride. 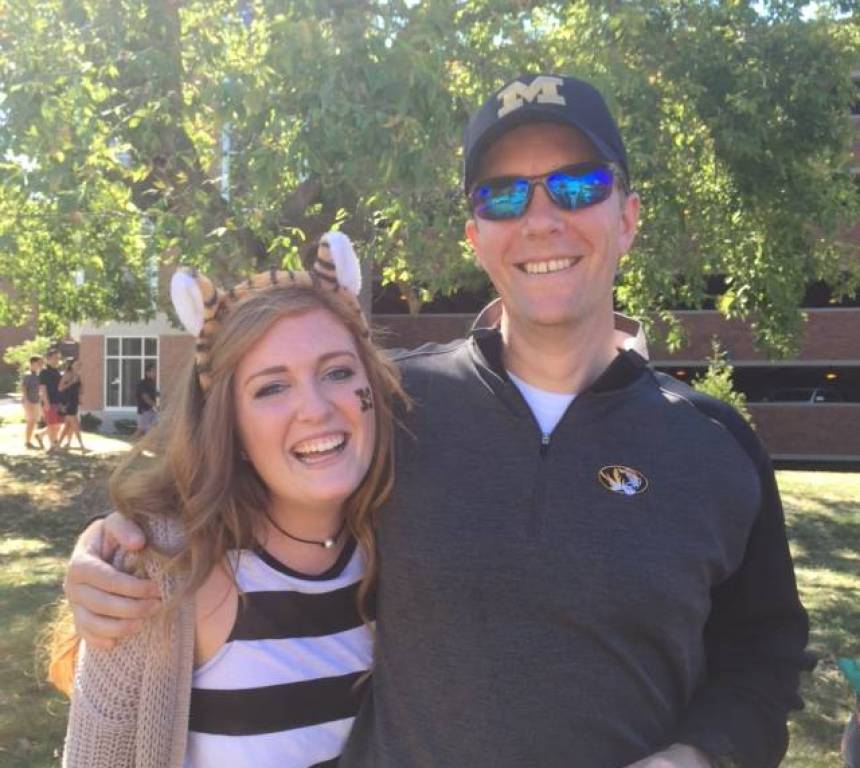 Morgan and Dennis at MU

The year 1982 marked the end of the serious traveling phase of his career and sparked the beginning of what would become a now 35-year partnership with the hospitality management program at MU. The program at the time was under the Department of Food Science.

Originally the degree was an emphasis in “Food Science and Nutrition,” but was eventually changed to better represent the field and titled “Hotel and Restaurant Management.” Additionally, Denny developed a course that brought students to St. Louis over their breaks from school to tour hotels and shadow industry professionals. An advisory board for the program was also formed, bringing together those who had a stake in ensuring that future hospitality students were well prepared. Among them were Robert O’Loughlin, now chairman and CEO of Lodging Hospitality Management in St. Louis, Vince Bommarito, owner of the famous Tony’s Italian restaurant in St. Louis, Edward L. Baker, vice president of Executive Hotel Management in Baton Rouge, Louisiana, and Dick Walls who owned the Columbia restaurant Boone Tavern.

Before long, Denny says, “the students were finding us.”

What he did not know at the time was that he was setting up the program that his son Dennis and granddaughter Morgan would end up pursuing as well.

Dennis started his academic career at the University of Kansas to study architecture, something that his father is convinced was done solely to irritate him. Dennis tells a slightly different story, saying that the decision had more to do with KU winning a national championship in basketball during his senior year of high school in 1988. After a few years, however, Dennis began to question his career path.

He called on memories of his dad taking him to the hotel as a kid and throwing Christmas parties at the house for his managers. The following semester he enrolled at MU in their hotel and restaurant management program. Dennis says the department had a close-knit, fraternity-like feel to it.

“It wasn’t like anything else in school that I had ever been a part of,” Dennis says. “I actually enjoyed school for the first time in my college career.” 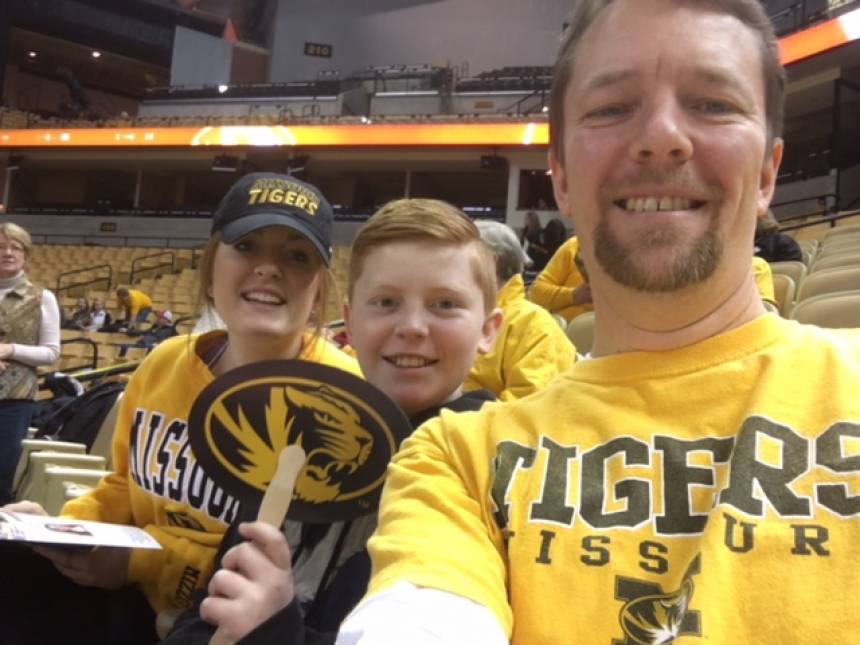 He says that it didn’t hurt that Stringer also served as his mentor and that he was guided by professors.

“They were very, very hands on and very thoughtful … they understand that this is an eat-sleep-breathe business,” Dennis says. “They pushed us in the direction that they saw we fit best.”

Dennis graduated and worked in the restaurant business starting at KC Masterpiece BBQ in Chesterfield, Missouri, in 1993. After a few years, looking for an opportunity to learn and grow, he accepted a position with Marriott St. Louis West and in 1999 subsequently opened a restaurant, Bond’s Steak and Oyster Bar. Shortly after, he returned to the hotel business and transitioned to working as a food and beverage director.

He credits the atmosphere for drawing him to the position: “I knew I was not a 9-to-5 guy. I like the energy of restaurants – TV’s are on, people are partying, cheering for their sports teams.”

He also cites the perk of holding the only job in the hotel where a liquor company representative can come in to say, “Hey, let’s try some bourbon.”

Most recently, Dennis has worked at the Holiday Inn Executive Center in Columbia – the same location where his daughter Morgan now works.

“She fits perfectly into this business,” her father says. Her grandfather took it a step further: “She’s better than either one of us.”

Like her father and grandfather, Morgan initially had no plans of pursuing a career in hospitality. Dissuaded by her family’s stories of long and unexpected hours, she started out majoring in business. It was not until working at the hotel with her father that she realized she had a different calling. Morgan now hopes to work in every division of the hotel before she graduates in May of 2018 to prepare herself for her dream of being a general manager one day.

“When you find a job where you don’t ever complain about going, I feel like that’s where you’re supposed to be,” Morgan says. “I can’t stray away from where I’m supposed to be.”

While the hospitality industry may have been in question, MU was set in stone.

“I knew the second I stepped foot on campus that this is where I wanted to go,” she says. 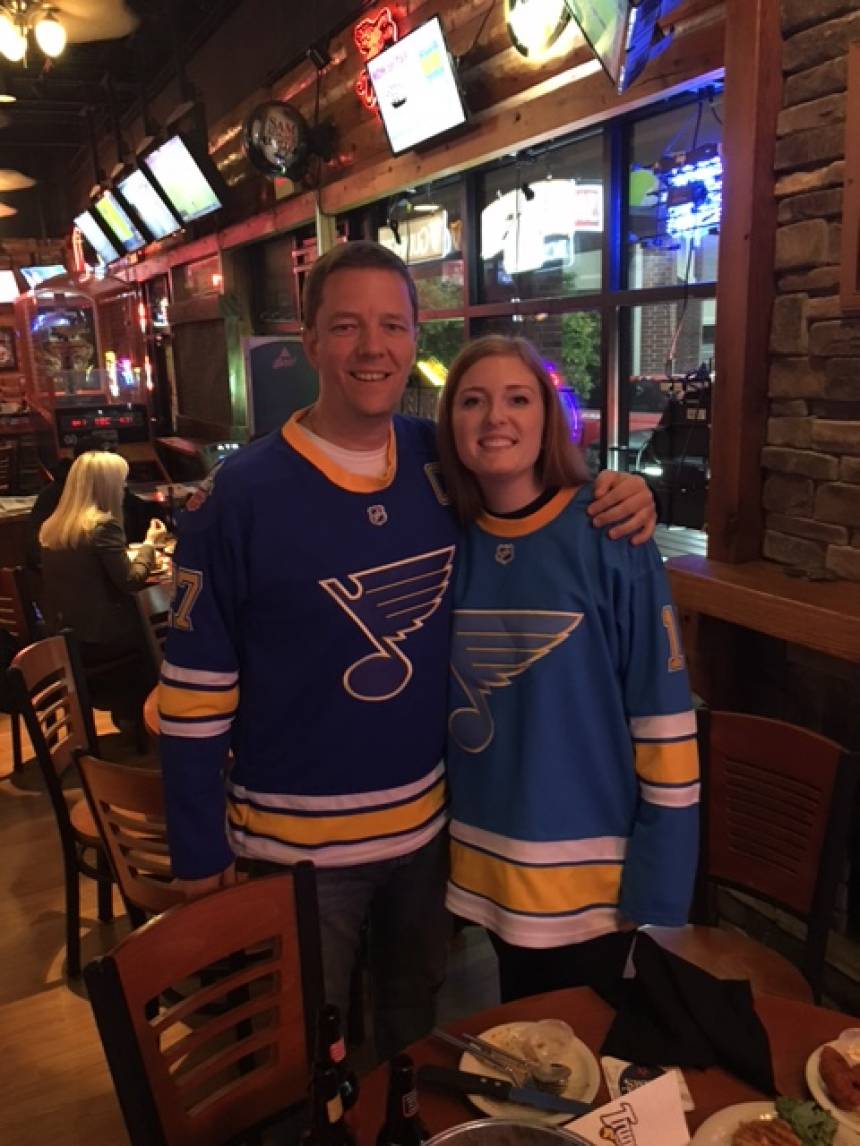 After 11 years in Baton Rouge, Louisiana, working at the Crowne Plaza and Holiday Inn, Denny is about to call Columbia home as well.

Upon arrival, Denny has found a spot at the Holiday Inn to work alongside his family.

“I’m so happy my son and granddaughter are in the industry,” he says. “I think we will be a triple threat out there.”

While visiting Columbia, Denny stayed at the Holiday Inn and was reminded why he loves what he does. One evening, both Dennis and Morgan were working and hosting the University of Arkansas softball team and the MU College of Veterinary Medicine’s Gentle Doctor Benefit, an annual non-profit gala that raises money for scholarships. This year the party was 1970s-themed with many donning a John Travolta look.

“The hotel was rocking and rolling,” Denny says. “I ended up in the party with the people with the John Travolta outfits. It went well and everybody had a good time.”

Despite the fact that they spoke separately, when all of the Bonds talked about their passion for hospitality, their words closely mirrored one another.

“It’s the fact that you do something different every day,” Denny says.

“It’s doing weddings and bar mitzvahs and 50th wedding anniversaries and being part of things that are once-in-a-lifetime moments for people,” Dennis says. “We make memories here.”

“None of us can ever sit down. We like to walk around. We like to talk to new people,” Morgan echoed. “Why would I go anywhere else?”