At that time, only 5 percent of cotton fields in the Missouri Bootheel region were being scouted for insects. In just 15 years, that number had grown to 76 percent.

The school celebrated its 36th year of teaching students, farmers and co-op employees the art of scouting cotton and other crops in 2017. The school has continually grown and expanded its breadth of information. Now, nearly all cotton fields are scouted in the region.

“Farmers face numerous economic decisions on a daily basis,” said Victor Roth, an area crop consultant. “Insects can obviously cause a lot of problems in crops, so scouting those crops for possible problems is a key part of owning land.”

While scouting programs did exist, Ray Nabors and Allen Wrather wanted to take scouting to the next level. The duo, who both worked with the Fisher Delta Research Center, developed an extensive school that would dive deep into scouting.

“A lot of the programs in Missouri were held on weekends and offered brief training,” Nabors, an entomologist, said. “We wanted our school to be much more comprehensive. We wanted our students to be truly certified in crop scouting.”

The school offered not only a high-quality curriculum taught by experienced faculty, but also hands-on experience led by knowledgeable professionals.

Crop scouting is an important part of a farmer’s integrated pest management strategy. Scouts assess fields and provide landowners with information relating to pest infestations and disease. That information is vital as the decisions farmers make have economic and environmental impacts.

The school is held over a three-week period in the month of February. From Monday to Thursday each week, students spend four hours a night learning the art of scouting. Each evening includes three hours of presentations on a specific crop and another hour in an insect lab. Each student is then given a final exam to test what they have learned over the course of the school. 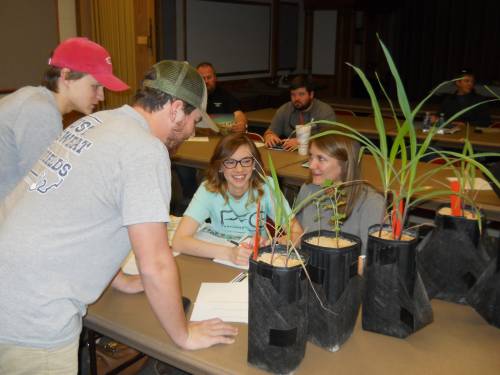 There are 30 students accepted into the school each year. The school is so popular that the class generally fills up within a week of registration opening.

Nabors said the students generally come from three different groups – individuals who are interested in learning more about crop scouting, farmers and their families, and co-op employees.

The first group is made up college students, high school students and others who have an interest in crop scouting. Several of those students come from Southeast Missouri State University. Those students earn three hours of collegiate credit for taking the class and passing the final exam.

“My daughter was actually able to pay for her degree at Mizzou by performing crop scouting during the summer while she was in high school,” Nabors said. “We have a lot of students who do the same. Crop scouting is the same as any other summer job on the farm.”

The second group includes farmers or members of their family. This group generally consists of individuals who are looking to scout their own crops or gain a deeper understanding of what goes into crop scouting.

The third group is made up of new employees of the local co-ops. These companies have long understood the importance of having their employees understand the ins and outs of crop scouting.

“Crop scouting is tough work, and I’m glad to see how the school has grown over the years,” Nabors said.

Cotton was the primary focus of the school early on. The school has expanded to include wheat, milo, soybeans, rice and corn as well. It takes months to properly prepare for the school so that the students can see the crops in different stages of the life cycle. Plants are grown in a greenhouse so that each lifecycle is represented. Insects are also collected so students can see the physical bug and not just a picture. Each student also receives the most up-to-date literature on crop scouting.

The school includes discussions on the pathology of plants, soil information, as well as weed issues.

An Uptick in Scouting

Roth began his own consulting business in 1975 after earning an agriculture degree from MU. He’s still offering crop consulting today.

Roth said Mizzou scout training actually dates back to 1972. Roth worked with Flernoy Jones, an MU Extension entomologist, for a year while attending Mizzou. Jones managed an extension scouting program during that time and crop scouting was a part of that program. Roth developed a strong interest in scouting during that work with Jones.

“I was looking for a job after graduation and a lot of people encouraged me to get into scouting,” Roth said. “I’ve had my business for 42 years now, doing various things, including scouting and soil sampling.”

“We want our students to practice the proper scouting protocols. We focus on providing our students with tools that will make them as accurate as possible as crop scouts.”
―Ray Nabors, entomologist and co-creator of the Crop Scouting School

Roth actually attended the Crop Scouting School at Fisher Delta a few years after it began.

“It’s definitely a valuable tool,” Roth said. “Early on, we didn’t have the Internet, so the only way you could find information was to meet like this and discuss topics. Even as the technology has offered us more and more information, the scouting school has added new experiences that you can’t get anywhere else.”

One of cotton’s biggest irritants is the boll weevil insect. This tiny pest feeds on cotton buds and flowers. A strong winter eradicated the boll weevil in the Bootheel area in the mid-1970s. Nabors said the insect made a comeback in 1986 and caused extreme problems in 1989. That led to an uptick in the interest in crop scouting.

“That heavy boll weevil infestation was a driving force for scouting popularity,” Nabors said. “More than 100 people tried to enroll in the Crop Scouting School that year.”

Nabors said scouts can cover 1,000 acres on a good day. There have been numerous techniques employed by scouts throughout the years. Nabors said one of the old models consisted of the scout splitting the field into four quadrants and scouting each quadrant, along with the middle of the field. The focus was to collect around 100 plants from four to five different locations. Now, scouts inspect around 50 plants from 10 locations for insects and diseases.

“We want our students to practice the proper scouting protocols,” Nabors said. “We focus on providing our students with tools that will make them as accurate as possible as crop scouts.”

Nabors is proud of several aspects of the school. Teaching people the importance of scouting is toward the top of the list. Nabors is most proud of one facet, though. The school has brought numerous women into agriculture.

“When we began this school, there weren’t a lot of females in agriculture,” Nabors said. “This school really opened that door up.” 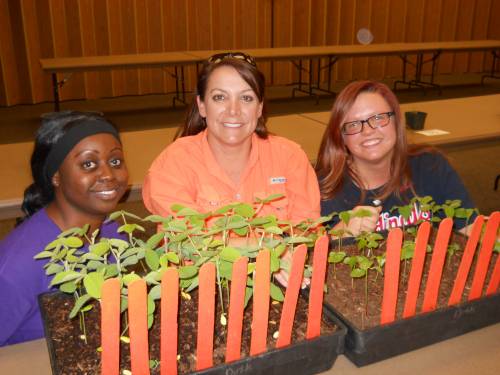 Andrea Jones (middle) participated in the Crop Scouting School in 1995 and has directed the program since 2013. Photo courtesy of Andrea Jones.

Many of the women who attended the school were wives of farmers who were looking to keep their crops scouted. These women play an important role on the family farm, and being able to scout crops was just another tool they could add to the tool belt.

Nabors said he had several women through the years switch to agricultural professions after getting involved with the school, including becoming crop scouts.

Andrea Jones has always had a passion for agriculture. She participated in the class in 1995, a year after completing her degree at Southeast Missouri State University. Jones is a research associate at Fisher Delta – and has been the director of the Crop Scouting School since 2013.

“Andrea has done a heck of a job keeping the school relevant and providing important information for the students,” Nabors said. “The school is as good as it’s ever been.”

Jones spearheads each aspect of the school, setting up the speakers and making sure the literature for students is up to date. She is in charge of growing the plants in the greenhouse, as well as collecting the insects.

“Specialists from the Fisher Delta Research Center, MU Extension and neighboring universities provide knowledge to help ensure students, farmers and employees are equipped to inspect and report conditions found in field crops,” Jones said. “Classes are a lot more than just reading facts about crops and insects. We offer hands-on experience during each stage of our program.”

Nabors still plays a role in the school, too, providing entomology expertise for the class each year.

“Andrea and Ray do a phenomenal job of planning and executing a first-class scouting school each and every year,” said Trent Haggard, director of the Fisher Delta Research Center. “In addition, all of the instructors from our Center, as well as the guest instructors, do a great job of preparing and teaching.”