Members of the Don Heil family were on hand at the U.S.… Expand ▸

Wiebold, director of the Missouri Soybean Center, made the announcement at the second annual U.S. Soybean Symposium on the MU campus. He said Heil became a valued mentor and friend when Wiebold joined the MU faculty.

He served as president of American Soybean Development Foundation that helped allocate soybean checkoff dollars for soybean research, promotion and international market expansion. He was a founding member of the United Soybean Board, an officer of the American Soybean Association and representative on the National SoyDiesel Development Board, which later became the National Biodiesel Board. 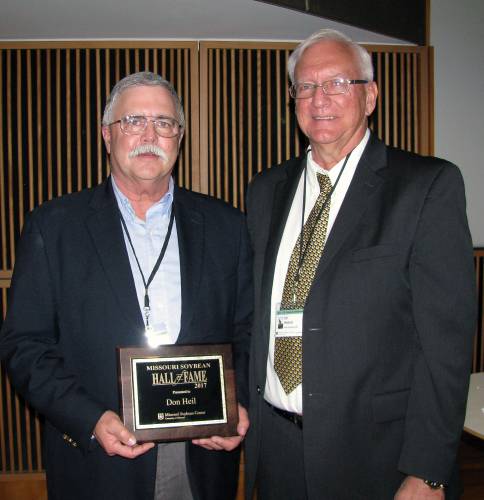 In 1982, he and others organized the Norborne Soybean Festival and promoted Norborne as the “Soybean Capitol of the World.” He was the first “King Soybean” of the celebration.

His association with MU lasted many years. He served on the MU Dean’s Advisory Council and was president of the College of Agriculture, Food & Natural Resource’s Foundation Board. Heil was on the MU Extension Council and a supporter of Extension and FFA programs. Agricultural Extension Professionals recognized Heil in 1988 with the Agricultural Leaders Award. He and his wife were avid supporters of MU football.

He helped develop the Agricultural Leaders of Tomorrow (ALOT) program and served on its advisory board. In 1993, he won the ALOT Leader of the Year Award. The Chamber of Commerce also recognized Heil for his contributions and he was active in Missouri Farm Bureau.

U.S. Sen. Christopher (Kit) Bond presented Heil with a copy of the Congressional Record in recognition of his work for his work on passage of the national soybean checkoff.

He served in many capacities in his community and church. He began farming in 1946 after attending MU and serving as a navigator in the Army Air Corps.

He was early adopter of land grading to improve surface drainage and water management of northern Missouri farmland.

Heil and his wife, Vi, were married more than 50 years before his death in 1995. They had three daughters and son-in-laws: Charles and Donna Foor, David and Karen Durham, and Brian and Jan Blankenship; two sisters, Kathryn Tiemann and Lucille Lane; numerous grandchildren, great-grandchildren and nieces and nephews at the time of his death.

“His spirit and passion continue today in those he mentored and inspired,” Wiebold said. “Don was a humble family man and farmer who helped shape the soybean industry as we know it today. But to him, it was always about helping his fellow farmers.”