In 321 Mumford Hall, Mark Fenner pointed to a chair in the middle of the classroom during a presentation to an agricultural marketing class.

“I was sitting right there, in your place, when someone came from MFA to talk to our class,” he said.

When Fenner was a student in the University of Missouri College of Agriculture, Food and Natural Resources, an executive from MFA attended one of his undergraduate classes. The notion that an industry professional would provide insight and advice to students impacted Fenner as a student, and still does even after a role reversal a few decades later. 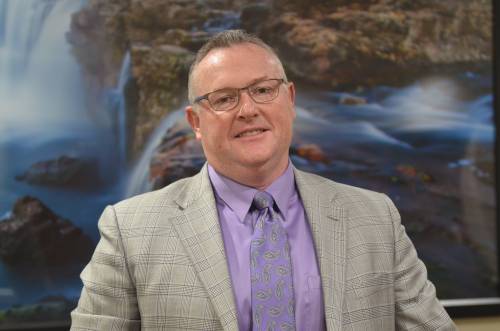 “It made an impression on me that someone would take their time to come in and meet with the students,” Fenner said, “so I feel like it’s a way for me to give back to the university that I care a great deal about.”

Today, the president and CEO of MFA Oil is focused on giving back to his alma mater and returning the favor. On March 22-23, Fenner came back to campus as CAFNR’s 51st Robert O. Reich Executive-in-Residence. The program brings industry leaders, many of whom are MU alumni, to the College to share their knowledge and experience with students, faculty and staff.

From environmental considerations to the challenges of change in an organization, Fenner proved to be a reservoir of knowledge throughout the many lectures, meetings and discussions during his time on campus.

The operational aspects of MFA Oil, as well as discussion of alternative fuel sources, ignited dialogue about both the company’s and the university’s research and use of various fuel sources. Case studies of company acquisitions provided agribusiness management students with a real-life look into the financial and managerial decisions made by company leaders. Candid conversations about risk management, environmental challenges and ethics in business with students and faculty brought about opportunities for Fenner to discuss MFA Oil’s unique management practices and company mentality.

In a presentation to agricultural sales students, Fenner gave insight to young people soon entering the workforce – advice he said he wished he’d heard back when he was in the classroom.

“Keep an open mind… life is going to throw you curve balls, It is how you deal with those curve balls.”
―Mark Fenner

“You’ve got to enjoy every step of the journey and you always have to work hard in everything you do, but you need to enjoy it too and have some fun,” he said. “You don’t have to know exactly what you want to do for a living, either.”

Fenner, who proclaims to have “never sold anything in his life,” looked back on his unexpected start in a sales position, and how that opportunity was a critical step in his career. He encouraged students to be open to opportunities that present themselves and always be flexible when change occurs.

Making a career of cooperatives

Fenner earned his B.S. in agricultural economics from MU in 1985. Right after graduation, he dove into the world of cooperatives with sales and management roles with Farmland Industries, eventually serving as the national account director for the south region for Cenex Harvest States (CHS).

In 2012, Fenner joined MFA Oil as the chief operating officer. In 2014, he was elected president and chief executive officer, and has focused on growing company operations across the Midwest and exploring new opportunities for franchising and energy acquisition.

For Fenner, working for a cooperative has many benefits. Beyond paying patronage back to the individuals involved in the cooperative, the dedication to rural communities and unique governance make companies like MFA Oil starkly different from publicly-owned corporations, he said.

“It’s a very noble cause, to work for a company that gives back to the farmers and people who are a part of it,” Fenner said. “I’ve worked for cooperatives throughout my career, and I wouldn’t want to work anywhere else.”

Fenner said he sees the future for MFA Oil and the agriculture industry being one of opportunity and innovation, and students being a key catalyst.

As part of its mission to give back to local communities, MFA Oil has maintained a close relationship with the university. The company, in partnership with MFA Incorporated, recently endowed the MFA Professorship in Agribusiness to advance agricultural education and research at MU.

“The university does a lot of really great research and development,” said Fenner. “It’s kind of a natural fit for us to have a strong relationship.”

Growth is on the horizon in Fenner’s mind, and he said he hopes that his time spent on campus sparked interest and provided the same valuable insight he received in Mumford Hall a few decades ago.

The Executive-in-Residence program board extends invitations to two industry executives each year – one in the fall, and one in the spring. See the list of previous executives.

Submit a nomination for the Executive-in-Residence program.