A national tomato growers supply company will honor a Missouri Advanced Master Gardener this spring by selling tomato seeds she saved for decades.

On the cover of its 2017 catalog, the Tomato Growers Supply Co. features “Mrs. Maxwell’s Big Italian,” an heirloom beefsteak tomato prized for its flavor. The dark pink tomato is the result of seed-saving by the late Sally Maxwell of Mexico, Mo.

“Heirloom tomato varieties have become increasingly popular among gardeners,” said David Trinklein, University of Missouri Extension horticulturist. “In addition to being prized for their taste, many heirlooms have historical significance and sentimental value, having been passed from generation to generation over the years.”

Sally Maxwell’s son, Tom, grows “Mrs. Maxwell’s Big Italian” at Maxwell Garden with his spouse, Calvin, owner of Mackey Produce. Like his mother, Tom saves a limited amount of seed each year from the first and best tomatoes. 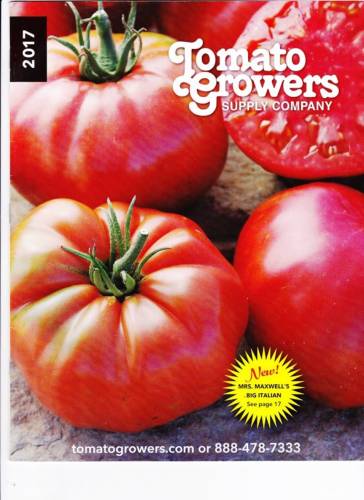 “Mrs. Maxwell’s Big Italian” is featured on the cover of the Tomato Growers Supply Company’s 2017 catalog.

Tom, 59, says he follows the same practices his mother used for more than 50 years. She received the first tomato seeds from a German immigrant neighbor, Mrs. Shoup. The seeds originally came from Italy.

Saving seeds is a demanding process.

“It is a mega-space-, mega-time-consuming operation,” Tom said. “It’s not just a thing that you wake up one morning and decide to do.”

His desire to honor his mother inspires him to carry on the practice. Tom slices tomatoes and removes the seed and gel from the tomato cavities. He washes off the gel and puts the seeds on paper plates to dry. After they are dry, he covers the seeds with paper towels and stores them in containers with packets of silica gel and then refrigerates them.

Tom starts the tomato seeds in well-ventilated high tunnel and conventional greenhouses. He places seeds in a mix of soilless medium and compost in packs. After they grow tall enough, Tom plants them in a garden that is isolated from other tomatoes to prevent cross-pollination.

“Most mom and pop operations don’t make money anymore,” Tom said. “It started as a hobby and grew and grew. Now I’ve got it back down to a hobby.”

Maxwell’s parents, Harold and Sally, started the greenhouse in 1969 at their farm between Rush Hill and Laddonia. They gave excess plants and produce to friends and neighbors. By 1974, word spread about the flavorful “Mrs. Maxwell’s Big Italian” tomato, and the Maxwells could no longer keep up with demand. They sold produce at the farm and on Mexico’s town square.

After Harold’s death, Sally and Tom moved to the current location. Sally worked at the greenhouse until her death at 96, even after severe osteoporosis made working difficult.

Sally is a Mexico gardening legend, said Sue Priest, a Master Gardener and retired schoolteacher. By age 4, Sally noticed differences in how some weeds grew. She experimented with ways to get the less prolific ones to grow better. Her love of growing plants continued to grow throughout her lifetime.

Each year, the Maxwells hand-propagated 100 or more geraniums from a rosebud geranium passed down from Sally’s aunt. “Slipping Day” took precedence over everything else — including Christmas dinner. Many, including Tom, still grow the geranium with its delicate buds. 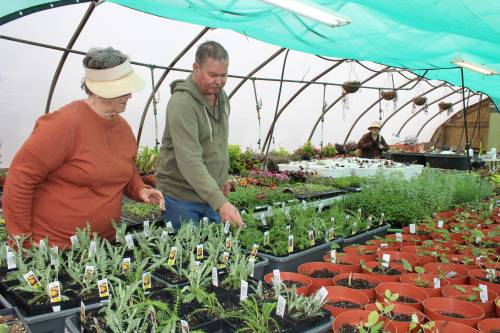 Priest said Sally gained acclaim in Mexico for her obsession with “dead-plant” trips. She would buy hundreds, sometimes thousands, of dollars of discounted plants and revive them.

“She was very giving with her flowers,” Priest said.

Sally and Harold shared a love of reading books about horticulture each evening. They often attended classes at the University of Missouri and through MU Extension to learn how to improve floral and vegetable production on their farm. They regularly volunteered at MU Extension 4-H fairs and flower and vegetable shows.

“Their garden was their playground,” Tom said.

Sally was in her 80s when MU Extension horticulturist Jim Jarman offered Mexico’s first Master Gardener class in 2004. She, Tom and Calvin were in the first class of 12. The Mexico club formed in 2005 and Sally remained active in it until her death. She had only one request when pre-planning her burial. She wanted to be buried wearing her Master Gardener pin. Even in death, she wanted to remind others of the joy that gardening and Master Gardener membership meant to her.

“I told someone that when Sally got to heaven, God better get some more dirt,” Priest said.

Master Gardeners is a program offered through MU Extension. For more information, go to mg.missouri.edu.