When working in the laboratory, Paul J.D. Whiteside has a few favorite sayings to help him through the trials and tribulations of his endeavors. The first one that comes to his mind? “I’d rather be lucky than good.”

“It’s something that my granddad says and my dad says it, too,” says Whiteside, a third-year doctoral candidate in bioengineering who works in the lab of Heather K. Hunt, assistant professor in the Division of Food Systems and Bioengineering, in the Agricultural Engineering Building. “I said it in the lab and Ben sort of picked up on it.” 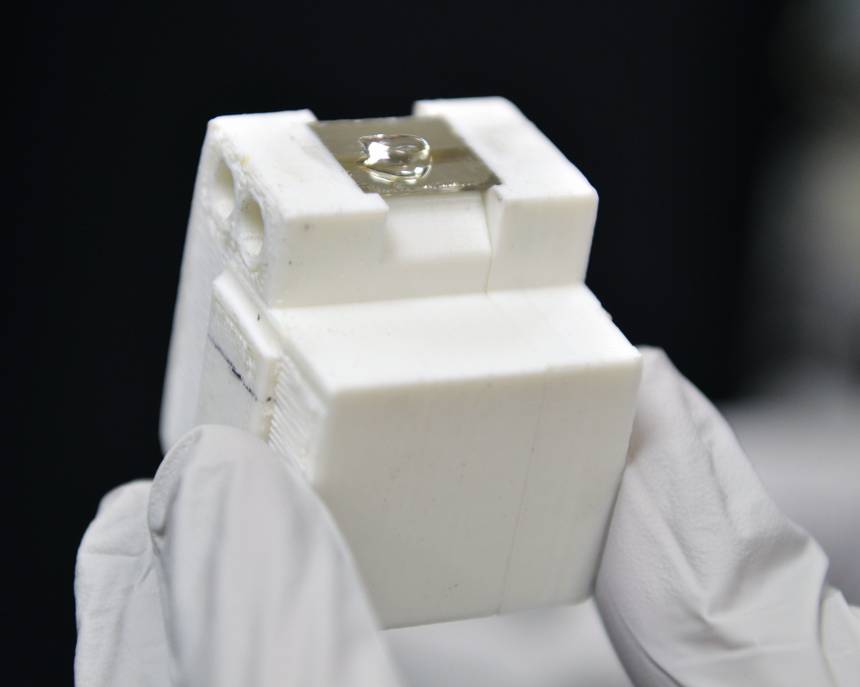 A close-up of the specialized waveguide that helps deliver laser light with higher accuracy, efficacy and safety than its predecessors. Photo by Stephen Schmidt.

That would be Ben Goldschmidt, a former Ph.D. student in bioengineering who worked in Hunt’s lab with Whiteside before taking a job as a research assistant professor of biomedical engineering at Duquesne University in 2014.

“Sometimes you can plan things out as much as you like, but no matter how much you plan, things can still go wrong… unless you’re lucky,” Whiteside says, giving further explanation to the quote.

In the summer of 2013, Paul and Ben encountered a little bit of luck when they came to the realization that the two separate projects they were working on could form a new technique that could change how a variety of clinical laser treatments are performed – including tattoo and hair removal – by making the processes safer and more efficient for both patient and clinician alike.

Their discovery – that they could transmit laser light into the tissue through direct contact, rather than through typical open-air transmission – had a wide range of implications, including resolving safety concerns in laser dermatology, advancing clinical photoacoustic imaging, and eventually leading to the development of a technique being called Sonoillumination to improve laser transmission through the surface layers of skin. 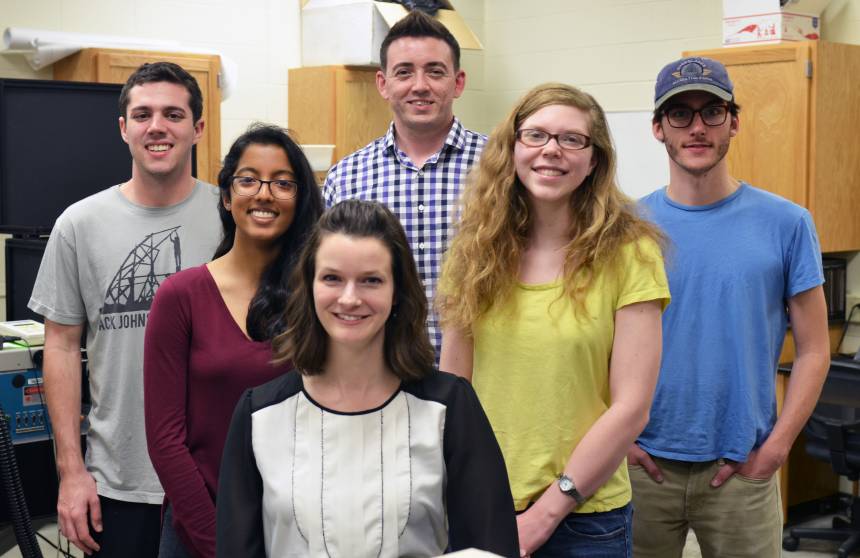 “We were pretty excited. We spent an afternoon just writing down things we could do with it and we filled a white board with at least 50 or 60 different things,” says Whiteside, who this past weekend (on April 9) gave a presentation to a room full of laser clinicians at the annual conference of American Society for Laser Medicine and Surgery, less than two months after having an academic paper he co-authored, “Ultrasonic modulation of tissue optical properties to increase transdermal light transmission,” accepted to the society’s journal.

The article is co-written with Hunt, Chenxi Qian (a former undergraduate research assistant in Hunt’s lab) and Dr. Nicholas Golda, associate professor of dermatology and director of dermatology surgery at the MU School of Medicine.

“We were just sitting there talking about a bunch of different things,” Goldschmidt recalls. “I don’t remember who brought up the idea, but it was something along the lines of, ‘It would be cool if we could combine projects or just make a better imager or come up with some really great idea that would revolutionize something in science.”

Whiteside and Goldschmidt have been close friends ever since first meeting each other in the laboratory of John Viator in 2009. Whiteside worked as an undergraduate research assistant in the lab of then-MU assistant professor Sherman Fan, who shared a lab space with Viator, whom Goldschmidt was already working for at the time.

Whiteside joined Viator’s lab when Fan left for the University of Michigan later that year. The two were fully engaged in Viator’s photoacoustics research before Viator left to start up the biomedical engineering department at Duquesne in September 2013. Whiteside and Goldschmidt then went to work for Hunt, whose own lab had shared space with Viator at the time. Hunt would go onto take over the advising duties for Goldschmidt’s Ph.D. dissertation, while serving as an advisor for Whiteside as well. 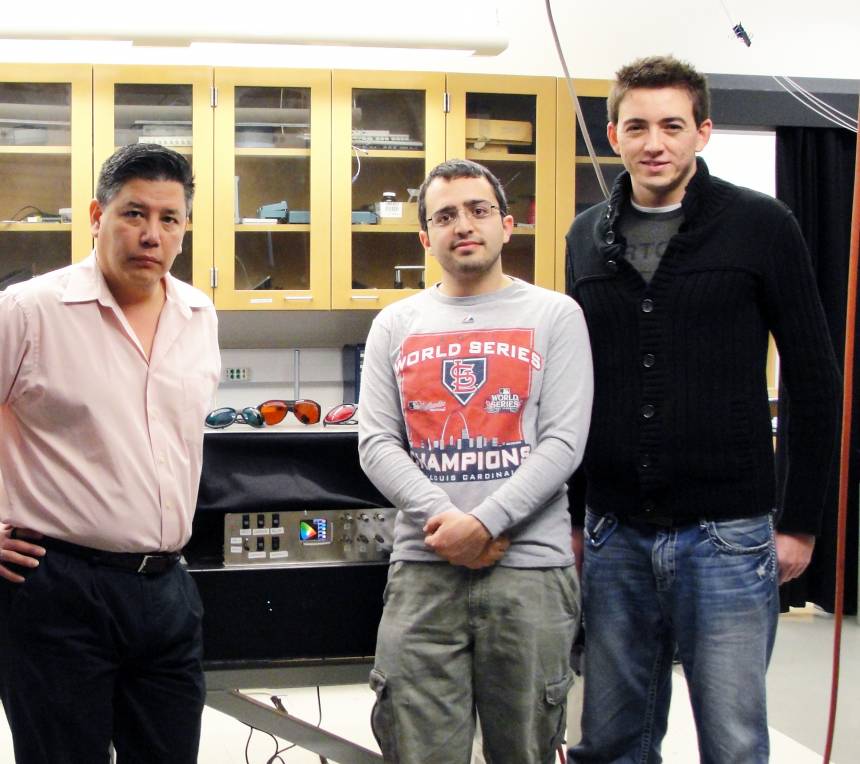 “Paul is very reserved and soft spoken and measured. Ben is really off-the-cuff and outgoing,” says Viator of the duo that will share a total of five degrees from MU between them come May. “They’re really complimentary in that sense. They are two different personality types and I’ve had them work on common projects and the combination is outstanding. There’s just a great synergy between the two.”

Hunt says that Whiteside and Goldschmidt both “have the ability to tinker with things, but not in a derogatory way. They are both makers in the truest sense.”

When speaking of Goldschmidt, Hunt says his ingenuity knows no bounds: “I swear you could drop him in a junkyard and he could build you something useful in under two hours.”

To date, Goldschmidt says that the most useful thing he has been able to build is a laser light despeckling system for improving eye surgery lighting. Using a pancake motor, which cost about 50 cents and make cell phones vibrate, he was able to eliminate the “laser speckle” issue that is associated with such procedures that results from combining three lasers together (red, green and blue) to create a white light that makes anything one looks grainy and out of focus.

“It was the cheapest and most satisfying solution to a problem I have come up with so far,” Goldschmidt says.

Goldschmidt grew up in between Harrisburg and Columbia as a fan of all things sci-fi, including “Star Trek” and “Star Wars.” So it’s only fitting that he is working on a current project with Hunt to build a device that could probe all of the properties of a material at once, much in the same way that he highly popular tricorder from “Star Trek” could scan any type of object and make a detailed scientific analysis.”

“Paul is very reserved and soft spoken and measured. Ben is really off-the-cuff and outgoing. They’re really complimentary in that sense.”
― John Viator

“It’s many people’s dream,” Hunt says. “Ben has a shots at actually doing it.”

When Viator arrived at Duquesne in 2013, he inherited four empty rooms. Now, his team includes four tenure or tenure-track faculty members, including Goldschmidt, who started teaching classes this past fall after being promoted to assistant professor.

Viator maintains good relationships with several people on the MU campus – including the Office of Technology and Industry Relations (OTMIR) who help manage the intellectual property started by the company he founded, Acousys Biodevices Inc. Looking back at this decision, though, to pursue another academic setting – the opportunity to start a biomedical engineering department from scratch was one that he could not pass up.

“It’s a unique opportunity that you don’t really see often… when someone gives you the opportunity to start your own little world,” says Viator, whose program should have more than 100 total students enrolled by next fall.

When you first listen to Paul speak, his origins are not extremely clear. There is a hint of a British accent, having been born in Liverpool, England – but it is muffled, an audio reminder of the fact that he has lived in North America since 1992, beginning with three years in Toronto, Canada, followed by many more in the Missouri cities of Joplin and Columbia.

“It’s because Paul doesn’t talk much, so he hasn’t lost his accent,” kids Hunt. 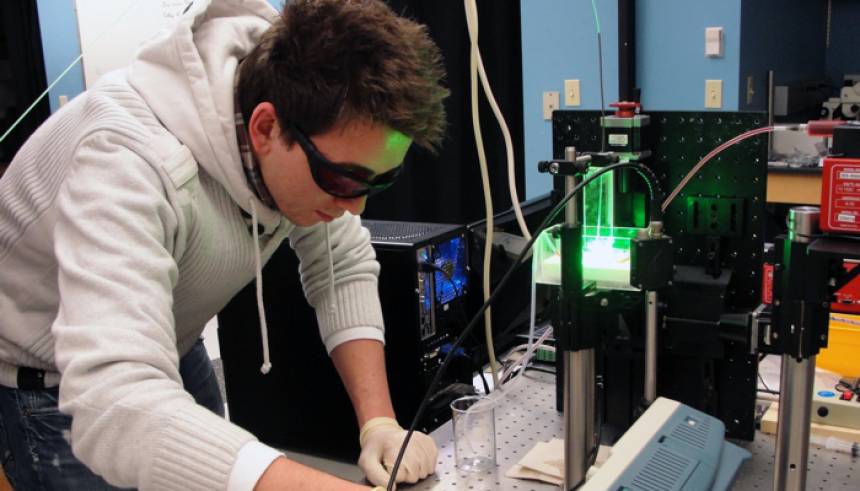 Paul J.D. Whiteside, seen here a few year ago, has been a student at MU since 2006. Photo courtesy of Paul Whiteside.

“Yeah, I’ve been here for ages,” adds Whiteside, who has dual citizenship in both England and the United States.

Whiteside’s family moved to Toronto when he was 4 years old after his father’s job with a paints and chemical company, Imperial Chemical Industries, took them overseas. The Whitesides would later move south to Joplin in 1995, where they would stay until Paul arrived at Mizzou as an undergraduate in 2006.

With Paul’s father being an engineer himself, an extensive workshop was always within reach that enabled the younger Whiteside to build – or repair – anything that that fascinated him at that time.

For the past 10 years, Paul and his father, Clive, have been engineering the refurbishment of a schoolhouse that dates back to the early 1900s into a homestead for Clive and Paul’s mother, Barbara, to retire – before a job offer sent them to West Lafayette, Indiana, a few years ago.

“We built it from the ground up,” Whiteside says. “It’s been a long time coming, but it’s almost done.”

The house sits close to the site of the former St. John’s Regional Medical Center, which was one of the worst-hit buildings when an EF5 tornado destroyed a large section of Joplin in May 22, 2011. 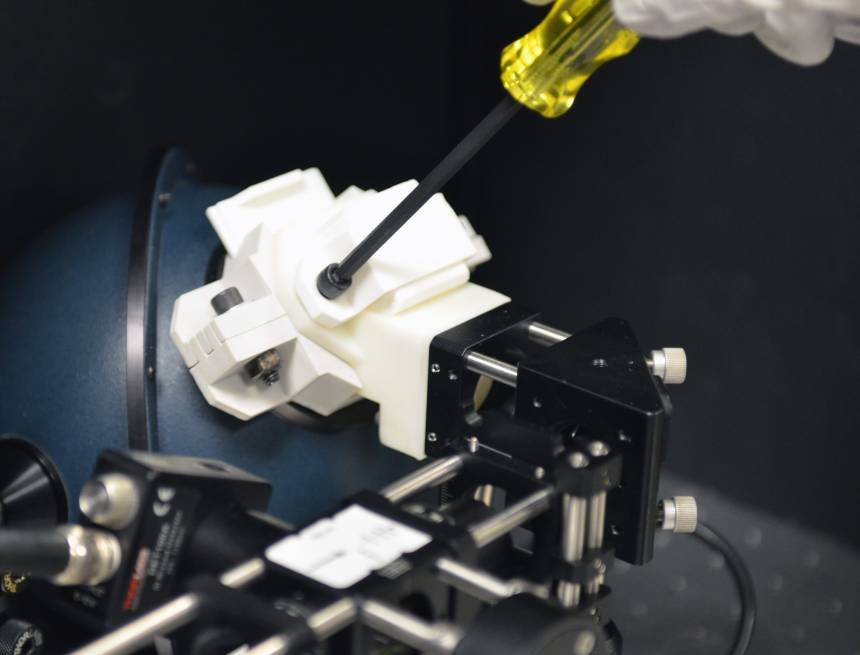 “Miraculously we weren’t missing a shingle, but if you walked a few hundred feet down the road, you’d see downed trees and then you would see the hospital just absolutely annihilated,” Whiteside says.

More luck: Paul’s parents were coming back from Colorado on that day. They got back a half an hour before the tornado hit, allowing them to take proper precautions.

“If it hit 30 minutes prior they would have still been on the road,” Whiteside says.

In addition to giving the presentation in San Diego, Whiteside is also preparing to defend his thesis centering around the waveguide technology on April 19, before graduating in May and pursuing a private industry job working for a medical device company. He has already made medical device prototypes – including a touchscreen graphical user interface – and done contract work for Kogent Surgical, based out of St. Louis.

Then there is the issue of trying to turn the newfound technique into a start-up company with the help of OTMIR – a process that has been in the works for several months. The Sonoillumination research was bolstered in 2015 by a Fast Track grant from the University of Missouri System through OTMIR under the name of “Ultrasound-enhanced laser dermatology.”

“He’s really good at finding a way to optimize something and to really make it work well and I think honestly that’s why this project and related projects have gone so well,” Goldschmidt says about his longtime friend. “Despite their complexity and despite the amount of work that goes into it, Paul is the perfect person to take it on.”